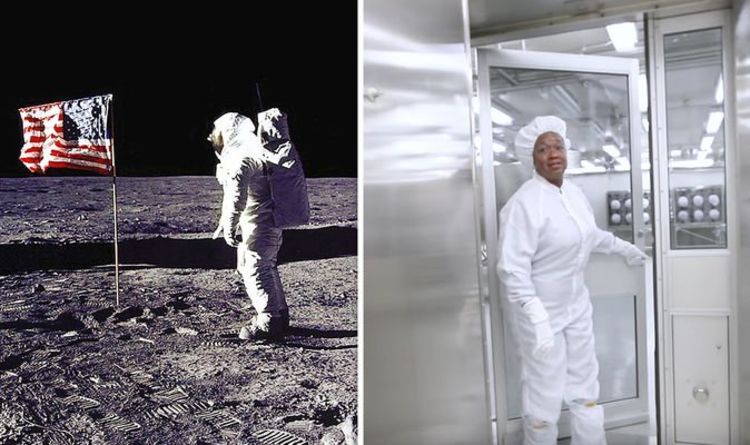 Neil Armstrong and Buzz Aldrin touched down on the lunar surface more than 50 years ago, yet NASA is still probing the samples they brought back on July 20, 1969, and the rest of the Apollo series. Apollo 11, like the six missions that followed it, had a primary objective to collect samples of the lunar surface – 382 kilograms in total – to help learn more about the history of the Moon and the Solar System. The lunar sample building at the Johnson Space Centre is the chief repository for the 400 Apollo samples and in June two were opened for the first time in 48 years, in what scientists dubbed “the Holy Grail” of samples.

However, there are more.

In fact, 15 percent of everything collected from the Moon are kept in a secret location, Andrea Mosie, the Lab Manager at the Johnson Space Centre revealed during the “Smarter Every Day” YouTube series a month later.

She told presenter Destin Sandlin: “This is the pristine sample vault, and all the samples are actually still stored in nitrogen cabinets, and also [separated] by mission.

“You can look up there, you can see the mission, just like that.

Then Mr Sandlin asked the key question, probing:  “Why don’t we have them in multiple locations?”

Ms Mosie admitted: “There is another remote facility that we have, just in case the Johnson Space Centre was destroyed.

“We have 15 percent of the samples stored in a remote location for storage somewhere else is all I can say.

“That’s why we call it remote.”

JUST IN: How NASA opened ‘Holy Grail of science’ after being locked and sealed for 50 years

Ms Mosie then went on to examine one of the samples, revealing to the cameras how they are studied.

She added: “Each one of them has a security seal on them, which means that we have inventoried every sample in those cabinets and we know our database has ever sample, every container number, every sample weight and description.

“We have a description of everything, all the rocks were described.

“Here’s an open tray with no seal on it and there are the Apollo 15 samples.”

The lunar sample lab has two side-by-side vaults, one for rocks still in straight-from-the-moon condition and a smaller vault for samples previously loaned out for study.

Around 70 percent of the original haul is in the pristine sample vault, which has two combinations and takes two people to unlock.

The rest is used for research, display or kept in the secure location.

It was the first landing by astronauts and NASA wanted to minimise their on-the-moon time and risk.

What is left from this mission – about three quarters after scientific study, public displays and goodwill gifts in 1969 – the rest is kept mostly vaulted at room temperature.