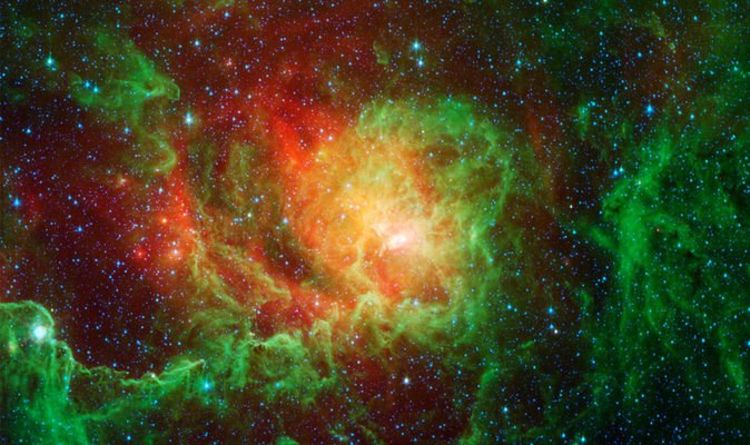 The nebula bears a striking resemblance to a carved out pumpkin. NASA footage shows a drawing overlaid on the image, clearly showing carved out eyes and a zigzagged mouth that appears to be screaming into space. NASA’s Spitzer Space Telescope uncovered the spooky image just in time for Halloween, nicknaming the structure the ‘Jack-o’-lantern Nebula”.

According to NASA, a star 15 to 20 time heavier than the Sun is likely to be responsible for creating the carved out structure.

In a statement, NASA said: “A recent study of the region suggests that the powerful outflow of radiation and particles from the star likely swept the surrounding dust and gas outward, creating deep gouges in this cloud, which is known as a nebula.

“Spitzer, which detects infrared light, saw the star glowing like a candle at the center of a hollowed-out pumpkin. The study’s authors have fittingly nicknamed the structure the ‘Jack-o’-lantern Nebula.’

“A plethora of objects in the universe emit infrared light, often as heat, so objects tend to radiate more infrared light the warmer they are.

“Invisible to the human eye, three wavelengths of infrared light compose the multicolor image of the nebula seen here.

“Green and red represent light emitted primarily by dust radiating at different temperatures, though some stars radiate prominently in these wavelengths as well. The combination of green and red in the image creates yellow hues.”

“Blue represents a wavelength mostly emitted, in this image, by stars and some very hot regions of the nebula, while white regions indicate where the objects are bright in all three colours.”

NASA further explained: “A high-contrast version of the same image makes the red wavelength more pronounced. Together, the red and green wavelengths create an orange hue. The picture highlights contours in the dust as well as the densest regions of the nebula, which appear brightest.

The image shows an outline of a face in a ring of blue stars with further groups of new stars form a nose and mouth. Each “eye” is the bright core of a galaxy, one of which slammed into another.

The violent encounter gives the system an arresting “ring” structure for only a short amount of time, about 100 million years. The crash pulled and stretched the galaxies’ disks of gas, dust, and stars outward.

Hubble observed this unique system as part of a “snapshot” program that takes advantage of occasional gaps in the telescope’s observing schedule to squeeze in additional pictures.

Astronomers plan to use this innovative Hubble program to take a close look at many other unusual interacting galaxies. The goal is to compile a robust sample of nearby interacting galaxies, which could offer insight into how galaxies grew over time through galactic mergers.

By analysing these detailed Hubble observations, astronomers could then choose which systems are prime targets for follow-up with NASA’s James Webb Space Telescope, scheduled to launch in 2021.