Navarro left a trail of political wreckage in California 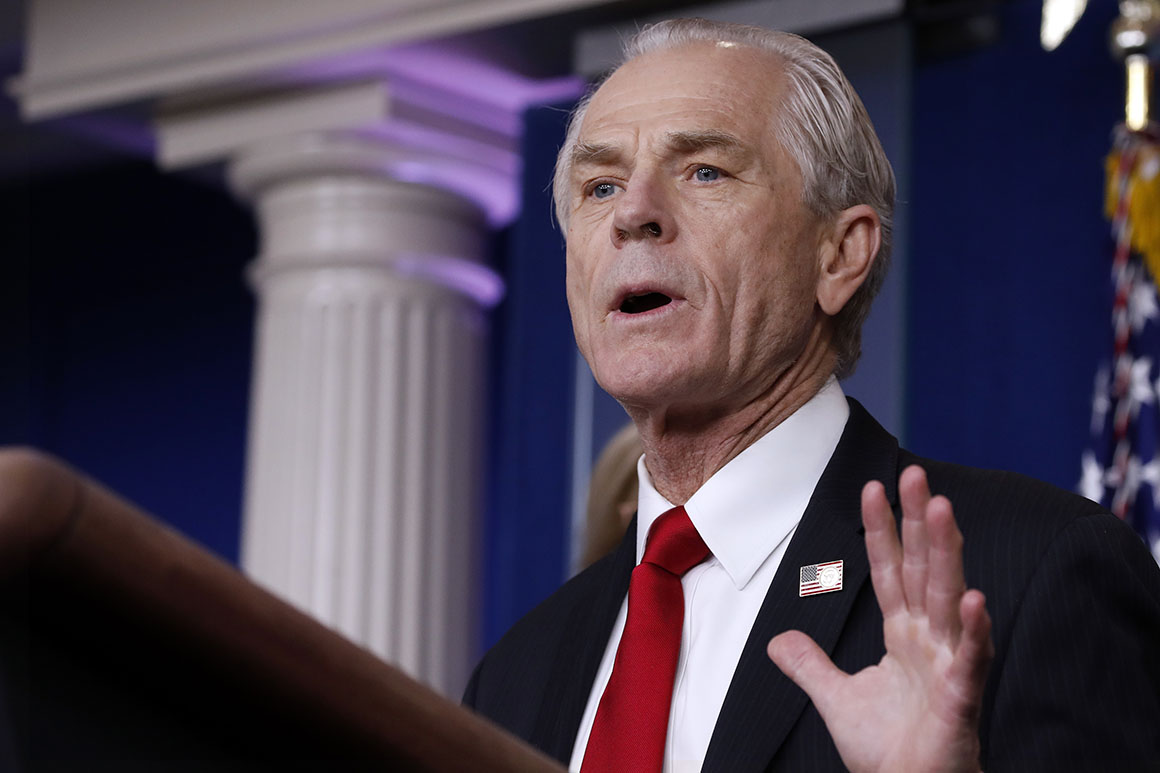 OAKLAND, Calif. — Long before Peter Navarro’s feud with infectious disease expert Dr. Anthony Fauci over a possible treatment for coronavirus, the White House trade adviser had a reputation as a political wrecking ball in California — where he ran in a handful of races as a liberal Democrat.

The combative and cocksure approach that mark his arguments for the use of the malaria drug hydroxychloroquine are familiar to California Democrats who assisted Navarro’s early political forays in Southern California, when he unsuccessfully ran for office in San Diego five times between 1992 and 2001.

Back then, they recall, Navarro’s temper and ego often proved to be his undoing in campaigns where he literally stood alongside Hillary Clinton, railed against then-House Speaker Newt Gingrich as the personification of political evil and positioned himself as a “strong environmentalist and a progressive on social issues such as choice, gay rights, and religious freedom.’’

In San Diego, Navarro “came on the scene as a disruptive force…as a force of destruction from the progressive left,’’ says Remer. As the founder of a no-growth group called Prevent Los Angelization Now, “he tapped into something that was very strong.’’

A former Republican and independent, Navarro made the switch to the Democratic Party after his independent run for mayor in 1992. In subsequent losing campaigns for city council, county supervisor and Congress, he dismissed the GOP as aligned to an “every man for himself” approach, at one point arguing that instead, “we ought to progressively tax the rich to help everybody else.”

“Anybody who knows Peter is shocked — like, how can a guy who said those things now be 180 degrees different?’’ said Mulholland, who assisted the party in pushing for Navarro, who touted himself as an environmental activist in the 1996 House race against Republican Brian Bilbray.

“It makes you wonder, because some people see life as a Broadway play…and they’re just playing everybody,’’ says Mulholland. “Peter may be that person…People do strange things to advance themselves.”

The White House did not return requests for comment for this story.

"Peter’s a smart guy, a good guy..and I think he’s done a wonderful job,” said Trump, when asked about memos Navarro had written in late January and February warning that the coronavirus could become a "full-blown pandemic."

California Republicans have been astounded by the turn of events.

“Peter Navarro’s profile in California politics was as a radical liberal,’’ says veteran California GOP strategist Rob Stutzman, a former adviser to Gov. Arnold Schwarzenegger. “One of the reasons he never caught on and got traction was that he was almost like a Ron Paul-type character on the left."

"But in the island of misfits that make up the Trump White House,” said Stutzman, who says Navarro’s past campaigns remain branded on the minds of many state Republicans, "frankly, he’s a survivor.’’

In his 1996 congressional race, Navarro’s most high profile political foray, he was endorsed by then-First Lady Hillary Clinton, who campaigned for him in San Diego, and he backed the re-election of her husband Bill Clinton for president.

Navarro argued that he was running “to take back the House from the extreme right wing of the Republican Party,’’ as personified by Gingrich, whom Navarro charged was “bulldozing America” in key areas like Social Security, Medicare and the environment.

Remer says Navarro positioned himself as a “no-growth” mayoral candidate in 1992, and won the backing of environmental groups like the Sierra Club when he ran for city council in 1993, and the county board of supervisors in 1994. In his final campaign effort in 2001, Navarro lost a special election to the county supervisors board, netting barely 8 percent of the vote.

Today, Remer says he’s not surprised that Navarro has wedged his way into Trump’s inner circle — or that he has stubbornly defended his credentials (a Ph.D in economics) on the issue of prescribing hydroxychloroquine, even though it’s put him in conflict with Fauci, the government’s leading infectious disease expert and the longtime director of the National Institute Of Allergy and Infectious Diseases.

“He totally had a sense of his own righteousness …and it may have been ultimately his undoing, because he was so totally arrogant about it,’’ Remer said. “I can totally see him taking on Fauci….it fits, because he really believes that he alone knows the truth.’

“We all know Peter Navarro in San Diego,” Nehring said in the deleted tweet. “He ran for office four times as a Democrat, each time moving around the county. He was defeated every time.”

San Diego Republicans say Navarro’s unfailing belief in his own intellect — coupled with his repeated efforts to win elected office — were at times the source of astonishment.

“He was a hothead who wasn’t quite sure when to bend, and when to back off…He was a guy who kept running against Republicans…with all the typical rhetoric you would expect from a Democrat,’’ said one GOP insider, who declined to be named for publication.

Navarro made so many bids for public office that it became an inside joke to some party regulars. “You know that game, ‘Where in the world is Carmen San Diego?’,’’ the insider said, recalling that one GOP operative “had a map on his office wall that was called, “Where in San Diego is Peter Navarro?” which featured “all the places he moved to, in order to keep running for office.”

More than one of those campaigns were dogged by headlines related to Navarro’s past troubles.

In his 1992 campaign for San Diego mayor, Navarro paid $ 4,000 in fines and court costs for violating city and state election laws in connection with loans received from his mother. The San Diego Union Tribune reported that then-Deputy City Attorney Richard Ostrow, who headed the city’s DA’s public integrity division, said the fines were leveraged because of “a pattern of disdain for the reporting laws that we’ve seen in the past from Peter Navarro.”

Navarro also “defaulted on a federally funded student loan” as a student at Tufts University, and was sued in 1979 in Boston Municipal Court by university trustees for his failure to replay the $ 1,652.83 loan, the paper said.

Navarro’s temperament and penchant for over-the-top political comments were his undoing in the often-fractious campaigns, says Remer.

At one point in his mayoral campaign, Navarro accused Republican Susan Golding of having a male prostitute on her campaign finance committee, a remark for which he later apologized. Golding had accused Navarro of accepting campaign funds from pornographers; Navarro said he was not aware the funds had come from owners of local adult book stores, the Union Tribune reported.

Today, watching Navarro’s performance from the White House, those who knew him and worked with him say the former San Diegan has never appeared to align himself with some of the more extreme or controversial positions of the Trump White House.

“I’ve never seen Peter, talk about, you know, Mexicans as criminals and rapists or, or any of the really homophobic or xenophobia and racist crap that’s come out of the Trump administration and their allies…and he’s always had respect for women,’’ says Remer.

Stutzman says Navarro’s current position is both revealing and ironic, considering his history in the nation’s most populous state.

“Peter Navarro goes to the White House to be a trade adviser — which is evidence of the thin line that exists ideologically between Bernie Sanders and Donald Trump in terms of isolationism and protectionism,’’ Stutzman says. “On immigration and trade, the Trump administration has been radically non-traditional Republican — and Navarro is evidence for that.”