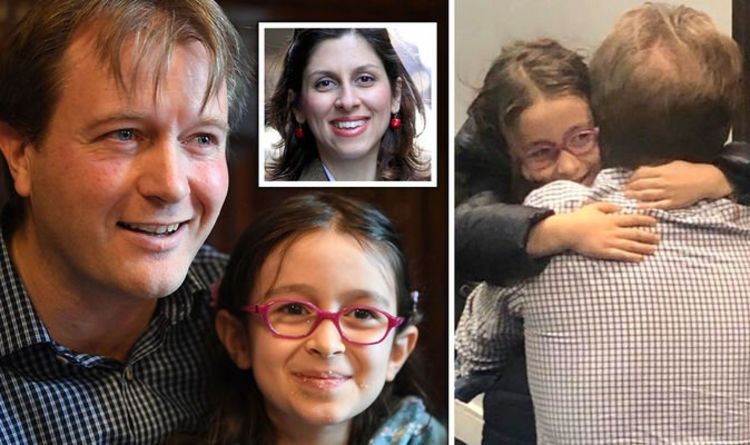 Gabriella Zaghari-Ratcliffe arrived back in the UK last night after having spent three and a half years livng with her grandparents in Iran. For the majority of her life, the five-year-old has had no contact with her father, Richard, and has only able to see her mother in sparing visits in jail.

In images which will melt hearts, little Gabriella gave her father a huge hug after landing in London, beaming with a huge smile as the pair were finally reunited.

It is thought she can start primary school in the UK and spend Christmas here with her dad.

Richard Ratcliffe said: “Gabriella came back to us late at night, a bit uncertain seeing those she only remembered from the phone.

“Now she is peacefully sleeping next to me. And I am just watching.

It has been a long journey to have her home, with bumps right until the end – and I am grateful to all those at the British Embassy and Iranian Ministry of Foreign Affairs who helped smooth all those last blockages.”

“It was a hard goodbye for Nazanin and all her family. But let us hope this homecoming unlocks another.”

This afternoon, both Richard and Gabriella attended a press conference at the House of Commons the celebrate being reunited, they were even presented with a “welcome home” cake to mark the occasion.

Mrs Zaghari-Ratcliffe was sentenced to five years in jail after being accused of spying, which she vehemently denies.

She was visiting the country with Gabriella when she was arrested.

Since then, husband Richard has been campaigning for the mum to be freed.

In a letter smuggled out of jail recently, Mrs Zaghari-Ratcliffe wrote: “I have no hope or motivation after my baby goes.

“There is no measure to my pain. In the near future, my baby will leave me to go to her father and start school in the UK.

“It will be a daunting trip for her travelling and me left behind.”