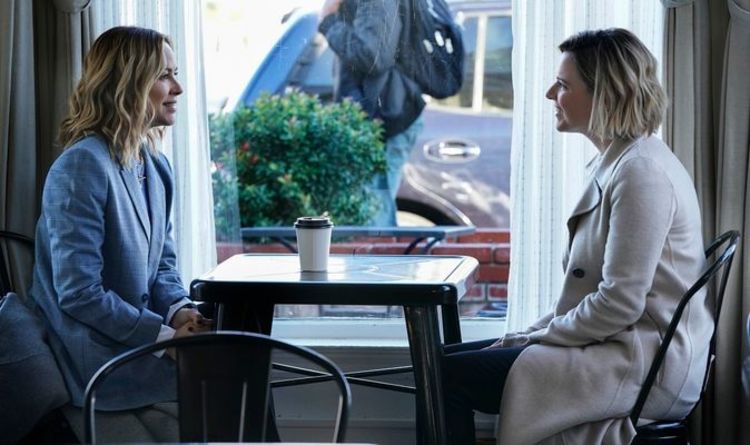 Season 17 of NCIS introduced a shocking element to Jaqueline Sloane’s (played by Maria Bello) history when it was revealed she gave up her biological daughter for adoption. Now Faith Tolliver (Kate Hamilton) has made a return to the CBS series to make a surprising request.

Due to the coronavirus outbreak, it was sadly announced that fans wouldn’t be able to watch the final four episodes of NCIS’ current instalment over their intended broadcast schedule.

Thankfully, it became clear during the 18th episode, Schooled, that the ongoing season still has plenty of surprises in store.

During the episode, the Naval Crimes team investigates the murder of a Navy technician when their body is found floating near a popular community event.

Meanwhile, Faith returns to Sloane’s life to find out more about her parentage.

More specifically, Faith wants to know who her father is, before revealing to her mother that she’s trying to have a baby.

Even the most longtime fans of the series were caught off guard by this touching moment between newly reunited mother and daughter.

Faith was introduced earlier in the season, in eighth episode Musical Chairs, when she asks Sloane to fill out some medical forms.

In this episode, her motives were finally revealed, and fans were able to witness the emotionally overwhelming reunion between Faith and her estranged mother.

Another tweeted in agreement: “Aww. What a fabulous ending. I love Jack & Faith together.”

Despite covering some tricky ground in the episode, most fans believed the writers played it just right as Sloane was able to overcome her trauma and reconnect with her daughter.

Faith was able to detect the hidden truth in Sloane’s story, and eventually thanked her mother for giving her up and allowing her to have a life of her own.

One fan commented on the multiple layers of tragedy in Sloane’s background and tweeted: “Yo, so not only has Jack been kidnapped, tortured, forced to watch her friends die, but she’s a rape victim too? y’all, I—… I gotta go get some water. Distewmuch.”