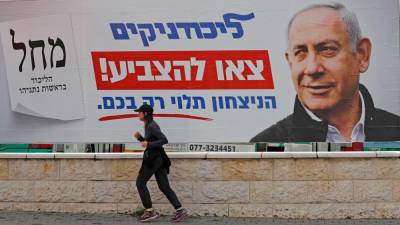 JERUSALEM: Israeli Prime Minister Benjamin Netanyahu pledged Sunday to annex key parts of the occupied West Bank within “weeks” if re-elected, as he sought to sway voters a day before the country’s third election in a year.

All parties have raised concern about voter apathy amid the grinding political stalemate, putting added emphasis on turnout.

Netanyahu, Israel’s longest serving premier, has been accused before previous elections of making last-minute plays to energise his right-wing base.

In an interview with Israeli public radio, he said annexation of the strategically crucial Jordan Valley and other parts of the West Bank was his top priority among “four major immediate missions”.

“That will happen within weeks, two months at the most, I hope,“ he said in the interview aired 24 hours before polls were scheduled to open.

US President Donald Trump’s widely-criticised Middle East peace plan, unveiled in late January, gave the Jewish state a green light to annex the Jordan Valley and proposed a committee to set out the exact borders of the territory in question.

Lieberman, who heads the nationalist Yisrael Beiteinu party and may again be in the position of kingmaker following Monday’s vote, said he had “ironclad information” that Netanyahu’s comments on the Jordan Valley were at least partly insincere.

“A few days ago, it became clear to me that he sent a message to (Jordan’s) King Abdullah, (saying) ‘Don’t worry, its just elections, there will be no annexation of the Jordan Valley’,“ Lieberman said in a TV interview.

Many experts agree that a unilateral move by Israel to annex the strategically important valley would inflame regional tensions and damage ties with neighbouring Jordan, one of only two Arab countries that has agreed a peace deal with Israel.

Netanyahu listed his other priorities as signing an “historic” defence treaty with the United States, Israel’s key ally, and “eradicating the Iranian threat”, without elaborating.

He has repeatedly pledged to stop the Islamic republic from developing a nuclear weapon and has not ruled out the use of force.

Netanyahu said that his fourth “immediate” goal if re-elected – despite facing trial on multiple corruption charges – would be major economic reform to bring down Israel’s high cost of living.

In November, the 70-year-old, who has spent 14 years as prime minister, became the only head of government in Israel’s history to be indicted in office.

He is charged with corruption, embezzlement and breach of trust. His trial opens on March 17.

After inconclusive elections in April and September, final opinion polls forecast Likud and Blue and White winning 33 seats each in the 120-member Knesset (parliament).

Even counting their respective allies – the right and Jewish Orthodox parties for Netanyahu and the centre-left for Gantz – neither side is expected to secure 61 seats necessary to form a viable coalition.

Those results would be identical to previous rounds, after which both leaders tried, and failed, to form a government.

Analysts say that after trudging to the ballot boxes twice in under 12 months, few Israeli voters remain undecided.

That has forced candidates to put added energy into bolstering turnout.

“I am encouraging citizens to get out and vote,“ Gantz told public radio Sunday.