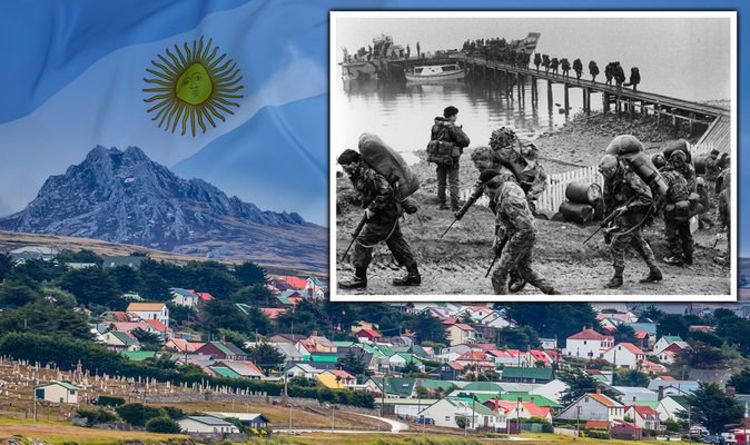 Gavin Short, news editor of Falklands Radio, came within a whisker of being shot dead during the Argentinian occupation of the islands and is still haunted by the memories. The 57-year-old has lived on the archipelago’s main island his entire life, and was a teenager when Argentinian forces launched an invasion on April 2, 1982, with an amphibious landing known as Operation Rosario. In response, UK Prime Minister Margaret Thatcher ordered the Royal Navy to send a task force to the region to reclaim the islands.

A short but bloody war ensued, in which almost 1,000 servicemen were killed, two-thirds of them Argentinian, with the hostilities shocking the world.

Eventually, after Prime Minister Margaret Thatcher despatched a task force the Falklands were liberated, on June 14, and life returned more or less to normal, punctuated by the occasional diplomatic spat – albeit, as Mr Short acknowledged, islanders are now rather more apprehensive in the wake the election of Mr Fernandez.

However, he pointed out the conflict did not tell the whole story, with comparatively little is known about what it was like during that difficult 10-week period.

He told Express.co.uk: “I was here in 1982, I was with the Falkland Islands Defence Force on the night of the invasion so my war didn’t last that long.

“What was it like during those long , dark, horrible days of occupation?

“I have often said to folk that before we lost it, I would have been hard pressed to describe what “liberty” was but by golly you knew what it was when it was taken away from you. It was a horrible experience.

JUST IN: Boris takes no deal off the table in snub to Farage

He added: “I could see my chances of getting my hands on my pension receding at high speed. I really thought that ‘this was it’.”

Perhaps unsurprisingly, Mr Short said, relatively little was said by islanders about their experiences in the years following liberation.

He added: “It is interesting that it is only in recent years that Falkland Islanders have started talking about 1982.

“Before then it was something that we sort of kept bottled up.

“The stories that are now emerging are showing that there was more mistreatment of the civilian population than even I had realised and I was here at the time.

“I and other suffered from what is now known as PTSD and some have got over it, some haven’t and there are still, even now, folk out there that hit the wall even after all these years.

“I feel sorry for the troops who liberated us as to be honest we probably didn’t show the happiness that might have been expected.

“It wasn’t that we didn’t want to see them, I think it was that we were all fairly traumatised by the events of those 74 days and were slightly spaced out by what had happened.”

Mr Short, whose ancestors have lived on the Falklands since 1849, added: “I have started harvesting memories from people who will talk to me and as I say, the mistreatment of the civilian population was much higher than I had realised.

“I will never forget nor will I forgive what was done to us.”