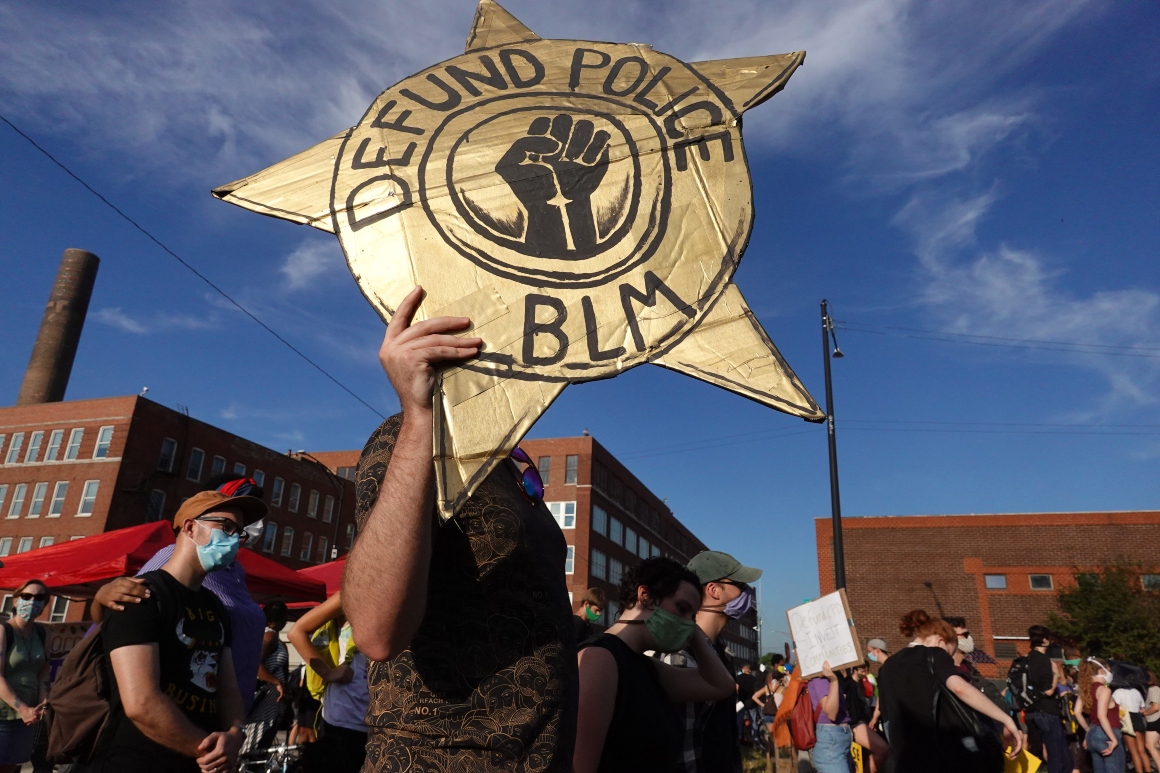 “Our end goal is to have an intervention on the funneling of private money into police forces and into policing,” said Scott Roberts, senior director of criminal justice campaigns at Color of Change. “If the police foundations existed to raise money for the families of fallen police officers, we wouldn’t say we need to abolish police foundations. It’s the specific type of work that they’re doing that we object to.”

Some corporations are beginning to reconsider the support. Wells Fargo says it has paused donations, while other companies including Goldman Sachs have agreed to hold discussions with activists.

The conflict underscores the perils of corporations taking public stands on social issues. Many of the companies have also pledged this year to fight racial inequality following the killing of George Floyd by Minneapolis police in May, which sparked demonstrations nationwide and a movement to “Defund the Police.” But they also have deep ties to law enforcement. Police foundations say much of the work they are doing is aimed at supporting their communities rather than equipping local police.

“When you come out on one side of social justice and cultural issues you risk alienating probably a third to half of the population, something no big business wants to do,” said Capital Alpha Partners Director Ian Katz, who tracks financial policy and politics. “It’s a reflection of the fact that so many issues have become political and partisan. There are no easy answers for banks here.”

The companies facing heat from advocates have long records of supporting police foundations across the country, according to a report from the watchdog group LittleSis, public filings and information available on the foundation websites.

Wells Fargo and Bank of America are among the recent financial supporters of the Atlanta Police Foundation, and a local Wells Fargo executive serves on its board of trustees. The foundation has attracted scrutiny for its role maintaining cameras that are part of a city-wide surveillance system for Atlanta known as “Operation Shield.” Watchdogs are also focusing on the Los Angeles Police Foundation for its role in helping fund surveillance systems.

The New Orleans Police & Justice Foundation today lists JPMorgan as a “corporate partner of police” on its website, and a managing director at the bank serves as secretary and treasurer on the foundation’s board. Chevron said it contributed $ 1.27 million to first responder organizations last year, including $ 239,000 to police foundations.

Color of Change, Roberts said, escalated its work on the issue after the Atlanta Police Foundation paid $ 500 “bonuses” to officers after prosecutors filed murder charges against a former officer in the June 12 killing of Rayshard Brooks. The payments attracted attention because around the same time an unusual number of officers called in sick to work in what appeared to be a protest of the charges. The foundation said the payments were designed to show appreciation for officers deployed during the first weeks of social justice protests and were approved before the shooting.

In interviews and statements, representatives of several police foundations said critics were overlooking their community-focused efforts and argued that their mission was not focused on buying equipment for police departments.

Rob Baskin, a spokesperson for the Atlanta Police Foundation, said Color of Change “paints all police foundations with a broad brush” that fails to distinguish particular programs and goals.

The Atlanta foundation said its largest program is its “At-Promise” youth initiative that tries to divert youths who commit nonviolent crimes away from the criminal justice system using counseling, mentoring by police officers and tutoring. The bank SunTrust, now known as Truist following a merger, announced $ 3 million in grants last year to support the foundation’s diversion efforts.

Baskin said the Atlanta foundation’s programs are “not based on just writing a blank check to the police department” and that “we see no conflict whatsoever between good policing and social justice.”

Color of Change, which launched following Hurricane Katrina, has a long record of challenging corporate America for practices that it sees as perpetuating racism in the U.S.

“At a time when we’re having a long overdue debate around how we should be resourcing policing, what the scope of policing should be, police foundations serve as unaccountable backchannels that funnel resources to police departments,” Roberts said. “They fund some of the more controversial aspects of policing right now, including surveillance, more militarized equipment, increased police presence in Black communities — and all that is done outside of the oversight of the democratic process.”

Company representatives said the donations to police foundations are a fraction of bigger philanthropic efforts that fund numerous other causes, and that their contributions to the foundations often have a specific purpose.

Bank of America said this year it gave $ 7,500 for pandemic-related personal protective equipment to the Philadelphia Police Foundation, which lost some financial backers this year amid police brutality concerns and attracted controversy for replacing SWAT unit rifles used by the city’s police and funding a drone program. The bank said it gave the New York City Police Foundation $ 500,000 for coronavirus PPE as well. Before the outbreak, the bank had also donated to the Boston Police Foundation and the Los Angeles Police Foundation, according to its 2018 tax filing.

“Generally, our support for these foundations is directed toward promoting and improving relationships between police and the community,” Bank of America spokesperson Bill Halldin said. “That might be funding a pilot program that one of those entities puts forth to us for consideration.”

Color of Change has started reaching out to companies, and some have been willing to have conversations, Roberts said. The group plans to issue a report on corporate support for police foundations in the coming weeks. It has posted online petitions calling on corporations to divest from police foundations and refuse seats on their boards, calling out companies including Amazon, AT&T, Chevron and Target.

Some companies are reconsidering their support for the foundations.

Wells Fargo spokesperson Jennifer Dunn said the bank has paused giving to police foundations and other organizations as it evaluates their alignment with Wells’ new social impact strategy and immediate community needs.

Dunn cited the significant economic impact of Covid-19 on those most in need and said Wells Fargo’s primary philanthropic priorities are housing affordability, small business growth and financial health. Wells made a $ 50,000 contribution to the Atlanta Police Foundation last year to provide affordable housing for police officers so they could live in the neighborhoods they police, she said. In 2018, the bank’s foundation gave money to several police groups including those in San Diego and Charlottesville, Va., according to tax filings.

Goldman Sachs confirmed it’s in discussions with Color of Change. “We frequently review our giving to ensure it is targeted to causes we support,” spokesperson Andrew Williams said. The bank is a sponsor of the Salt Lake City Police Foundation.

Some foundation leaders tried to distance themselves from groups that have helped arm police.

“I don’t know if our board members would be part of the foundation if that was the case,” said J.R. Howa, chair of the Salt Lake City Police Foundation. “We’re not governed by the police department. We’re not governed by Salt Lake City. Our whole mission is to bridge the gap between the community and the police department and give back to the community as much as possible.”