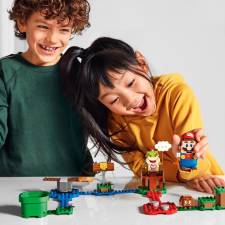 LEGO Super Mario represents something new for both Nintendo and Lego, though its hybrid nature overlaps with existing Nintendo products.

In Lego Super Mario, Nintendo’s dungareed mascot is no longer on the screen. Instead, the screen is on Mario.

Small built-in displays animate his expressions and show how players are progressing through physical Lego brick levels of their own creation.

A construction toy that combines the freestyle brick building of Lego with the coin-collecting, monster-squishing video game adventures of Nintendo mascot Mario, it’s to launch later in 2020.

Lego community site StoneWars, based in Germany, expected an initial run of 13 Lego sets to be sold for between €3.99 and €99.99.

The concept can be seen as a hybridization of two relatively recent Nintendo products: Super Mario Maker and Nintendo Amiibo figurines.

The Super Mario franchise finally accommodated years of unofficial, deviously challenging homages, as well as a trend for user-generated content mainstreamed by Minecraft.

While Minecraft already has an existing partnership with Lego, with a product line which debuted in 2012, Nintendo and Lego are differentiating Lego Super Mario through its game-style interactivity.

Nintendo has already involved itself in the toys-to-life genre, in which collectible figurines offer partial interaction with video game experiences.

It’s a genre which exploded in popularity in the early to mid 2010s, with Activision’s revitalized Skylanders franchise and Nintendo’s Amiibo line still in production, Lego Dimensions and Disney Infinity among other notable contributions to the format.

Nintendo iterated on the concept in 2018 with DIY cardboard assembly toy Nintendo Labo for the Nintendo Switch console.

Labo was commended for its value as an immersive educational product.

Here, with Lego Super Mario, Nintendo appears to have moved away from a direct video game application entirely, for the time being at least. – AFP