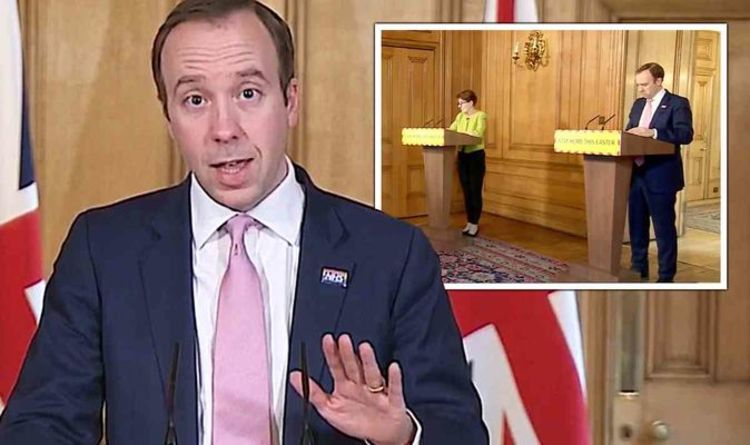 Mr Hancock said he wants to outline the next steps for tracing infections via an app, that will allow people to log their symptoms anonymously, data only to be used by NHS staff. Mr Hancock said: “Today I wanted to outline the next step: a new NHS app for contact tracing. “If you become unwell with the symptoms of coronavirus, you can securely tell this new NHS app and the app will then send an alert anonymously to other app users that you’ve been in significant contact with over the past few days, even before you had symptoms so that they know and can act accordingly.

“All data will be handled according to the highest ethical and security standards, and would only be used for NHS care and research, and we won’t hold it any longer than it’s needed.”

“And as part of our commitment to transparency, we’ll be publishing the source code, too.”

Matt Hancock was asked about the delivery of PPE to NHS frontline staff.

Mr Hancock says “we won’t rest” until everyone gets the necessary PPE delivered.

This news comes as the Department of Health and Social Care has updated the total number of deaths from Covid-19 of people in hospitals in the UK to 10,612, as of 5pm Saturday, a daily rise of 737.

On Saturday, there had been 9,875 hospital deaths recorded in the UK, with a day-on-day rise of 917.

While the daily increase of deaths has slowed, it is unclear how high the actual daily death toll is, as many deaths are being reported days or even weeks after they have occurred.

ByA decision on whether a vaccine is apt for rolling out could be made in the UK as soon as next week. In the priority...
Read more