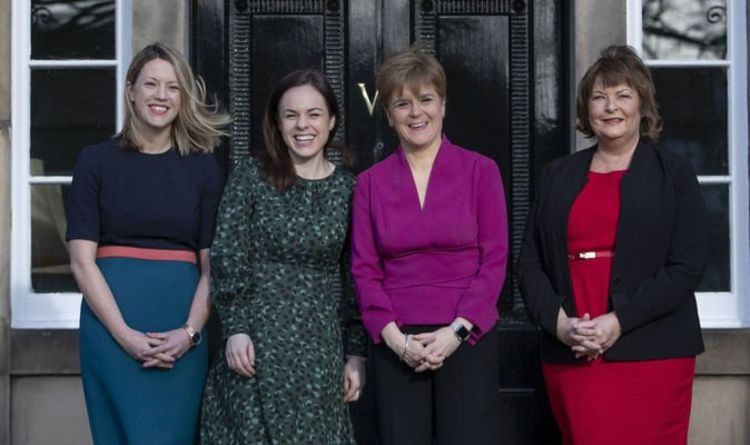 Scotland’s First Minister made an unexpected cabinet reshuffle earlier this week, appointing just a handful of new members. It comes as the SNP’s former Finance Secretary, Derek Mackay, resigned after it emerged he has sent “hundreds” of social media messages to a 16-year-old boy.

Many took to Twitter to mock Ms Sturgeon’s unfortunate set of circumstances, drawing attention to the fact that her cabinet has hardly changed.

One person wrote: “Nothing about forced reshuffle!”

Another person, in reference to the 2014 independence referendum, said: “Is this a “once in a generation” refreshed Scottish Cabinet??”

A third person quoted the SNP on their message of the appointment, and said: “’Continues to deliver progress for Scotland?’

“Are the SNP so ignorant of their failings in Government throughout Scotland institutions?”

The 29-year-old became the first woman to set out a budget at Holyrood or Westminster when she stepped in for Mr Mackay easier this month.

The reshuffle will also see Fiona Hyslop move within the cabinet and take on extra responsibility for the economy.

The appointments os Ms Forbes and Ms Gilruth will be confirmed in a vote by MSPs on Tuesday.

Ms Forbes has consistently been praised by SNP colleagues and opposition MSPs after stepping in for Mr Mackay.

Mr Macaky quit two weeks ago, on 5 February, after saying he had “behaved foolishly” by sending what turned out to be hundreds of messages on social media to a 16-year-old boy.

Police have since spoken to the teenager in question.

Last week, Police Scotland said that while it had not “received any complaint of criminality”, it was “assessing available information”.

Police have appealed to others to come forward with any information regarding the incident.

The news followed claims published in The Scottish Sun that Mr Mackay sent 270 message to the boy over a six-month period on Instagram and Facebook.

The youngster has since told the paper: “I was happy to speak to the police and will tell them everything that happened.

ByThe UK government is committed to ensuring the right levels of intervention in the right places to manage Coronavirus outbreaks. The approach has been simplified...
Read more