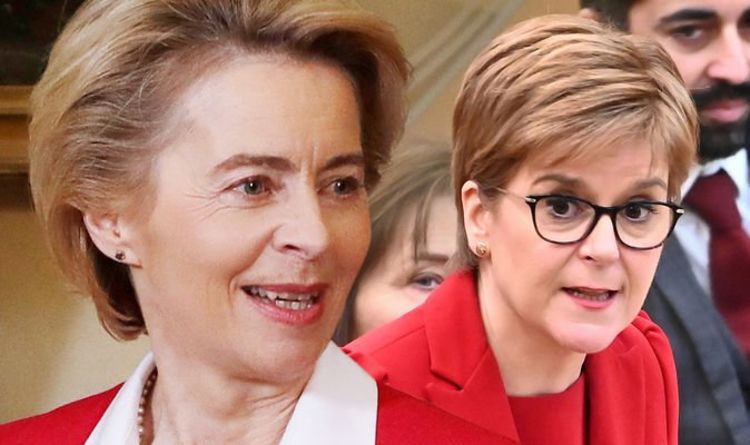 Scotland’s First Minister Ms Sturgeon has been pushing for ‘Indyref2’ ever since the 2016 EU referendum, despite promising the first public vote in 2014 was a “once-in-a-generation” opportunity. Mr Sillars was once part of the deputy leader of the same party Ms Sturgeon leads, the Scottish National Party (SNP). He was also the architect of the slogan which still drives the SNP today, ‘Independence in Europe’, but now believes it would be a great mistake for an independent Scotland to join the bloc.

Examining how the EU has shockingly misused its power in recent years, Mr Sillars revealed how the bloc has even resorted to “back-room coups” in order to control smaller member states.

Writing in his 2015 book ‘In Place of Failure’, the dissident SNP member explained: “Great power has transferred to those central organs of the EU, which are essentially undemocratic.”

He continued: “The EU lacks the political and cultural homogeneity to produce pan-european parties that genuinely span its whole territory and with which citizens in all states can identify.”

According to Mr Sillars, this “great central power does not lie dormant”. Since the 2009 Eurozone crisis, the EU has used its powers to “unseat democratically elected governments” in both Greece and Italy, and replace them “unelected technocrats”.

As both nations suffered economically during the financial crash, there is a fear it could happen with Scotland too if it were to join the bloc as the country’s deficit is currently the highest in Europe.

The deficit sat at an astonishing £9.4billion in August last year and was seven times higher than the UK as a whole in 2018 – such an economic dilemma poses a serious obstacle to Scotland’s path to becoming a member state.

In a Daily Telegraph article from June 2015, international business editor Ambrose Evans-Pritchard explained how the EU overcame financial issues of Greece and Italy.

He wrote: “Guardians of financial stability are deliberately provoking a bank run.”

READ MORE: How Tony Blair admitted he ‘make a mistake’ with Scottish devolution

Mr Evans-Pritchard pointed out that the Bank of Greece claimed not meeting creditor demands would “most likely” mean Greece’s ejected from the EU. He explained this “is tantamount to a threat by the ECB to throw the Greeks out of the EU if they resist”.

Mr Sillars quoted Mr Evans-Pritchard and pointed out how the EU was executing a “back-room coup d’etat” having sent in its vice president to replace the then Greek prime minister.

The former SNP deputy added that this happened with the Greek prime minister “had the temerity to suggest a referendum on the austerity measure it wanted to impose”.