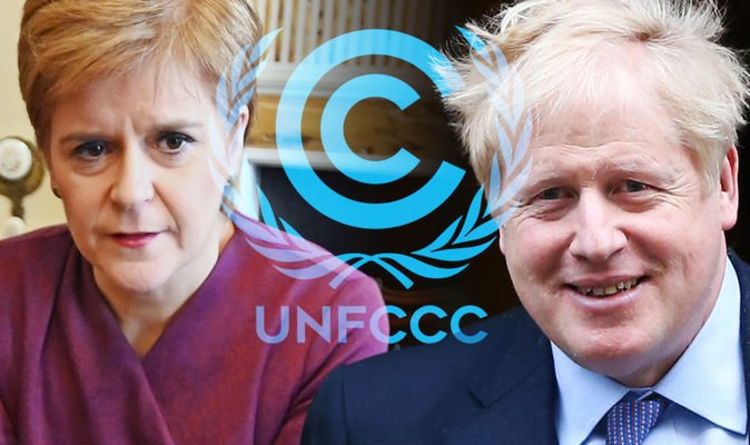 In a bolshie move, Boris Johnson is understood to have refused to give First Minister Nicola Sturgeon an official role in the COP26 conference, which is due to take place in her own home city of Glasgow. Mr Johnson’s snub has now triggered an extraordinary stand-off between the pair, already at loggerheads over Brexit and Ms Sturgeon’s desperate bid for Scottish independence.

Claire O’Neil, former COP26 event coordinator, told the BBC Radio 4’s Today Programme: “I did suggest that we give Nicola Sturgeon a job and she was involved in this, which the PM heartily and saltily rebutted.”

The claim comes after Mr Johnson is understood to have told a Tory conference he doesn’t want Ms Sturgeon “anywhere near” the climate conference in Glasgow, due to take place in November.

But Ms Sturgeon hit back by making clear she still plans to attend the Glasgow summit despite Mr Johnson’s snub.

She said: “I fully intend to be in Glasgow, my home city, and to play my part in making it a success for Scotland, the UK and the world.

“We must all be serious about our responsibilities.”

She also tweeted: “To be clear – @scotgov wants #COP26 to be a success & will play our full part in making it so.

The First Minister said: “To support the UK’s collective effort to both deliver a successful COP and to ensure Scotland and the UK can demonstrate leadership by placing ourselves on track to deliver out respective targets of net zero by 2045 and 2050, I am writing to propose that Scotland’s Cabinet Secretary for the Environment and Climate Change, who also chairs the Scottish Government’s delivery group in relation to COP26, attends the Cabinet meetings on climate change which you have committed to chair.

“I believe this would not only help with co-ordination, ensuring any issues can be aired early and properly dealt with, but would also demonstrate our joint commitment to and responsibility for delivering an event that is not only safe and secure but that lives up to the expectations of the world.”

Meanwhile, Ms O’Neil, former climate and energy minister who was sacked as the president of the COP26 summit last week, also launched a scathing attack on the Scottish Government for behaving “disgracefully”.

She said: “One of the things you would have hoped to have organised by now is an absolutely firm location.

“I have not been party to the numbers and negotiations, but I am told by those involved that the original analysis was hundreds of millions of pounds off track, that the Scottish Government has absolutely behaved disgracefully and has been contracting buildings on the COP site that should be made available to the conference, and that there has been a complete standoff.

“I did suggest we give Sturgeon a job which the Prime Minister heartedly and saltily rebutted.

“We have to stop the playground politics.”