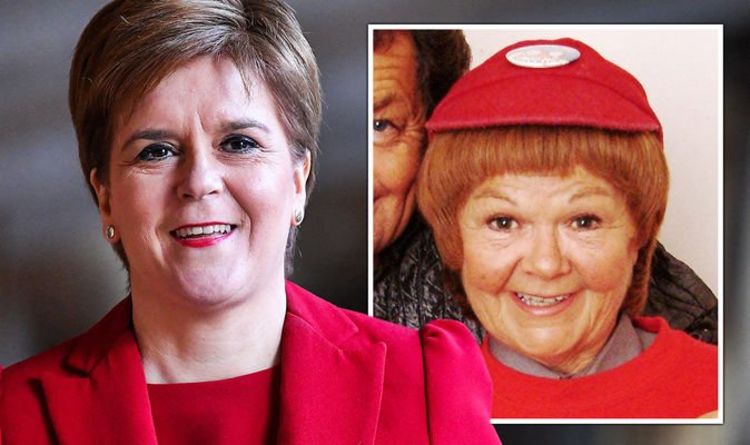 The Prime Minister allegedly made the comment after it was suggested Ms Sturgeon was given an official role in the COP26 conference due to take place in Glasgow. According to The Sun, the event’s former coordinator Claire O’Neill made the suggestion, but Mr Johnson replied: “Over my f****** body. I’m not being driven out of Scotland by that bloody Wee Jimmy Krankie woman.”

The comment, denied by Mr Johnson’s spokesman, is apparently a reference to the Eighties Scottish comedy act, The Krankies, in which Janette Tough played a schoolboy called Jimmy.

Ms Sturgeon declared that she had not heard of the nickname before but said that the alleged remark is “meant as a term of abuse”.

However, in June 2017, the SNP leader confirmed in an interview with restaurant critic Tam Cowan during Scott the Ballots General Election special, that she was aware of the nickname.

She even said that she liked the character and acknowledged that most people are just having fun.

Mr Cowan asked: “How annoyed do you get with the Jimmy Krankie lookalike stuff?”

“I think most people just use it as a bit of fun, but some on social media get really nasty with it.”

According to The Scottish Sun, Ms Sturgeon has been compared to the character for years.

She smiled and said: “She hadn’t seen it. In fact, she was blissfully unaware of it, but I happened to be at my sister’s, where we showed it to her and to be honest she was a wee bit upset.

“She then spent the rest of the evening asking, ‘I don’t look like Elton John, do I?”

Mr Cowan responded: “Do these people not realise you’re an Ayrshire lassie?

“They may just get a chap at the door.”

Despite the laughs in 2017, Ms Sturgeon, now has a stern approach to the jokes.

The SNP veteran, who is pushing for a second Scottish independence referendum, recalled in the Sunday Times magazine yesterday that she had faced criticism for not being “feminine enough” when she used to try and fit in by dressing like her male colleagues.

She praised the Me Too movement, saying it has given women a chance to “reassess” behaviour they once would have to “put up with”.

ByThe EU and UK will embark on an intensified final phase of Brexit talks today after Britain agreed to lift its block on negotiations....
Read more

ByKanye West and Amber Rose, pictured at the 2009 BET Awards, are not friendly exes — and she says that's on him. (Photo: REUTERS/Phil...
Read more