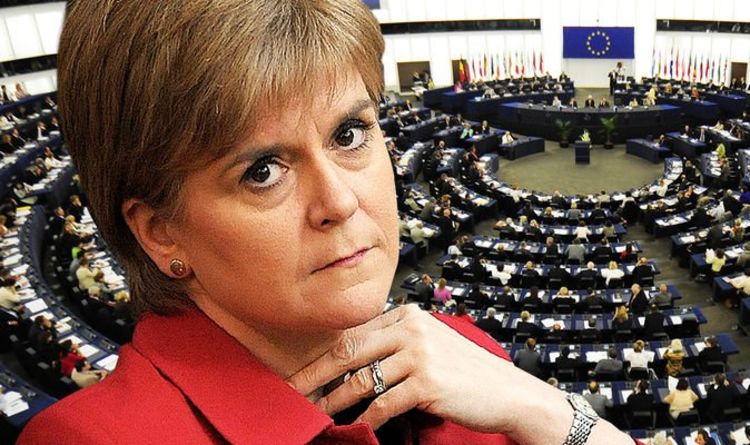 Ms Sturgeon, Scottish First Minister and Scottish National Party leader, has taken her party’s success in the December election as a mandate for a second independence referendum. As the most pro-EU party within the UK, the SNP has been prominently anti-Brexit since the EU referendum. Although 62 percent of Scots voted to Remain in the EU, the UK will still be leaving the bloc leading Ms Sturgeon to suggest the UK no longer represents Scotland’s wishes.

Yet, in the unlikely circumstances that Ms Sturgeon is granted a second referendum and her Leave campaign wins, another question marks hangs over whether the country would even be able to join the EU as an independent state.

New members can only be allowed into the bloc through a unanimous vote from the existing member states and Scotland would undoubtedly ruffle feathers if it were to join.

Spain is struggling with secession demands itself, from Catalonia, so is unlikely to support a newly independent state. Scotland could also be rejected due to its current deficit of 7 percent of GDP, unless it adopted a strict austerity programme from the EU as well as the euro.

Writing in his 2015 book, ‘In Place of Failure’, Brexiteer and former SNP deputy leader, Mr Sillars explained: “How could the EU Commission solve the problem it doesn’t want to face – perhaps initiating treaty changes and thereby opening up a can of worms – were it to rely on the vote of every one of 28 states to make Scotland a full member?”

With these problems in mind, Mr Sillars – a regularly dissident voice within the SNP – explained how the Scottish Government had thought of an alternative way to get into the bloc.

In the 2013 document, ‘Scotland in the European Union’, Holyrood points how the treaty could be amended.

As Mr Sillars summarised it: “Article 48 of Lisbon which provides for treaty amendment through ‘ordinary revised procedure’ as the way in which we should we shall be admitted.”

He added it would “extremely difficult, if not impossible” for Scotland to join.

Yet, Ms Sturgeon still appears to be believe that re-joining the EU as an independent nation would be a “relatively quickly” process.

During a BBC interview with Andrew Neil in the run-up to the December election last year, she was asked why she thought it would be so fast.

She said: “I’m not going to give you a specific timescale for that.

“In all of my experience of discussions with different interests in the European Union I think that could be relatively quick but that will depend on the discussion we have.

ByA schoolboy had his grandparents smiling with his reaction to them winning £30,000 on People's Postcode Lottery. Lucky Susan Spearman, 68, was one of eight...
Read more
U.K.

ByThe cyclist was taken to hospital with an injured left arm. Sir Keir, 58, exchanged insurance details with the cyclist before heading away from the...
Read more
U.K.

Covid: More than 50 Tory MPs call for 'roadmap' out of lockdown

BySome 40 Conservative MPs representing areas in the north of England, North Wales and the Scottish borders, have publicly signed the letter, including former...
Read more