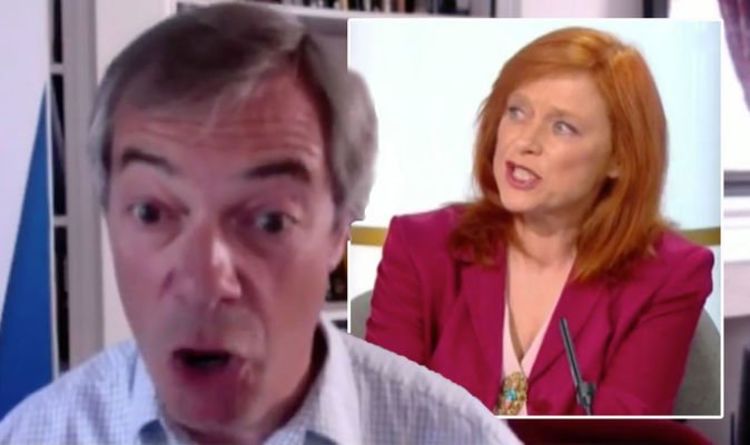 The former Brexit Party leader was quizzed by Jeremy following the news he had been questioned by police after he’d shared videos of him reporting from Dover online despite the ongoing coronavirus pandemic. However, Nigel claimed it was all a “waste of police time” and he was left feeling “very angry” by the situation. Therefore, the topic of “lockdown rulebreakers” was the centre of conversation on the Channel 5 show and it didn’t take long for attention to be turned towards those flying into the country.

Jeremy’s guest Dr Sarah Jarvis was quick to quiz Nigel on whether it was “appropriate” to bring up the topic of border control amid the ongoing pandemic.

Nigel kicked off the debate by stating: “There were two people taken into Dover a fortnight ago who’d come across on one of those small dingies who displayed clear, open symptoms of coronavirus -“

Before he could continue, the GP stepped in and asked: “Is this an appropriate thing to be covering at a time where people of BAME origin are 50 percent more likely than the rest of the population to be putting their lives on the line by working for the NHS?”

“Saving the lives of people, and are probably even more over-represented in terms of our other essential workers?”

Nigel hit back: “As we know, many thousands of people have died unnecessarily in this country because we have been the laxest in the world when it comes to border control.”

As he attempted to get the rest of his answer out, Sarah interjected: “That’s not what I asked.”

Nigel continued: “Now, those coming in through Heathrow and airports like that,

“Of course in sheer numbers, dwarf those at coming in from Dover, Hastings and elsewhere.”

The former MEP added: “We had a situation where people coming from camps, illegally, clearly displaying signs of COVID-19.

“We had a border force who, at the time, had no PPE.

“We had immigration services who were much the same,

“So no, I think this is very relevant indeed,” Nigel concluded.