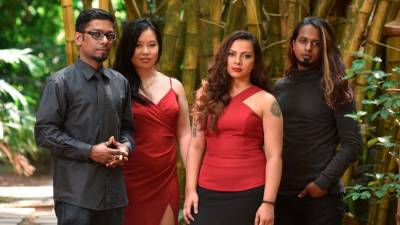 LIKE many other bands, the Covid-19 pandemic has thrown alternative rock band Skies Are Red’s plans into limbo, but the band members remain resolute in coming out the other end stronger than before.

Founded in 2011, Skies Are Red was formed by vocalist Danielle and guitarist Dervin, which they decided to grow and develop while continuing to hone their own unique sound and music.

In a recent interview with theSun, Danielle said: “Our lineup has changed a lot throughout the years. We’ve had a number of drummers and bass players come and go.

“While Dervin and I were fixated on our plan to write, perform, and record original music, we’ve had members who were more interested in playing cover songs in pubs and bars. It’s just something that we weren’t really interested in doing at the time.”

Eventually the band came into contact with current bassist Chloe and drummer Malcolm.

“We wrote more songs and played numerous shows, including mini tours in the Klang Valley, Penang, and Sabah. Malcolm left the band in October last year to pursue his career and studies, and we’re in the midst of selecting a new drummer,” Dervin explained.

Commonly linked to alternative rock, the band developed their own unique sound by blending the different styles of music which each individual member grew up listening to.

“We’ve developed a sound that is a mixture of rock, with some R&B and a pinch of ballad-style vocals. And when we feel like it, we’ll go all heavy,” said Chloe.

Dervin pointed out that listeners have said Skies Are Red sounds like Evanescence, Paramore, Nightwish and glam rock, but ultimately, the music varies in sound and complexity.

The band’s live presence is just as spread out, as Dervin points out that they have played underground gigs, sessions at speakeasy bars, indie shows, and larger events such as MMM Hari Malaysia at Dataran Merdeka in September last year, but also have no qualms about performing at weddings and annual dinners.

Everything has led to the band’s recent single Wounds, which is part of an upcoming EP.

“I wrote the lyrics for Wounds when I was going through some troubled times. The song highlights the many emotional battles one may experience in a lifetime, and how perseverance and strength can overcome the darkest times,” said Danielle.

Recorded and produced by Ashwin Gobinath of Nadir Studios, Dervin claims that it was among the band’s hardest songs to record, because of the emotional aspects of the song, and the way it’s composed and arranged, though they are glad of how it turned out.

“Wounds, like all our songs, has a strong message that we hope would touch people and inspire them to persist during hard times. When people tell us that they’ve found a connection with our music, we feel we’ve done our part and we’re inspired to do more,” he said.

According to Dervin, the aforementioned EP and its launch, as well as the selection of a new drummer following Malcolm’s departure, were all planned just before the movement control order (MCO) began, and they hope that now that restrictions have eased, they will be able to get back to making music in the near future.

“During the MCO, we did some live stream gigs which, unfortunately, I could not join as we were staying in separate locations,” said Chloe. Not being able to play on stage or even in the jamming studio was really frustrating.

“However, we did call each other once in a while to make sure that everyone is still alive and well. We managed to plan the release of Wounds, which you can now find on your preferred music streaming platforms. We’re thankful that technology could still bring us together and still make our music significant at this point in time.”

Wounds is available on streaming platforms, with the band planning to release another single in the next couple of months, along with a possible music video for their latest single.

By Samuel Tolbert @androidcentralCyberpunk 2077 is getting a full next-generation upgrade sometime in 2021 which will bring some extra improvements for players to enjoy but...
Read more

ByHigh blood pressure can seem lower down on the totem pole of health priorities because it does not produce any major symptoms. It is therefore tempting...
Read more