“Ninja Battles” Fortnite tournament announced with $480,000 up for grabs 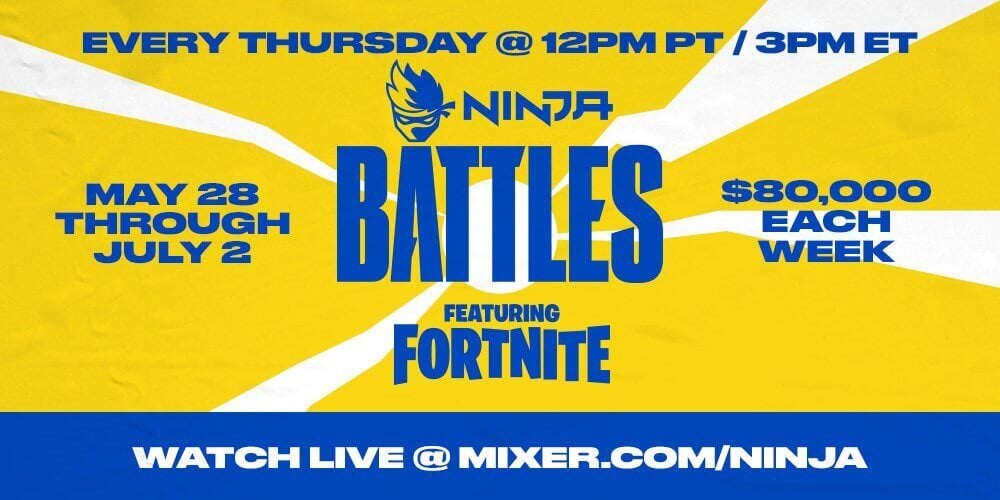 While the recent season of competitive Fortnite has reached an end, it’s not too far-fetched to worry about how long it will take for the next season to ramp up. Between Chapter 2 Season 1 and Season 2, the competitive community endured three grueling months without an event

This time, Epic took the hint and is now sponsoring third party events between FNCS seasons. Earlier today, Benjyfishy hosted a $ 10,000 “Benjyfishy Cup” where Th0mas, Mongraal, and Passivq divvied up the prizes. Shortly after the conclusion of the Benjyfishy Cup, Ninja had a surprise announcement of his own

Similar to Benjyfishy, Ninja is going to host a tournament on his own turf. But there are also some spark differences between both events, so let’s break down all the details

Starting on May 28th at 3PM (Eastern Time), Ninja Battles will take place every Thursday until July 2nd. Each week is separate for all 6 weeks meaning the leaderboards are not cumulative

Keep in mind, this is an NA-East event with one custom lobby filled with invited trios

While there isn’t an itinerary listing all of the competing players, invited players are already making announcements as to who they are trioing with

Some “OG” Fortnite pros are also getting a chance to show that experience can win out in a high stakes event. Vanguard player Jaomock is teaming up with JDW and Snirot tomorrow. Some other confirmed players include: SypherPK, Bini, Hogman, Edgey, Riversan, Cented, Clix, BrookeAB, Furious, Chap, Av, and Scoped

Ninja will be competing with Vivid and Colazo – two starkly different players. Vivid has been a titan of the Fortnite community and has remained relevant between multiple years worth of tournaments. While on the other hand, Colazo gained notoriety for his skills on da’ sticks more recently

We expect Ninja to release more details on the tournament format and will update accordingly. Follow us on Twitter to never miss a thing!