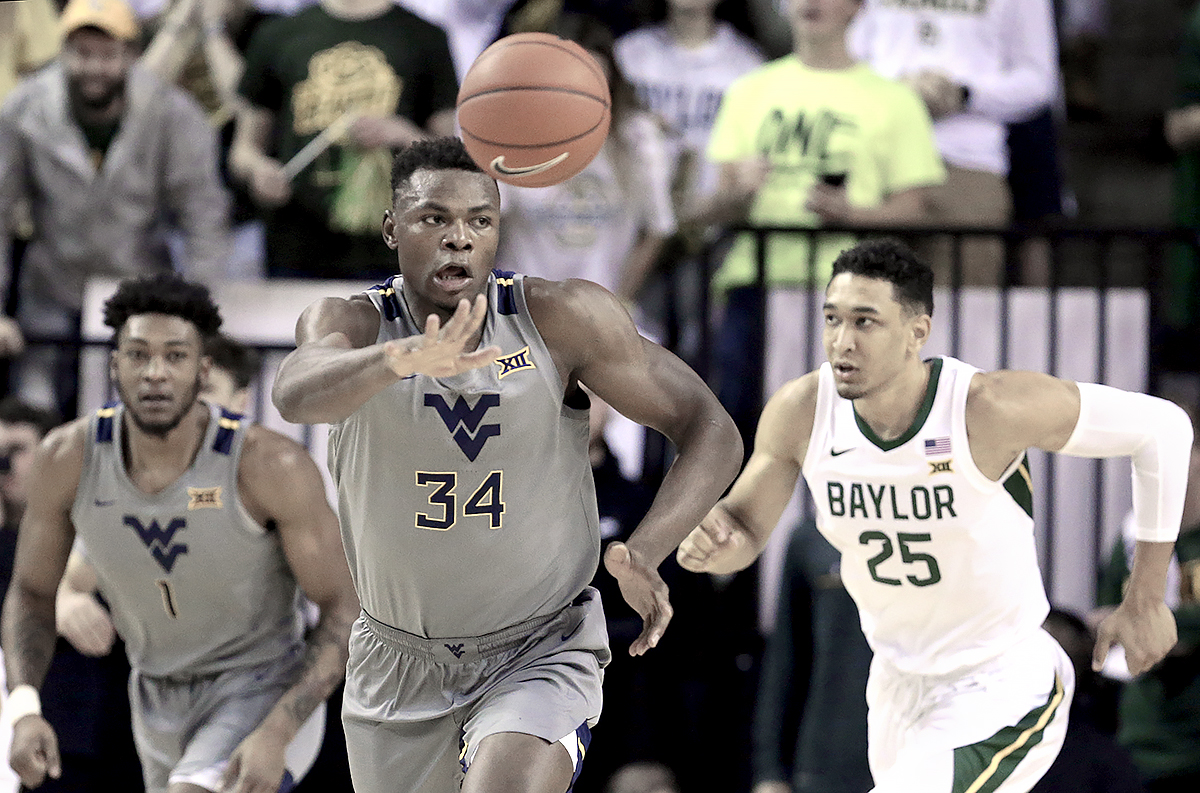 WACO, Texas — Jared Butler said he wasn’t trying to make up for the absence of Baylor’s second-leading scorer behind him as the top-ranked Bears chased the Big 12 record for consecutive wins.

Maybe it just seemed that way when the junior guard connected on a 3-pointer just 21 seconds in and hit three more from long range before halftime.

Butler scored 16 of his 21 points in the first half, and Baylor never trailed while matching Kansas for the longest winning streak in the Big 12 at 22 games with a 70-59 victory over No. 14 West Virginia on Saturday.

The Bears (23-1, 12-0 Big 12) cruised without MaCio Teague, a junior whose streak of 90 consecutive games ended because of a right wrist injury. Butler and Teague are the only two Baylor players averaging in double figures.

“I told myself that I can’t change my game,” said Butler, who was 8 of 11 overall and 5 of 7 from long range. “I can’t try to force shots now that he’s not playing. I didn’t try to change my game, but luckily it just worked out that way.”

Baylor led by 19 in the first half and answered a scoreless stretch of nearly four minutes before halftime by starting the second half on a 20-3 run for its biggest lead at 53-25.

“We have this incredible fascination for dribbling the ball,” coach Bob Huggins said. “I haven’t seen a game yet where you get points for that. You’re not going to win turning it over 22 times.”

Matthew Mayer had a flying dunk off a nifty spin move on the baseline and finished with 13 points and eight rebounds for the Bears, who matched Kansas’ record run in the Big 12. The Jayhawks started 22-0 in 1996-97, the league’s first season.

Davion Mitchell scored 13 points with a game-high nine assists — two more than West Virginia had as a team — as Baylor extended the longest winning streak in school history. The Bears won their 12th consecutive conference game, topping the 1945-46 team’s mark from the old Southwest Conference.

“I think it’s a tribute to the players, their belief,” coach Scott Drew said. “And we’ve been operating under joy … focusing one game at a time and we’ll keep doing that.”

The Mountaineers were coming off a 58-49 loss to No. 3 Kansas when they led by seven midway through the second half. West Virginia, which got 11 points and 12 rebounds from freshman Oscar Tshiebwe, hadn’t lost consecutive games this season before the current skid.

West Virginia: An 8-0 run to finish the first half gave the Mountaineers a sliver of hope, but they missed their first 11 shots after halftime to ruin any chance of getting back in the game. When they finally started making shots, the Mountaineers were down 28 points with 10 minutes to go.

Baylor: The Bears have a nation-leading six wins without a loss against Top 25 opponents. Their four-week run atop the poll is the longest for a Texas school since Houston over the final eight weeks in 1968. It’s sure to reach five weeks after a blowout of the team that beat Baylor a day after it reached No. 1 for the first time in January 2017.

The Jayhawks won 87-70 at Oklahoma, which should set up a 1 vs. 3 showdown in Waco next Saturday. Before then, the Bears visit the Sooners while Kansas is home against Iowa State. No. 2 Gonzaga plays at Pepperdine on Sunday in the only other game that could change the current rankings.

“First and foremost, we’ll concentrate on our next game,” Drew said. “But when the weekend comes, I don’t know if there’s a better honor out there for a university than to have college game day for football and basketball in the same year.”

The ESPN show visited Waco when the Sooners played the surprising Bears for the Big 12 lead in football in November.

Derek Culver, second to Tshiebwe in scoring and rebounding, had just three points while attempting just four shots and finished with three rebounds without one on the offensive glass.

Baylor: At Oklahoma on Tuesday.