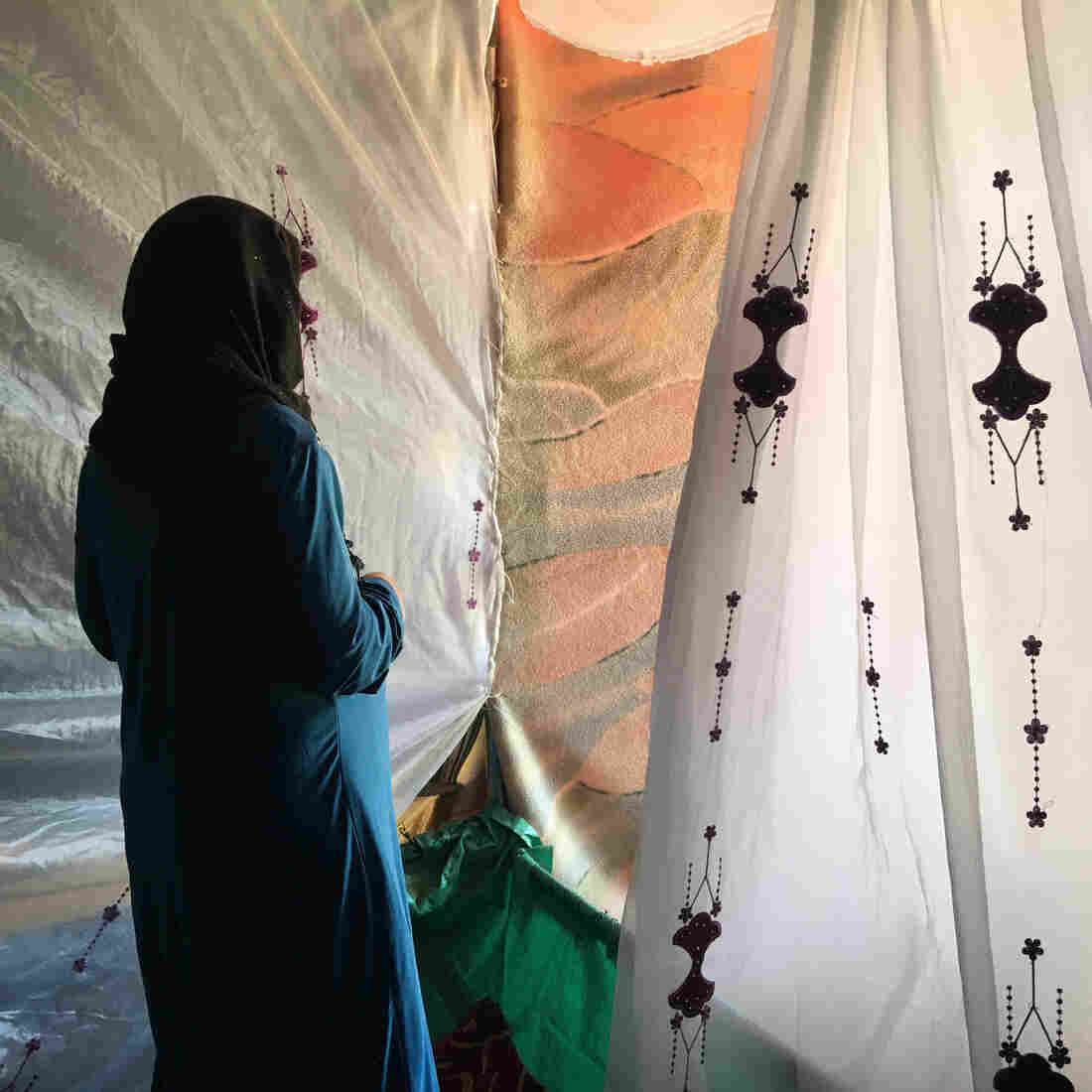 Ftaim al-Saleh stands in the tent donated by friends and relatives after her four youngest children died when their tent caught fire, as she and her husband were working in the fields. The Syrian refugee couple came to Jordan eight years ago, after airstrikes destroyed their house. Jane Arraf/NPR hide caption

Ftaim al-Saleh’s young nieces and nephews play in the dirt near her family’s new tent on the road to Amman’s international airport. Her own youngest children are buried up the road — four of them laid out in graves on a small, rocky hilltop cemetery overlooking the highway.

The children died in a fire early one morning in June, while she and her husband were in the fields where they work as farm laborers.

Saleh, 35, and her husband are among the thousands of Syrian refugees the International Labor Organization says make up about 70% of Jordan’s farm workers — planting and picking vegetables and the strawberries that have recently become popular among middle-class Jordanians.

The strawberry fields where the Salehs worked on the day their children died are on the outskirts of Amman. Thousands of shoppers come and go to the giant Ikea store overlooking the fields. But unlike the Syrian refugees in Jordan’s sprawling camps or crowded into impoverished urban neighborhoods, refugee farm workers are mostly unseen.

The U.N. Refugee Agency says it doesn’t have figures for how many Syrian refugees like the Salehs live in what aid organizations call “informal tent settlements” in Jordan. There are roughly 800,000 registered Syrian refugees in Jordan.

The Saleh family came to Jordan with their three eldest children eight years ago. They arrived from the Syrian countryside, where they owned their own land, growing potatoes, onions, cucumbers and wheat. When airstrikes destroyed their home in a village near Hamma, they crossed into Jordan for safety along with uncles, aunts and cousins. 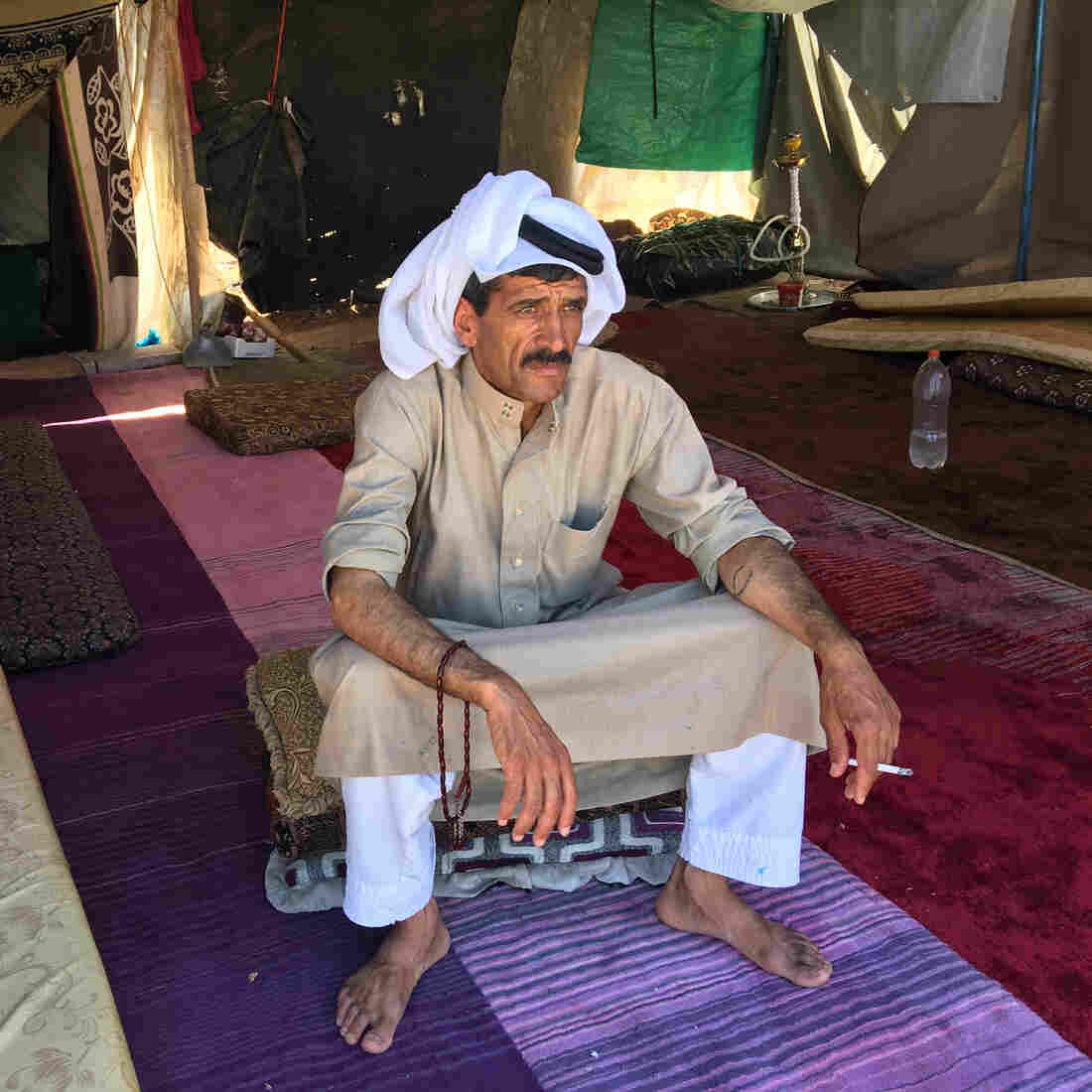 Syrian refugee Mohammad al-Saleh near Amman. He and his wife are farm laborers and were working in the fields when their tent caught fire in June, killing their four youngest children. Jane Arraf/NPR hide caption 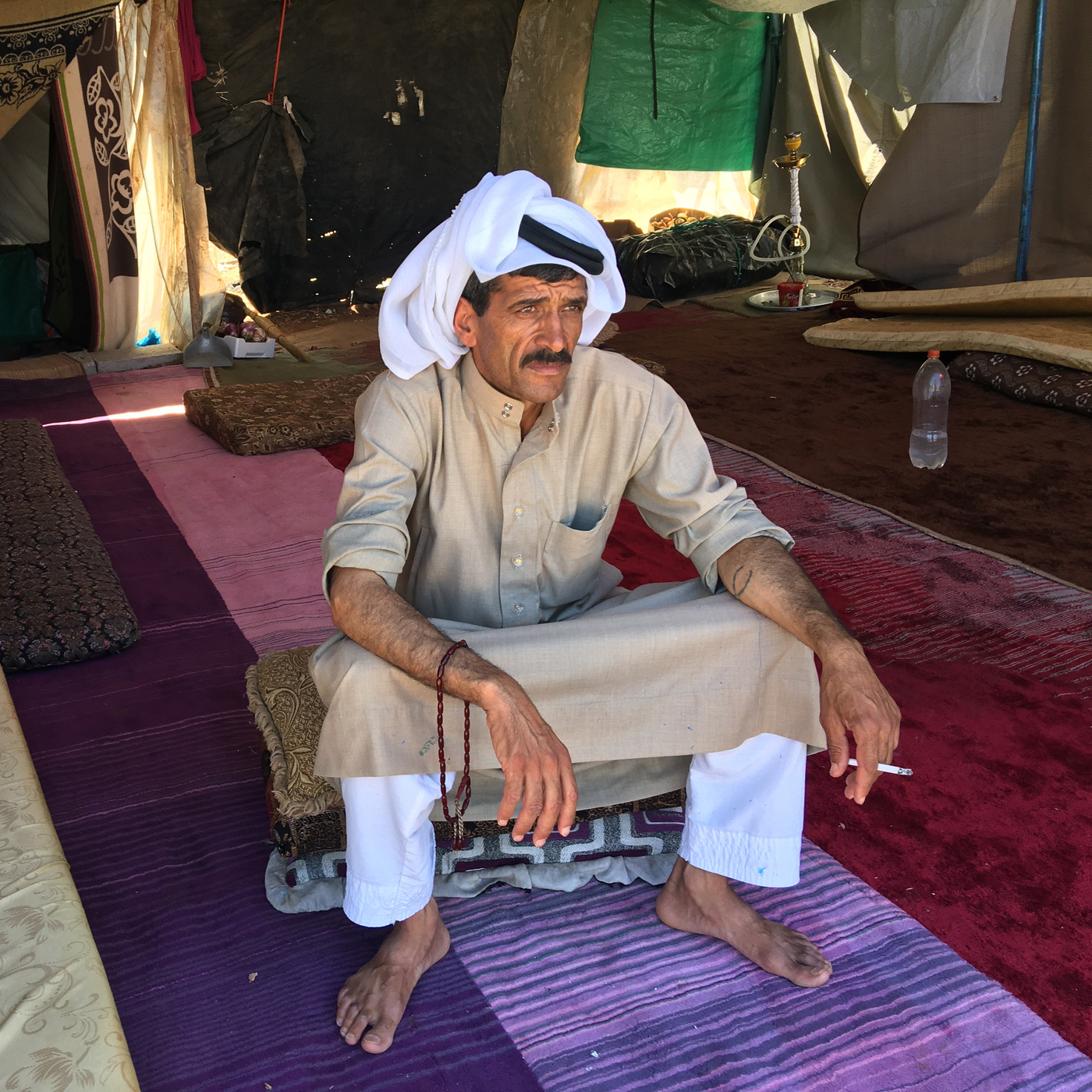 Syrian refugee Mohammad al-Saleh near Amman. He and his wife are farm laborers and were working in the fields when their tent caught fire in June, killing their four youngest children.

“We were running for our lives,” says Ftaim’s husband Mohammad al-Saleh, 43, a lean man wearing a tan-colored robe. “We thought we would just stay here for a while because it was a safe place for the children and then go back.”

There were no refugee camps when they arrived, and he says they were used to living in the countryside. So they found work on the farms, making about $ 1.40 an hour, less than Jordan’s minimum wage.

Three more children were born in Jordan. All perished in the fire, along with an older brother.

Ftaim, dressed in a traditional embroidered blue robe with a black scarf covering her hair, cries softly as her husband talks about the children they lost.

“Talal was 10,” Mohammad says, pointing out the boys in a photo on his phone. “Abdul Razaq was seven. Then there was Faris, who was two, and then Amjad. He was seven or eight months.”

The couple’s two eldest children, a 12-year-old girl and 15-year-old boy, were not in the tent when the fire broke out.

After the fire, the Salehs and about 35 of their relatives moved a few miles away. Relatives and friends took up a collection to buy Ftaim and Mohammad a spacious new tent — one with filmy, white fabric with a black embroidered pattern inside and a new carpet on the floor. Apart from a few mats and pillows on the floor, it is completely empty.

In the refugee encampments, families typically run electricity lines from the farms where they work — just enough to power light bulbs and aging air coolers that rattle in the 120-degree summers. On that morning in June, the Salehs had left for work in the strawberry fields, leaving their four youngest children sleeping when an electricity short started the fire.

“They came and told me, ‘Your children are dead — burned in a fire’,” says Mohammad. “When I arrived, the fire was out and the tent was burned to the ground. The children were completely burned — each one lying in a different place. Then the ambulance came and took them away.” 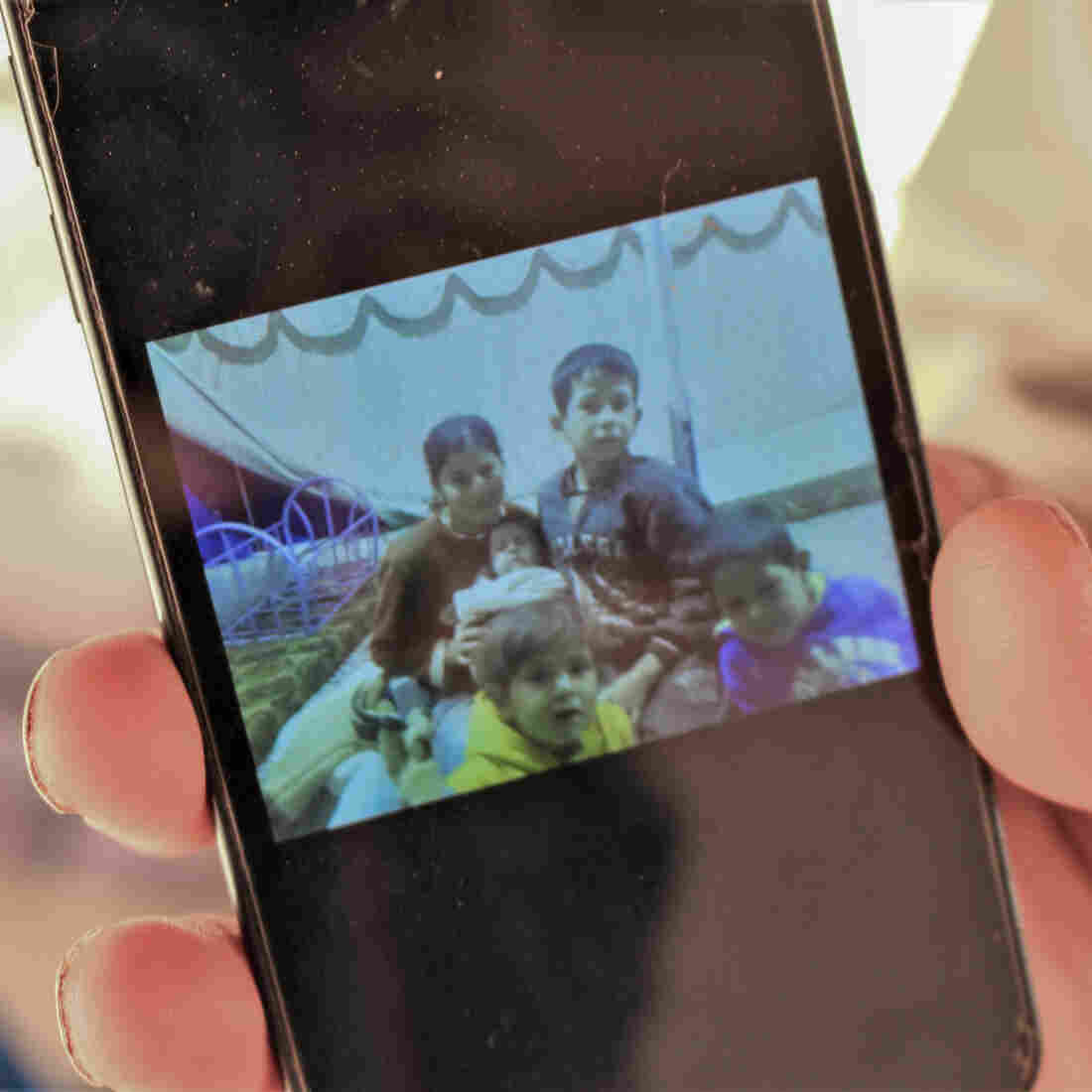 Mohammad al-Saleh holds his phone showing a photo of his children who burned to death in a tent fire in June. His eldest daughter, also in the photo, was not in the tent and is one of the family’s two surviving children. Shereen Nanish for NPR hide caption

The tent, made mostly of plastic, burned in minutes.

“It happened in the blink of an eye,” says Mohammad’s cousin Saleh Mohammad al-Saleh. “We were living next door and our own tent caught fire. Thank God we woke up in time and escaped with our kids.”

His own father recently moved back to Syria. The families would like to move back as well, but don’t have the money even to begin rebuilding their destroyed homes. With the small amount they make working in the fields going for food or to pay off debts from medical bills, they can never get ahead.

And Mohammed says these days, because of the coronavirus pandemic and Jordan’s economic downturn, there’s hardly any work.

“The markets themselves are dead — no one is buying or selling,” he says. “People started planting a month ago. I see they eat some of the crop and throw the rest away. If it doesn’t sell in the market, how are they going to employ workers?”

UNICEF provides latrines and occasional cash for the refugee families working on the farms. When schools are open, it sends minibuses to the farms to take children to class and discourage them from working in the fields. The agency says it will install circuit breakers in the tent communities to prevent more fires. 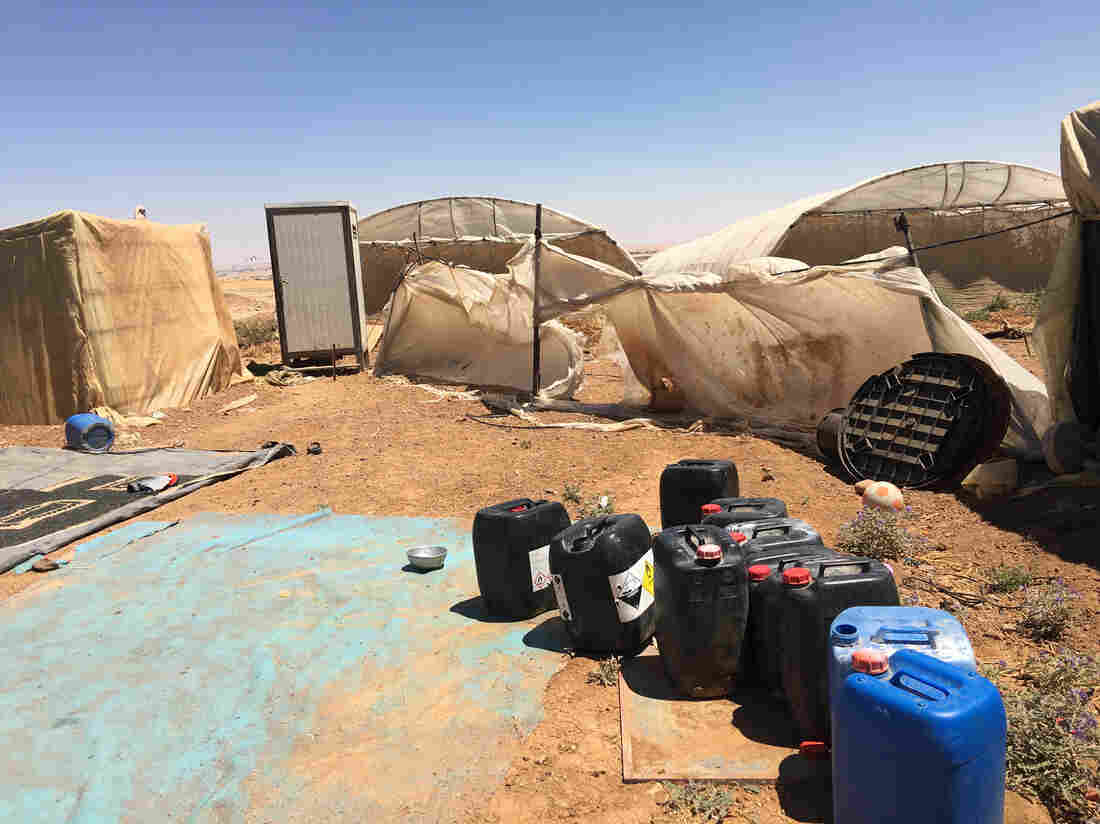 The Salehs’ home near the fields where they pick vegetables. They moved here with other relatives after the tent fire that killed four of their children in June at another encampment a few miles away, on the outskirts of Amman. Jane Arraf/NPR hide caption

Madleen, the Salehs’ 12-year-old daughter, says she has been trying to keep up with her lessons, which have been sent during the pandemic to her father’s mobile phone. She says she is hoping in-person classes will start again in the fall.

Near their new home, children chase each other through the dirt, around plastic canisters that previously contained fertilizer and now hold water. The blue cans are marked “nitric acid,” with a symbol warning of poison and explosives.

The tattered white edge of plastic sheeting rustles in the hot wind blowing through the fields of yellowing grass nearby. Parents say they’re afraid to leave babies on the tent floor because of scorpions and snakes.

Even before the tragedy that killed his children, Mohammad says it wasn’t a life.

“There’s no future here, whether you have children or not,” he says. “There’s no hope of anything. You go to work you come back and think about what you’re going to eat, how you’re going to sleep. When you’re outside your own country, that’s what it’s like.”

He says the accident was God’s will.

“What can we do?” he says. “We aren’t the first people or the last people to suffer this.”

And such is the superpower's commitment towards eventual unification, the island has no choice but to maintain an uneasy status quo in which it...
Read more