‘Not a perfect messenger’: Trump campaign goes all-in on Biden... 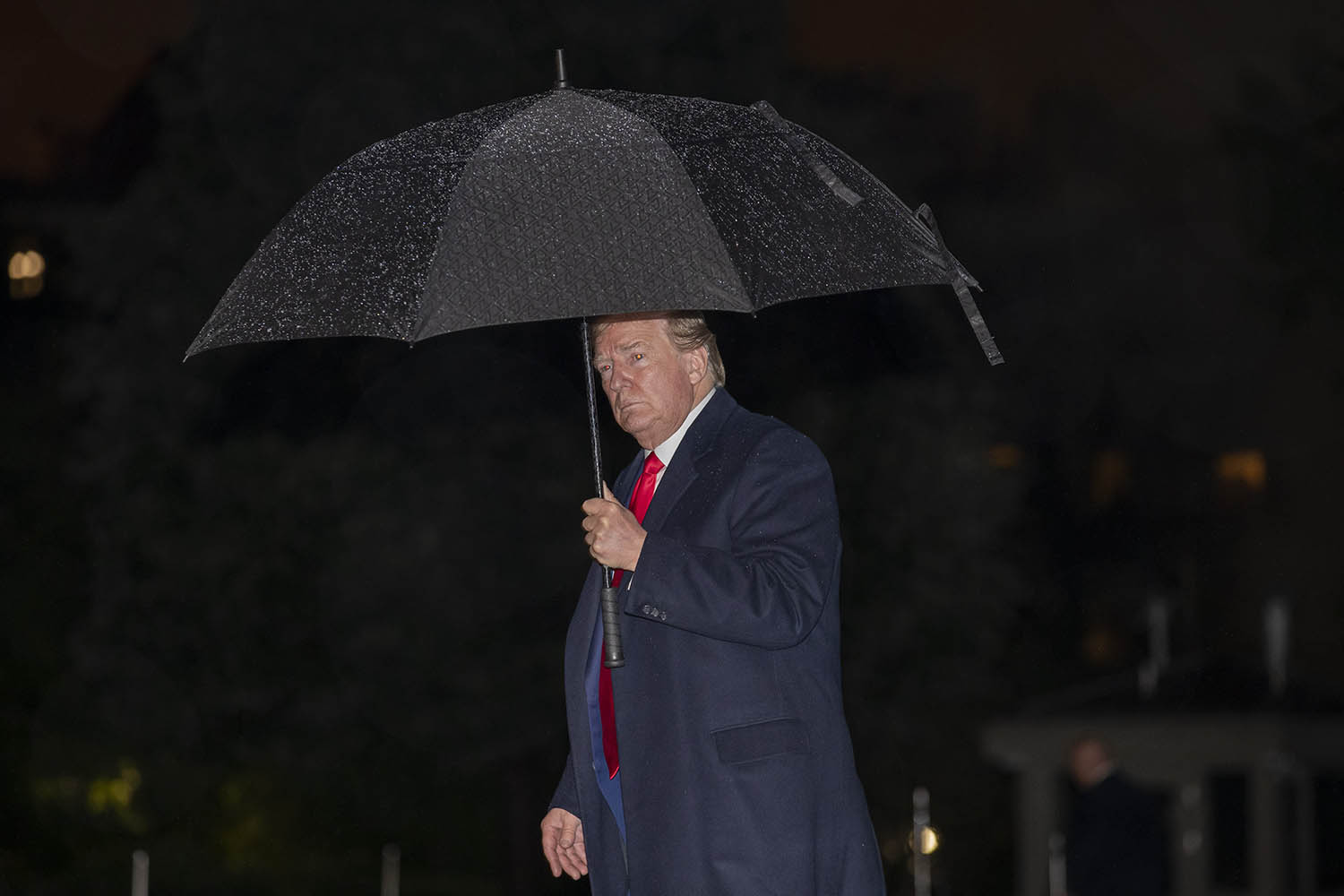 The Trump campaign is going all in on Tara Reade’s sexual assault allegations against Joe Biden.

Donald Trump? Not so much.

It’s a disconnect that stems from the different calculations each is making. The campaign sees a political opening. Aides and allies say they can use the allegation to call the former vice president a hypocrite for insisting women who accuse men of sexual assault should be believed — just not this one.

But on this one issue, Trump appears to see himself in Biden. He has talked about the allegation as akin to the more than 20 women who have — he claims — baselessly accused him of sexual misconduct. And he has compared it to the accusations against Brett Kavanaugh, whose confirmation to the Supreme Court he counts as one of the greatest achievements of his presidency.

Trump’s rare hesitation to go on the attack against a political opponent has not stopped campaign operatives from plotting a full-tilt offensive around the allegations. They have released an attack video, taken to social media, written op-eds and sent talking points to surrogates. They say the political benefits outweigh the drawback of reminding voters of the scores of women who have relayed various stories about Trump’s own alleged sexual misconduct.

The attacks go beyond accusing Biden and Democrats of a double standard.

Trump aides say the Reade allegation will remind voters of the year-old allegation against Biden for being too touchy with women. And, they say, it has revealed the media’s liberal slant for more aggressively covering Kavanaugh accuser Christine Blasey Ford than Reade.

A former senior administration official said Trump’s team has an advantage because Democrats have already set an expectation that women should be believed in such situations. But, the former official said, Trump is “not a perfect messenger on this, and we all know why and he should let the campaign and should let female surrogates drive a lot of this messaging in a way that it’s going to get out there.”

Reade came out publicly six weeks ago with her accusation that Biden sexually assaulted her in a Senate hallway in 1993, after saying last year he had touched her inappropriately but did not assault her. Others have come forward to say that she told them about the incident years ago, though none of the Senate aides Reade said she spoke to recalled the incident.

The accusations have resurfaced an incident that occurred just before Biden announced his run for president, when numerous women came forward to describe their discomfort with the former vice president’s overly familiar touching, including him rubbing their shoulders and whispering in their ears.

A Republican close to the campaign said the Reade accusation has fired up Trump’s base and given them “another tool in the toolbox” to run against Biden this November, along with their criticism that the former vice president is weak on China and inarticulate in interviews and speeches.

One in four Democratic voters who watched Biden’s first public interview about the incident last week said their party should select a different candidate, according to a Morning Consult poll.

But some Trump allies recognize the political risks of leaning into Reade’s allegations. Chief among them is the potential to go too far in pushing for Biden to face the same kind of treatment Republicans decried during Kavanaugh’s intense Supreme Court nomination hearings in the summer of 2018.

“I think when they focus on double standard they’ll have a lot of room to run with and an advantage, but when they focus on trying to tear down Biden as a bad guy they’re going to run into a scenario where they reach a point where voters think they’re overreaching,” the former administration official said.

Biden denied the allegation Friday and has asked the Senate and the National Archives to open up his papers to determine whether Reade filed a complaint about his actions. But he has declined to authorize the University of Delaware to release his documents, saying they do not contain personnel files.

His campaign pointed to Biden’s comments at a virtual fundraiser Friday in which he said women have to be heard to counter the argument that he’s changed his views from 2018. That year, after the accusations against Kavanaugh surfaced, Biden said: “For a woman to come forward in the glaring lights of focus, nationally, you’ve got to start off with the presumption that at least the essence of what she’s talking about is real.”

“It isn’t enough just to simply take my word for it and to dismiss it out of hand,” Biden told donors Friday. “Frankly, that shouldn’t be enough for anyone, because we know that this sort of approach is exactly how the culture of abuse has been allowed to fester for so long.”

Democrats say the cases against Biden and Kavanaugh are different. They have also called Reade’s story “inconsistent,” while noting Ford produced sworn affidavits, therapist’s notes and the results from a polygraph.

The Trump campaign has portrayed the situation differently, calling Biden a hypocrite. It released a statement focused on the “double standard” of his words and a video titled, “Exposed: Democrats’ double standard on believing women” that replays Biden and other Democrats’ comments about Kavanaugh’s accusers.

“The only thing Joe Biden did today was dig himself a deeper hole,” Trump campaign spokesman Erin Perrine said. “He once again demonstrated that he believes he should be held to a different standard than he has set for others.”

Corey Lewandowski, a senior adviser to the campaign, wrote an op-ed in The Hill newspaper and then followed up with interviews on nearly two dozen radio shows across the country — including stations in Maine, Wisconsin and Washington — to talk about the issue. “This is about the hypocrisy of the far left,” he said on Fox Across America with Jimmy Failla.

The Republican National Committee’s rapid response team accused the media of ignoring the allegations. After a 1993 Larry King interview with Reade’s mother emerged, the RNC blasted out emails that accused cable talk shows of failing to ask questions about the video. RNC Chairwoman Ronna McDaniel said any news outlet that did not ask about the allegations should be banned from hosting a Democratic debate. “It went from ‘me too, me too, me too’ to ‘move on, move on, move on’ in a nanosecond because he’s a Democrat,” McDaniel said on ABC News.

Trump allies also anticipate that Biden’s potential vice presidential pick might have to explain their response to the Kavanaugh accusers in light of Reade’s allegations. Biden has vowed to pick a female running mate.

“These female VP candidates are being put in really awkward positions,” a person close to the campaign said. “No matter who he picks, they’re going to have to answer a lot of questions about Tara Reade and previous statements they’ve made about believing survivors.”

Conversely, Trump has barely discussed the themes that his political advisers are hammering in interviews, op-eds, social media posts and on television.

Trump did mention the “double standard,” but he also said the accusation against Biden could be false, like the ones he said were made against him and Kavanaugh.

“I’ve been falsely accused by people that I’ve never even seen,” Trump told conservative radio host Dan Bongino. “And some of these people, I met them — zero interest, OK? Like zero. So I guess in a way you could say I’m, I’m sticking up for him.”

Trump aides denied any difference in how Trump and the campaign are handling the accusations, arguing the president can offer his advice to Biden while also inviting more scrutiny of the former vice president.

At least one Republican who speaks to Trump praised Trump’s approach, saying it “keeps the focus on Biden, and off of allegations against Trump, the perfect tactic, actually.”

The allegations against Trump are extensive. More than 20 women have publicly accused Trump of sexual misconduct over several decades. Last year, journalist E. Jean Carroll accused Trump of raping her in the 1990s inside a dressing room at a department store. He has denied all the allegations made against him.

“Leave it to the media to really take an issue about the former vice president and turn it on the president and bring up accusations from four years ago that were asked and answered in the form of the vote of the American people,” she said.