Not dangerous: DeVos defends schools reopening according to CDC guidelines 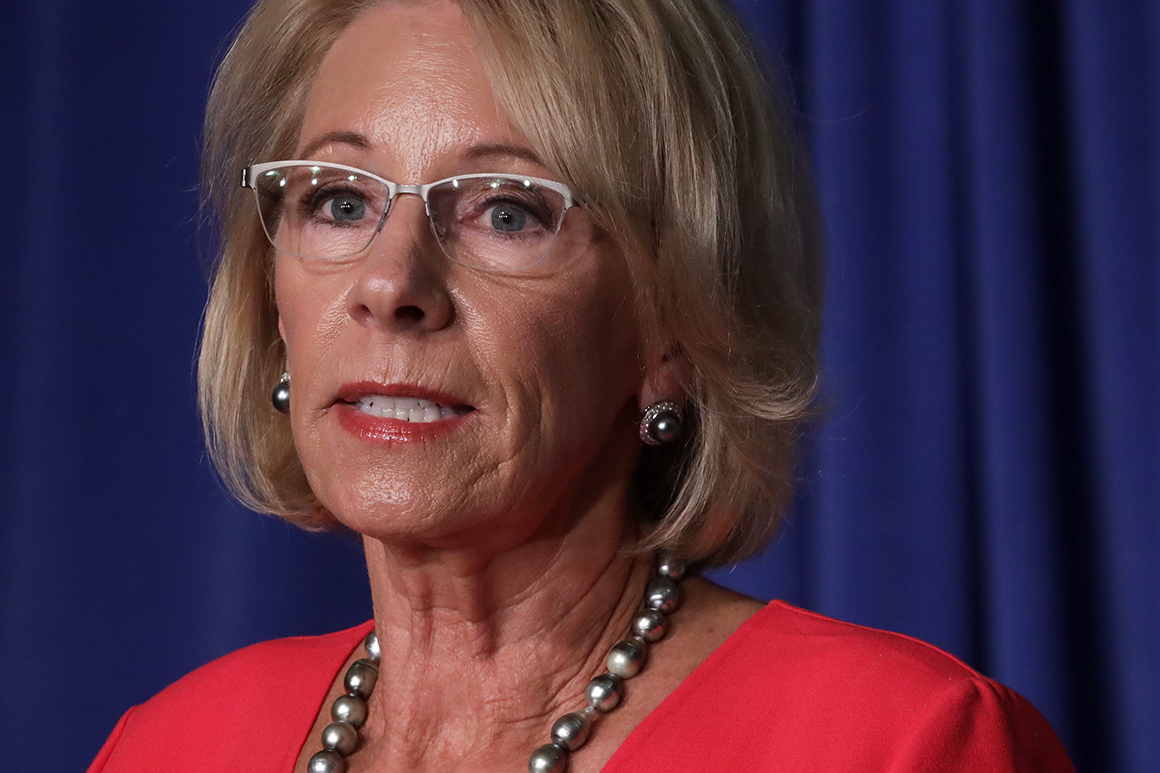 “But the key is, there has to be a posture of doing something, of action, of getting things going, putting a plan together for your specific school, for your specific district or for your classroom that ensures that kids are going to start learning again this fall,” she said.

The secretary also asserted that the CDC never recommended shuttering schools to begin with, though most did as the virus began to take hold in the U.S. this spring.

DeVos’ defense of the CDC’s guidelines comes days after Trump railed against them, calling them too burdensome and prompting Vice President Mike Pence to suggest the agency would soften its recommendations, a prospect CDC Director Robert Redfield denied.

Adm. Brett Giroir, an assistant secretary at the Department of Health and Human Services who serves as the administration’s coronavirus testing czar, also defended the recommendations Sunday, calling them “right on target.”

“They are CDC guidelines but we all work on them together — all the docs on the task force, the interagency, and we feel they’re pretty strong,” Giroir, a pediatrician, said in an interview on ABC’s “This Week With George Stephanopoulos.”

Jerome Adams, the surgeon general, called the CDC guidelines “best-case scenarios,” offering as an example CDC’s recommendation that children bring their own lunch to school.

“We know that in some school districts and many school districts, over 50 percent of kids are eating lunch at school and don’t have the ability to bring their own lunch,” he said, explaining that health officials would need to work directly with local school districts on such issues “and help them figure out, OK, if you can’t do what is the gold standard, best-case scenario, can you do something that’s a compromise to safely reopen? That’s what we’re talking about when we talk about issuing new, more specific recommendations that we can look at school district by school district.”

The administration has upped its pressure campaign on education significantly in recent weeks, with officials arguing that keeping children out of school for extended periods can be more detrimental than potential exposure to the virus and pointing to countries who have gotten the virus under control and successfully resumed in-person schooling.

Last week, the Department of Homeland Security said it would kick out foreigners who are in the U.S. on student visas if their college does not plan to resume at least some in-person classes.

The Trump administration’s insistence on reopening schools in spite of cases continuing to climb — and its threat to withhold federal funding from schools that don’t resume in-person instruction — has met fierce pushback, from teachers unions and superintendents to pediatricians and even GOP-leaning groups.

House Speaker Nancy Pelosi slammed the secretary’s aggressive push, claiming the secretary’s comments were “appalling” and amounted to “malfeasance and dereliction of duty.”

“They’re messing — the president and his administration — they are messing with the health of our children. We all want our children to go back to school. Teachers do, parents do, and children do,” Pelosi said on “State of the Union.”

“But they must go back safely. And when you hear what the administration is saying, we know that they have no appreciation for the failure that has brought us to this point,” she continued. “Going back to school presents the biggest risk for the spread of the coronavirus. They ignore science and they ignore governance in order to make this happen.”

But DeVos asserted Sunday: “There’s nothing in the data that suggests that kids being in school is in any way dangerous.”

“We know that children contract and have the virus at far lower incidence than any other part of the population,” she continued, though coronavirus testing rates among children are lower. Children are thought to be less likely to show symptoms of the virus even as they remain capable of spreading it to others, which is one major fear, but others may still get seriously ill and even die.

Giroir also played down the risks to children.

“We know from other countries particularly young children do not seem to spread the virus. We know they don’t get sick,” he said, though Giroir contended that getting the virus under control should be a key priority. “When we get the virus more under control then we can think about how we put children back in the classroom.”

The data on children transmitting coronavirus “isn’t definitive,” he said on CBS’ “Face the Nation, “but it’s certainly suggestive.”

“While the balance of the data shows that kids are less susceptible to infection and less likely to transmit it, less susceptible doesn’t mean they’re not susceptible,” he explained, noting that for the most part throughout the pandemic, younger children have mostly been “sheltered” from the virus.

Still, DeVos reiterated that “we want kids to get back to school,” stressing that a partial reopening plan was insufficient in her view.

On CNN, she pointed to Fairfax County in Northern Virginia, whose plan to offer either full-time online instruction or two days of in-school classes plus independent study at home she has called out by name in recent days.

“These are not valid options and choices for families and it’s not full-time instruction,” she said of plans like Fairfax’s.

Scott Brabrand, superintendent of the Fairfax County School Board, pushed back on DeVos’ criticism.

“The guidelines for six-feet social distancing simply mean that you can’t put every kid back in a school with the existing square footage footprint. It’s just that simple,“ Brabrand said on CNN’s “State of the Union.”

Though Trump appears to have demanded schools open this fall regardless, DeVos suggested some flexibility even as she argued school systems should not be “paralyzed” by fear of the virus.

“If there’s a short term flare-up for a few days, that’s a different situation than planning for an entire school year in anticipation for something that hasn’t happened,” she told CNN host Dana Bash. “Kids have got to be back at school, they’ve got to be back in the classroom. Working families have got to have their kids back in school.”

She argued that schools in a virus hot spot could deal with reopening “on a school-by-school or case-by-case basis.”

“There’s many counties across the country that have virtually no cases. Schools need to be looking at the data right on the ground where they are,” she said.

Gottlieb also criticized an across the board push to reopen schools, saying that “districts need discretion to try to put in place measures to keep kids safe.”

The former FDA commissioner argued that administration officials’ attempts to point to other countries reopening their schools with few problems lacked proper context.

“No other country, with the exception maybe of Sweden, reopened their schools or kept their schools open against the backdrop of so much spread that we’re attempting to do in this country,” he said.

DeVos also doubled down on the Trump administration’s threat to withhold federal funding from schools that refuse to reopen, first leveled by Trump in a tweet last week.

The secretary wouldn’t say how the administration would accomplish such a move, which would likely need congressional approval, but argued that “investment in education is a promise to students and their families.”

“If schools aren’t going to reopen and not fulfill that promise, they shouldn’t get the funds. And give it to the families to decide to go to a school that is going to meet that promise,” she contended.

In Maryland, though, Gov. Larry Hogan said his state would not relent to the administration’s pressure campaign, and would let science dictate its school reopening.

“We’re not going to be rushed into this,” the Republican said on NBC’s “Meet the Press.”