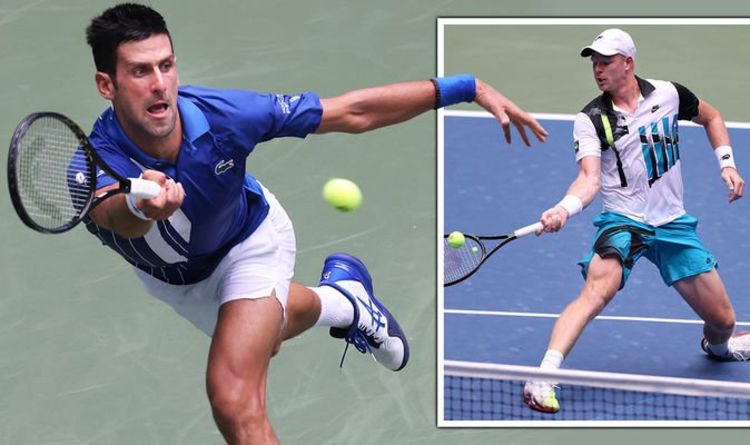 Novak Djokovic doused a red-hot start from Kyle Edmund but failed to catch fire as he reached the third round of the US Open.

And the world No.1 needed to scream at the empty stands in search of inspiration as he won his 25th consecutive match of the year in anti-climactic style.

The British No 2 played a blistering first set in the New York heat and took the first tiebreak of the year off the tournament favourite.

Edmund could not maintain the pressure and the Australian Open champion restored order to win 6-7 6-3 6-4 6-2.

“Obviously Kyle played a fantastic first set – he didn’t do too much wrong,” said the Serbian superstar.

“He served very well and was aggressive from the back of the court. It was anybody’s game really for a set and a half.

“Overall it was a very good test and I am happy to get through. I am happy for this grind.”

But Djokovic was broken twice in a flat third set and he will need to raise his level to win his 18th Grand Slam title.

The world No 44 had matched the best player on the planet in his high-class first set as the No.1 seed over-employed the drop shot.

Edmund cheekily went off for a toilet break before Djokovic was about to serve to stay in the set at 5-6 – and then took the tiebreak with a booming ace down the middle after 68 minutes.

The Serbian superstar had not lost any of his 10 previous tiebreaks in 2020. Edmund also took the first set off Djokovic at Wimbledon in 2018 and lost in four and history was to repeat itself.

The big shift in momentum came in the fourth game of the second set when he sent down two double faults as he was broken for the first time.

In a scrappy second third which saw five breaks of serve, Djokovic won 12 consecutive points to go a double break up.

But the lack of atmosphere in the Arthur Ashe Stadium caused the three-time US Open champion to lose concentration and Edmund broke his serve twice for the only time in the match before Djokovic finally served out the set.

The Serb let out a primordial scream after breaking the Yorkshireman for a fifth time in the first game of the fourth set and maintained the intensity – and the shouting – to close out the win.

The three-time US Open champion said: “We miss the fans. We miss the noise and the energy. That is how I like to play, bring the energy on the court. I just had to stay in there mentally. I had to stay tough.”