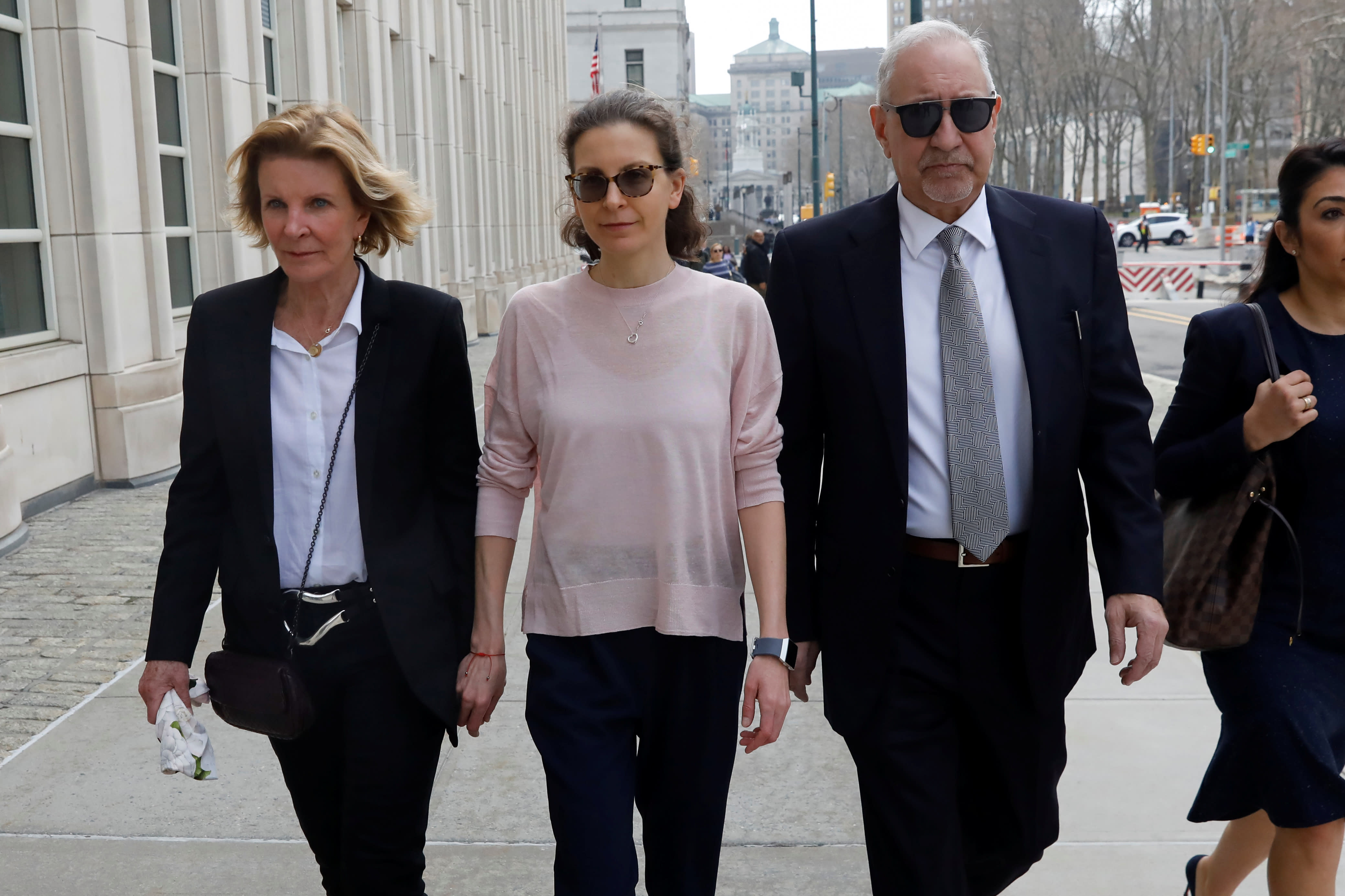 Clare Bronfman will be sentenced on Wednesday for her role in NXIVM, a “self-help group” that prosecutors say operated as a pyramid scheme and sex-trafficking cult. She is the first of six of the organization’s prominent members to be sentenced. Bronfman, an heiress to the Seagram liquor fortune, helped bankroll NXIVM for years.

In April 2019, Bronfman pleaded guilty to charges including identity theft and immigration fraud. While she expressed remorse for breaking the law, that’s about it. Bronfman’s attorneys claimed she was unaware of the secret women-branding sorority within NXIVM called DOS, in which “slaves” were directed to engage in sexual acts with Raniere. Bronfman “renounces sex trafficking and human trafficking in their entirety: full stop,” her lawyers stated. But she won’t renounce Raniere.

Prosecutors are asking Bronfman receive five years in prison for her crimes, and in the sentencing memorandum obtained by Yahoo Entertainment, they note her unwavering loyalty to the group’s leader. “Even now — after Raniere’s convictions for sex trafficking, forced labor, alien smuggling and child exploitation offenses — Bronfman continues to support Raniere,” it reads.

While some are surprised at Bronfman’s loyalty, psychologist and Yahoo Mental Health Contributor Dr. Jen Hartstein explains how disavowing Raniere could prove challenging.

“Many people, when in a group like NXIVM, suffer from psychological manipulation,” she tells Yahoo Entertainment. “There is a coercive control from the leader of the [group], which causes those involved to pledge devotion to him [or] her and their rules. Often, those involved are isolated, lonely and looking to connect to someone who can make them feel a part of something. It is hard to believe that that person would do anything to harm them in any way.”

Bronfman made that clear in a letter to a Brooklyn federal judge last month in which she said “NXIVM and Keith greatly changed my life for the better.”

“There is possibly a belief that her own needs are not as important as the leaders, so she will sacrifice herself for him,” Hartstein speculates. “In many ways, it’s a brainwashing of sorts, leaving no room, at this time, for alternative beliefs or ideas.”

Bronfman joined NXIVM in the early 2000s and has been entangled with Raniere for years. “Most of my teenage years and early 20s, I was ashamed of who I was, constantly focused on my shortcomings and ridden with self-hate,” she wrote in the letter. “NXIVM changed that. I learned a sense of who I am beyond my faults and the tools of how to transform things I didn’t like about myself into traits and behaviors I do. I started to embrace myself and turn outwardly to care for and help others.”

Hartstein says Bronfman may have “a very hard time” shaking the life she had within the cult.

“There isn’t much research on how everyone fares,” Hartstein adds. “Some are more psychologically damaged as they reenter the world at large, learning how to interact. With support through therapy and within their families, many can learn how to recover and reengage.”

Reversing the effects of brainwashing in cult-like organizations can take time.

“It can be very hard to undo the programming that someone has had when being part of a group like NXIVM. It requires helping that individual let go of the beliefs that they had, and to really see the damage that was done,” Hartstein explains. “It requires a lot of psychotherapy to educate the member on the negative and harmful teachings that they might have experienced.”

Hartstein says it also requires “family members to be open and available and nonjudgmental. Most of all, it requires patience as the individual learns to think about their former life critically.”

“Many people, including most of my own family, believe I should disavow Keith and NXIVM, and that I have not is hard for them to understand or accept,” she noted in her letter.

Whether the judge will take any mental health factors into consideration when sentencing Bronfman remains to be seen. Wednesday’s hearing is scheduled for 8 a.m. in Brooklyn Federal Court.