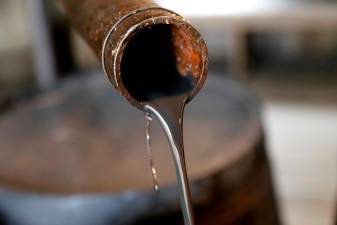 TOKYO: Oil prices fell on Friday for a third day, with Brent crude set for its biggest weekly drop since 1991 and U.S. crude heading for the worst week since 2008 as panic about plunging demand from the coronavirus outbreak grips the market.

A flood of low-priced oil into the market from Saudi Arabia and the United Arab Emirates is intensifying the pressure on prices after the collapse of a price supporting agreement with Russia last week.

“With the coronavirus triggering the first global oil demand drop in years, the surge of Saudi Arabian and Russian oil production could lead to a supply overhang of 4 million barrels per day,” Eurasia Group said.

Four million barrels is about 4% of daily global consumption before the coronavirus outbreak that started in China.

Oil prices were also impacted by record declines in equity markets with Japan’s Nikkei 225 falling by 10% on Friday after U.S. markets fell by the most since Black Monday in 1987 on Thursday.

U.S. President Donald Trump announced a ban on travel to the United States from Europe that sent the markets swooning as everything from sporting events to weddings were cancelled across many parts of the world with the coronavirus spreading to more countries. – Reuters