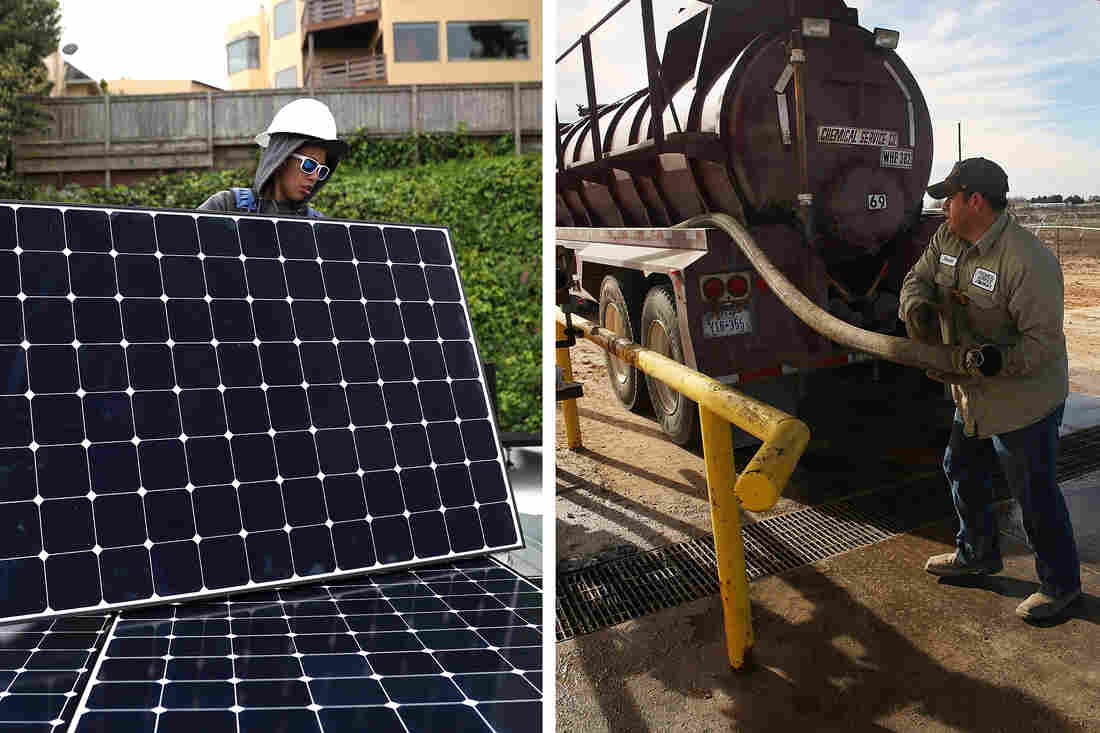 Left: Luminalt employee Pam Quan installs solar panels on the roof of a home in San Francisco in 2018. Right: An oilfield worker fills his truck with water before heading to a drilling site in the Permian Basin oil field in Andrews, Texas, in 2016. Justin Sullivan and Spencer Platt/Getty Images hide caption 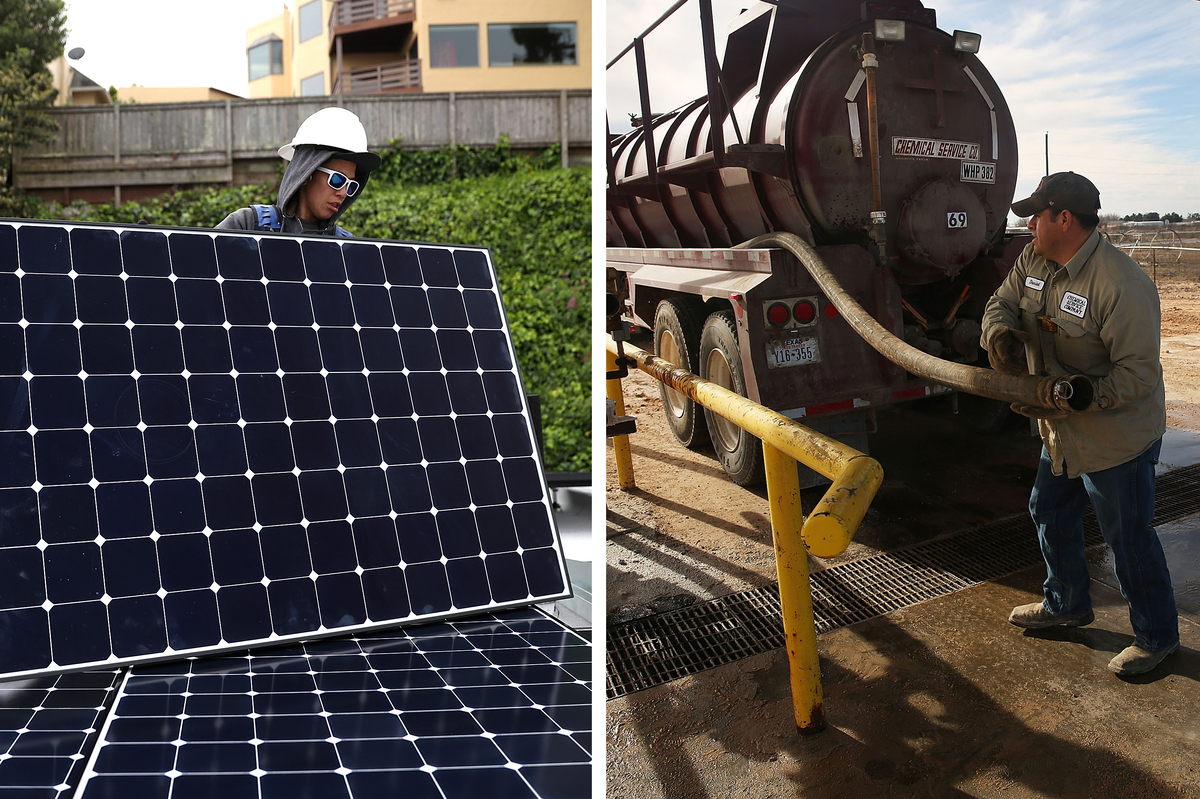 Left: Luminalt employee Pam Quan installs solar panels on the roof of a home in San Francisco in 2018. Right: An oilfield worker fills his truck with water before heading to a drilling site in the Permian Basin oil field in Andrews, Texas, in 2016.

In 2008, Daimon Rhea moved to Utah to find work in the oil fields. He didn’t have any experience — and he didn’t need any.

“I was out there for two days and I had a job making about $ 30 an hour,” he says. He started as a roughneck, doing hard physical labor on drilling sites, and easily pulled in double what he could have earned back home in California.

“I was able to turn my life around,” Rhea says.

It wasn’t easy — the hours were rough as a single dad — but Rhea was making great money.

But he started to get weary of the repeated rounds of layoffs as the industry went through its boom and bust cycles. Rhea eventually walked away from the high pay of the oil fields and found work in construction instead.

“I was tired of living by just the cost of a barrel,” he says. “My life depended on how much that barrel cost.”

Oil and gas jobs are lucrative but volatile. They can create incredible opportunities, particularly for workers without college degrees, but they can disappear at the drop of a spot price.

Energy jobs have become a major issue in the 2020 campaign, with climate change likely to be a topic in the debate Thursday between President Trump and former Vice President Joe Biden.

Trump has repeatedly vowed to defend oil and gas jobs against efforts to reduce carbon emissions. Meanwhile, Biden is promising to shift away from fossil fuels and create new “clean energy” jobs in renewable electricity and energy efficiency.

For now, times are tough whether you’re working in oil or clean energy. Huge layoffs have shrunk the workforce across both sectors by more than 15 percent.

But millions of Americans are still employed in the energy sector, and a major transition in how we power our economic would affect what jobs are available.

Clean energy jobs pay better than the typical U.S. job, up to 25% more or some $ 2-$ 5 more per hour, according to recent research from Brookings and an upcoming report commissioned by E2.

“You just have a straight sort of linear trend in most of those occupations over time, not the wild fluctuations that you see in oil,” she says.

Jobs in energy efficiency — working to make buildings easier to cool and heat — have historically been relatively stable, too.

That’s the main reason Chris Martinez got into the industry nine years ago. He had been a roofer, and was frustrated with the seasonal nature of that work. Like Rhea in the Utah oil fields, he turned to a job that didn’t require any expertise to start out.

“I’d never stepped foot in an attic,” he says, laughing. “I didn’t know what ductwork was.”

Martinez appreciates the stability of his new industry. And, he says, it’s nice to work for a company driven by a passion for sustainability.

Pollak of ZipRecruiter says that sense of purpose is used by clean energy companies to recruit workers. In job postings, “the overall goal and mission of these jobs is really clear,” she says. “Very aspirational goals to save the planet.”

Joe Green, who grew up in Pennsylvania coal country, understands firsthand the power of an environmental mission. His grandfather was a miner; he says coal raised, fed and educated him. The devastation it created surrounded him, too.

Green had worked in wind energy for years, then briefly had a stint hauling coal. One day, he got a phone call while he was sitting in his truck, right after finishing a run.

“Close your eyes and imagine,” he says. “Here’s this truck that is on top of a big, black bank … there’s the spoil piles to the north. To the south is the co-generation plant that burns the waste coal. There’s a crusher there, dust everywhere. It’s just dirty.”

He could see the local damage done by the industry — streams that had been dead his whole life, but which he had to imagine were beautiful once. He couldn’t see the carbon emissions, but he thought about them, too. He thought about it a lot.

He picked up the phone. It was a colleague calling to ask if he’d be interested in getting back into renewables — solar, this time. It wasn’t a hard choice for him.

Other workers in fossil fuel industries, though, might be facing the more difficult decision to accept lower pay — if they can even find a new job.

But Rhea, the former oil worker who started a new career in construction, sees the energy landscape shifting. He encourages his former colleagues to get creative instead of getting angry.

“It’s like they’re mailmen getting mad at email,” he says. “Times are changing. You have to adapt.”