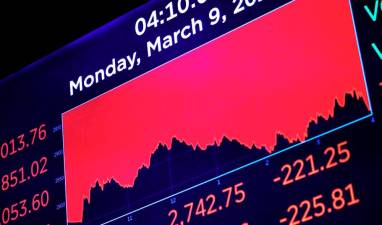 HONG KONG: A bounce in the price of oil provided some support to under-pressure stocks in early Asian trade on Tuesday, a day after global equities suffered their biggest losses in more than a decade.

Global stock markets had capitulated on what has become known as “Black Monday”, with the Dow on Wall Street plunging more than 2,000 points, triggering an emergency break in early trade.

But there was some relief on Tuesday as oil prices jumped around six percent after plunging by a third the previous day, in their worst session since the 1991 Gulf War.

Equity markets were a lot calmer across Asia, though they continued to fluctuate through the morning.

Traders remain on edge and AxiCorp’s Stephen Innes warned the panic had not yet stopped, with “growing evidence that an oil shock of historic proportions is now underway”.

“Severe weakness in energy markets is quickly cascading into broader declines in commodity markets, high-yield credit, and equities,“ he said.

He added that “a fiscal response is wholly justified, and regardless of whether or not governments can respond fast enough, all they need to do is drop a number”.

If the “US, China, Europe, and Japan get on the phone and agree on a figure like something in the quadrillions, the fiscal pump will likely provide oil markets with a much-needed Alka-Seltzer moment”.

Speculation is mounting that the Federal Reserve will cut interest rates again, having slashed them last week, while the European Central Bank is due to meet this week.

And Donald Trump said his administration would be meeting lawmakers to discuss economic relief measures to mitigate the impact of the disease as it spreads through the United States.

Still, while governments and central banks have unleashed, or are preparing to unleash, stimulus, the spread of COVID-19 is putting a huge strain on economies and stoking concerns of a worldwide recession.

But that has now been compounded by an oil price war between Saudi Arabia and Russia.

Top exporter Saudi Arabia slashed the prices it charges customers following a bust-up with Moscow over crude output cuts, starting a price war that sent traders into a tailspin.

Chris Lafakis, energy economist at Moody’s Analytics, said: “With COVID-19 already savaging demand for travel and transportation, the last thing oil producers needed was a supply shock that would hit their pocketbooks even more.

“The world is now drowning in a glut of crude oil that appears likely to persist for months.”

The panic was felt around the world, with Frankfurt seeing its sharpest single fall since 2001, London’s FTSE losing more than seven percent and Paris collapsing more than eight percent in its worst daily drop since the 2008 financial crisis.

The rush for safe investments also sent yields on US Treasuries to record lows.

While the outbreak appears to be slowing in China, investors are desperately looking for signs of an easing in Europe and the United States.

Italy is now the worst-hit country outside China, with more than 9,000 cases and hundreds of deaths. On Monday, Prime Minister Giuseppe Conte said he was extending restrictions on travel and public gatherings initially imposed on the north to the entire country. Milan’s FTSE MIB crashed 11 percent Monday. -AFP