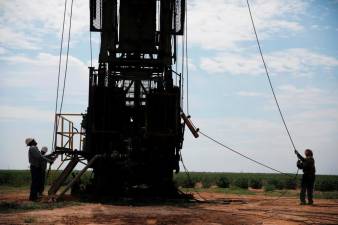 TOKYO: Oil prices slumped again on Thursday amid a broader market rout after the United States banned travel from Europe following a declaration that the coronavirus outbreak is now a pandemic.

The threat of a flood of cheap supply compounded market concerns as Saudi Arabia promised to raise oil output to a record high in a standoff with Russia.

Oil is down around 50% from highs reached in January.

Global shares also crumbled after U.S. President Donald Trump said the United States will suspend all travel from Europe as he unveiled measures to contain the coronavirus epidemic.

On supply, the United Arab Emirates followed Saudi Arabia in announcing plans to boost oil output after the collapse last week of an agreement between OPEC, Russia and other producers, a grouping known as OPEC+, to withhold supply and buttress prices.

UAE’s national oil company, ADNOC, said it plans to raise crude sales to more than 4 million barrels per day (bpd) and accelerate a push to boost capacity by a quarter to 5 million bpd.

“Without OPEC+, the global oil market has lost its regulator and now only market mechanisms can dictate the balance between supply and demand,“ said Espen Erlingsen, head of upstream research at Rystad Energy, which estimates that oil will need to fall to the low $ 20s to achieve equilibrium.

The U.S. Energy Information Administration (EIA) and the Organization of the Petroleum Exporting Countries (OPEC) have slashed forecasts for oil demand because of the coronavirus outbreak and now expect demand to contract this quarter.