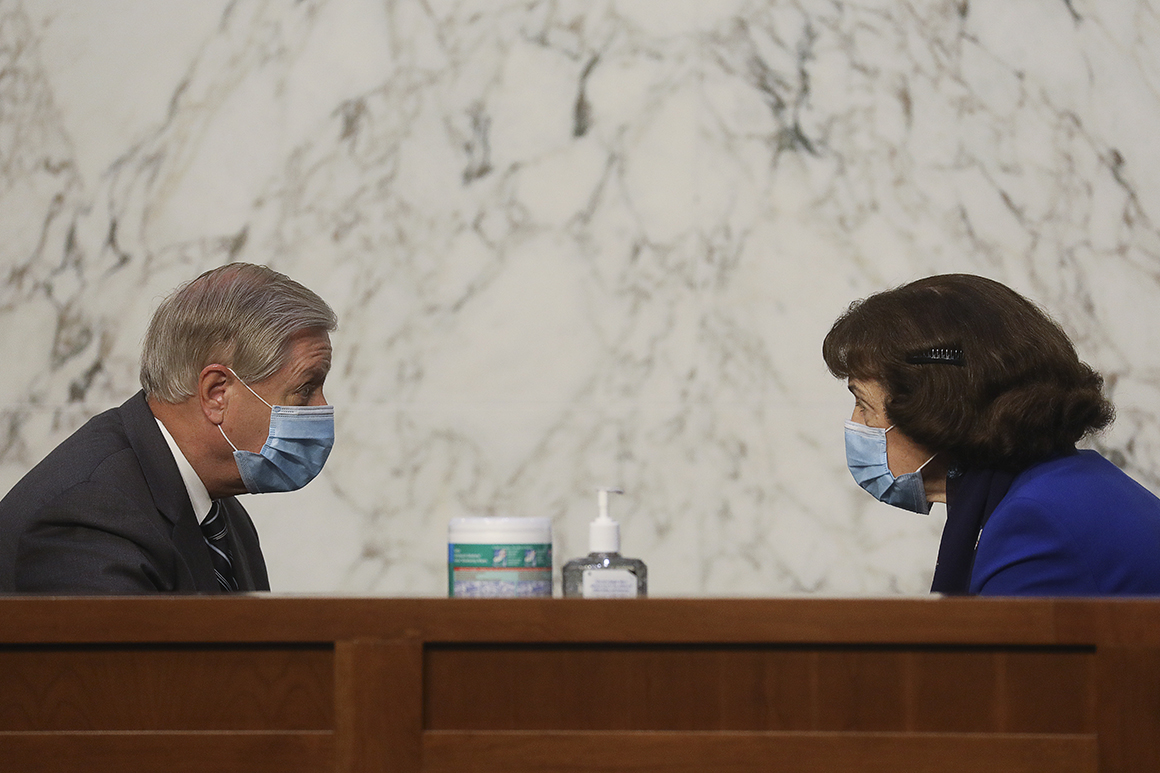 “Unless something really dramatic happens, all Republicans will vote yes and all Democrats will vote no,” Judiciary Committee Chairman Lindsey Graham (R-S.C.) said, though he acknowledged that “this is going to be a long, contentious week.”

Still, the stakes are high for members of both parties, with the presidential election only three weeks away and Democrats feeling increasingly confident they will take back the Senate. Meanwhile, Senate Republicans are hoping that the Supreme Court vacancy will energize their voters, with President Donald Trump trailing former Vice President Joe Biden in most national polls and in key swing states.

Democrats maintained Monday that the public agrees with their calls to fill the Supreme Court vacancy after the Nov. 3 election, a position they say will invigorate voters.

“They may have the votes on this committee, but they don’t have the American people on their side — their votes. They don’t have history on their side,” said Sen. Richard Blumenthal (D-Conn.), a reference to the ongoing election and Democrats’ efforts to put health care at the top of voters’ minds yet again.

Democrats have displayed a united front heading into the four-day slate of hearings, calling attention to the Trump administration’s efforts to get rid of the Affordable Care Act and what they see as Senate Republicans’ hypocrisy in seeking to confirm Barrett, 48, to the high court so close to the election.

In 2016, Republicans blocked Obama’s nominee to the Supreme Court, Merrick Garland, arguing at the time that it was because the vacancy opened up during an election year when the Senate and the White House were controlled by different parties. Democrats have accused Senate Majority Leader Mitch McConnell (R-Ky.) of breaking his word.

“Eighty minutes after we learned of Justice Ginsburg’s death, McConnell signaled he would fill the vacancy,” said Sen. Sheldon Whitehouse (D-R.I.). “When they blocked Merrick Garland, we heard non-stop about the importance of the election.”

Democrats say Republicans are trying to fill the seat in time for the Supreme Court to hear the Trump administration’s challenge to the 2010 health care law just one week after Election Day. Trump previously said he wants his judicial appointees to rule against Obamacare, thrusting health care to the forefront as Americans are already heading to the polls.

Senate Republicans, however, argue that it’s presumptuous to assume that Barrett would strike down Obamacare. Trump weighed in Monday on the health care issue, saying that “Republicans must state loudly and clearly that we are going to provide much better health care at a much lower cost.”

“It sounds as if one of the attacks against her will be the allegation that if she is confirmed to be on the Supreme Court, she will be on a mission from God to personally deny insurance coverage to all Americans [with] pre-existing conditions,” Sen. John Kennedy (R-La.) said. “I think most of my colleagues know that’s not true.”

In their opening remarks, some Senate Republicans suggested that Democrats would attack Barrett for her Catholicism. Sen. John Cornyn (R-Texas), addressing Barrett, said that he remained concerned “about some of the earlier attacks on your faith” and said “Democrats on and off the committee want a real fight.” During her 2017 confirmation hearing for her current judgeship, Feinstein told Barrett that the “dogma lives loudly within you.”

But so far Democrats are steering clear of Barrett’s religion. Instead, they’re focusing on the proximity to the election.

Graham acknowledged that the Senate was confirming a Supreme Court justice after voting has already started — an apparent nod to Democrats’ criticisms — but said the committee was running the process “constitutionally.”

Democrats have said the entire process is illegitimate, contending that Republicans broke their word about confirming Supreme Court nominees in an election year. In their opening remarks, Democrats focused more of their criticism on McConnell (R-Ky.) and Trump. They paid little attention to Barrett’s qualifications or her record as a federal judge on the 7th Circuit Court of Appeals.

“Voting is underway in 40 states. Senate Republicans are pressing forward, full speed ahead, to consolidate a court that will carry their policies forward,” said Sen. Dianne Feinstein of California, the committee’s ranking Democrat.

Sen. Kamala Harris (D-Calif.), the Democratic vice presidential nominee, appeared remotely before the committee to give her opening statement, taking a day off the campaign trail.

“Republicans finally realized the ACA is too popular to repeal in Congress, so now they are trying to bypass the will of voters and have the Supreme Court do their dirty work,” Harris said.

As Monday’s session went on, Trump weighed in via Twitter, accusing Democrats of making “self-serving statements.” He appeared to urge Senate Republican leaders to scrap the hearings altogether and move forward with a confirmation vote.

As a result, some senators did not attend Monday’s session in person, instead opting to give their opening statements remotely, including Tillis. Lee, however, attended the hearing. His office posted a letter from the congressional physician Monday saying that the Utah Republican has “met criteria to end COVID-19 isolation for those with mild to moderate disease.”

Ahead of the hearing, a group of Democrats called on Graham to require coronavirus tests for all senators, citing the recent outbreak. Graham rejected those calls, citing guidance from the Office of the Attending Physician of the Capitol.

The Senate’s last Supreme Court confirmation battle took place over Justice Brett Kavanaugh in 2018. His confirmation hearings were particularly ugly, especially after allegations of sexual assault surfaced against him.

Barrett gave an opening statement at the conclusion of Monday’s session, mostly detailing her family life and professional experience. She lauded the late Justice Antonin Scalia, for whom she clerked, and reiterated that she shares his judicial philosophy.

“Courts are not designed to solve every problem or right every wrong in our public life,” said Barrett, who spoke to the committee for about 15 minutes. She wore a mask throughout the hearing but removed it to deliver her opening remarks.

On Tuesday and Wednesday, Barrett will field questions from senators on a wide range of topics. On Thursday, outside witnesses will testify about Barrett, and the committee will vote on her nomination next week. Republican leaders are aiming to hold a final confirmation vote on the Senate floor the week before the election.

If confirmed, Barrett will occupy the seat left vacant by the late Ruth Bader Ginsburg, who died on Sept. 18. After she died, her family said that Ginsburg’s “most fervent wish” was that she not be replaced “until a new president is installed.”

John Bresnahan contributed to this report.