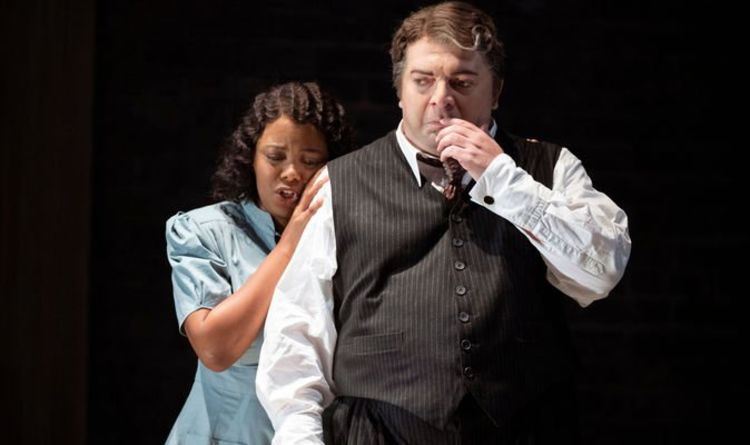 Each year, the Glyndebourne tour gives a marvellous opportunity to show off the emerging artists from their training scheme and chorus, which are as talented as any such group in the world. Accompanied by some leading young instrumentalists in the orchestra, the tour, which this year visits Canterbury, Milton Keynes, Woking, Norwich and Liverpool, offers a great chance for youth to make its mark and a glorious opportunity for audiences to see some stars of the future in places where high-class opera may be a rare treat.

Verdi’s Rigoletto is one of the greatest and most popular of all operas but amazingly it has never been performed at Glyndebourne before. The plot is intensely dramatic and the music matches it with perfect effect. Rigoletto, the hunchbacked jester, seeks revenge on his employer, the Duke of Mantua, for generally being a bit of a cad but specifically for kidnapping and seducing the daughter he cherishes and has kept hidden away. It all goes wrong and Rigoletto is the one who suffers most, which provides Verdi with the opportunity for music of rare power and beauty.

The Georgian baritone Nikoloz Lagvilava plays the title role in great style, while South African soprano Vuvu Mpofu is outstanding as his daughter Gilda. Italian tenor Matteo Lippi brings a voice of great power to the part of the Duke of Mantua, which he swaggers through in appropriately impressive style, while the leading roles are completed by Russian bass Oleg Budaratskiy who is splendidly sinister as the assassin Sparafucile.

Which brings us to the production. In general, I have always felt that the first duty of a good director is to be loyal to the original composer and librettist. A director’s desire to do something original should be restricted to making subtle changes that enhance the story rather than change it, or introduce visual treats or movement that add to the audience’s enjoyment when the onstage action needs it. In my experience, Glyndebourne has been the opera house that sticks best to this rule and is least likely to embrace a dodgy originality for its own sake. With this Rigoletto, however, the German director Christiane Lutz goes too far.

The defect of the production can be summed up in one question: what do Rigoletto and Charlie Chaplin have in common? The answer, of course, is nothing at all, or at best, very little. Yet in her quest for modern relevance, Lutz sets the story in some sort of Hollywood film studio with the Duke of Mantua as some sort of Harvey Weinstein figure and Rigoletto making his entrance with a Charlie Chaplin impersonation.

There was also a weird introduction during the overture in which a man takes most of his clothes off and an aged Rigoletto is interviewed. I must be missing something, but I could also make nothing of the appearance of a grey-haired individual apparently scrubbing the floor while Rigoletto and his daughter (who, we are encouraged to believe, may not be his daughter after all) are having an emotional conversation. Victor Hugo, who wrote the original story on which this opera is based, would, I feel sure, have been utterly bemused.

For anyone considering a visit to the Glyndebourne Tour this year, the music and the quality of the soloists and the orchestra make this still worth seeing, but Annabel Arden’s glorious production of Donizetti’s comic L’Elisir d’Amore or Robert Carsen’s outrageously amusing staging of Handel’s Rinaldo are more likely to bring unalloyed pleasure.

Booking: See www.glyndebourne.com/tour/ for full details of venues and dates for all this year’s Glyndebourne touring operas.