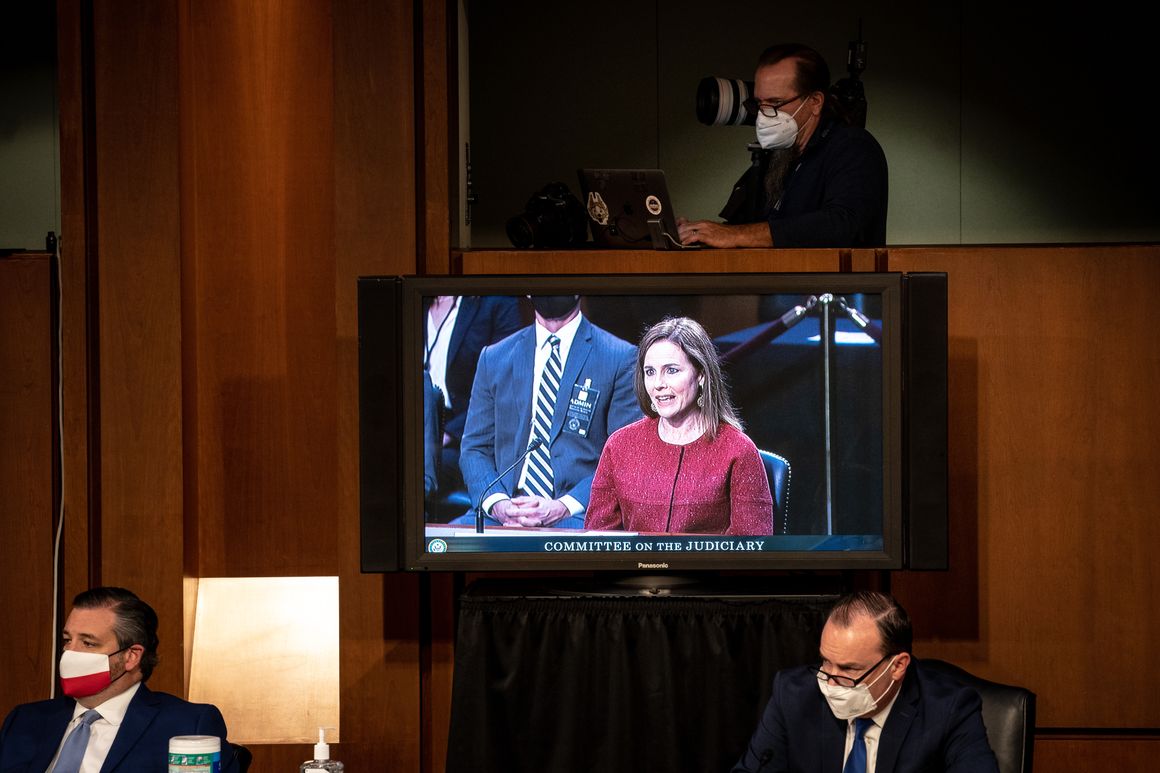 If Democratic senators want to dismantle the false notion that conservative judges don’t allow factors other than “the law” to influence their reading of the Constitution, and in the process learn more about what Barrett actually thinks, they might try pursuing these lines of inquiry:

A week after the election, the Supreme Court will face the questions of whether the Affordable Care Act (ACA) is constitutional, and whether the heart of the statute—and thus health care coverage for millions of Americans—can be salvaged if the individual mandate is struck down. You called this a question of “severability.” But the statute itself does not clearly answer the “severability” question. It’s up to the Supreme Court justices to do that. As a textualist and an originalist, you appear to argue that there is only one legitimate way to answer these questions. What in your view is the “right” way to balance the will of Congress against the proper “reading” of text that the nine individuals on the Supreme Court did not draft? Would you err on the side of preserving the statute, on the theory that Congress passed the law in its capacity as “the people’s representatives” and that it’s not the Court’s role to dismantle the “policy” decisions of the legislature? In short, how deferential should courts be when asked to obliterate an act of Congress that represents the will of the people?

You have said that originalism is not “mechanical,” and that even conservative justices disagree on what is the best textualist or originalist reading of a legal text. You thus agree that the law is often ambiguous, and that individual judges must resolve that ambiguity. You even testified that, for certain parts of the Constitution, only “the principle” can be understood, and that the principle is “capable of being applied to current circumstances.” (This sounds a lot like the concept of “living constitutionalism,” which you disagree with.)

In order to resolve ambiguity, you offered that “original public meaning controls”—and “not the subjective intent of any drafter.” By “original public meaning,” you meant that “the law is what the people understood it to be.” But the First Amendment, which you cited as an example of a constitutional “principle,” was ratified in 1791. What makes you more equipped to decide what the public in the 18th century understood the text to be than another judge? If your point is that you know it when you see it, it sounds a lot like the “law of Amy.”

3. What Happens When the Constitution Is Silent?

You say that judges don’t make law, that they are only supposed to impose the law as written, and that “disturbing, changing, updating” the law is improper. You have seven children. Presumably, you would agree that the government should not have the power to come into your home and tell you how to raise your kids by, for example, dictating whether they go to college or become professional athletes.

Is there anything in the Constitution that says the government can’t tell you how to raise your kids? Given that the Constitution is silent on this issue, a textualist might be expected to adhere to this lack of textual support if faced with a law aimed at controlling child-rearing. Indeed, in his dissent in Obergefell v. Hodges, your mentor, Justice Antonin Scalia, bemoaned the lack of textual support for a constitutional right to gay marriage. It turns out that the Supreme Court in 1923 found a right to bring up children as parents see fit—in the Due Process Clause. Roe v. Wade applied the same approach to due process as that case, Meyer v. Nebraska. So why would the right to raise one’s children be protected from government infringement but not the right to make choices about whether to have children?

4. To Speak or Not to Speak

You testified that you cannot weigh in on particular cases or even particular legal issues. But you did discuss Second Amendment case law, offering that District of Columbia v. Heller—which upheld an individual right to own a gun for self-defense in the home under the Second Amendment—“leaves room for gun regulations.” You also critiqued the overall state of Supreme Court precedent under the First Amendment’s Establishment Clause, which at its core forbids government from sponsoring religion, and endorsed Brown v. Board of Education, calling it a “super-precedent” (but refused to put Roe in that category). As a textualist and originalist, how did you decide which cases you can and cannot weigh in on during these hearings? Before your confirmation to the 7th Circuit Court of Appeals, you expressed an opinion on NFIB v. Sebelius, which upheld Congress’s constitutional authority to enact Obamacare. You indicated that Chief Justice Roberts’ opinion upholding the ACA pushed the statute “beyond its plausible meaning.” Why didn’t that commentary disqualify you from any future ACA case as a matter of the “judicial canon”?

The problem with Barrett’s testimony thus far is its intellectual inconsistency. Judges judge. The Constitution and statutes inevitably contain ambiguous language. Judges resolve that ambiguity. All judges do this.

Barrett claims to resolve ambiguity by applying the law as written, but admits that the exercise is not mechanical, and that even conservative judges don’t always agree. Barrett then points to the understanding of the public at the time a document was written. What did “the public” understand the word “equal” to mean in 1868, for example, when the 14th Amendment was ratified? At that point, women couldn’t vote. Are they part of the “public” that Barrett would defer to when she identifies the original “public meaning” of the term, purportedly devoid of her own ideology?

One thing is for certain: We know how Justice Ruth Bader Ginsburg would have answered that question.