Orionids 2019: When is the next Halley’s Comet flyby of Earth? Look for fireballs tonight 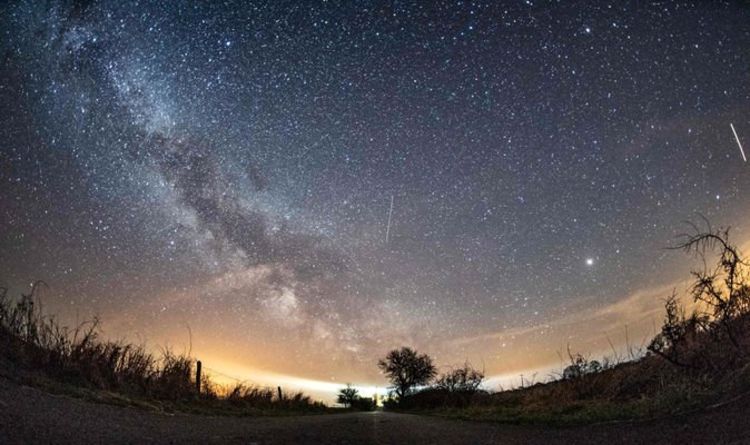 Fragments from Halley’s Comet are briefly streaking across tonight’s autumnal skies tonight. This is because the annual Orionid meteor shower is again peaking during its regular rotation around the Sun. The stunning shooting star show will feature trailed meteors appearing so bright they are easily visible even to the naked eye. Astronomers will be lucky to spot one or two fireballs grazing the atmosphere.

Meteor showers occur when cosmic debris from asteroids and comets streak across the night sky.

In tonight’s example, Orionid meteors consist of the remnants of Halley’s Comet as it orbits the Sun.

The comet itself has a long 75-year orbit, but its remains are scattered along its route.

A few week-long period around October or November witnesses Earth pass through this field of asteroid debris.

The comets slam into Earth’s atmosphere at incredible speeds and incinerate, creating the meteor shower.

When is the next Halley’s Comet flyby of Earth?

US-based space agency NASA calculates comets are capable of reaching speeds of up to 41 miles per second (66km per second) as they hurtle across the heavens.

Royal Observatory Greenwich said in a statement: “The Orionid meteor shower is one of the best known and most reliable meteor showers in the annual calendar, visible from across the globe.

“Some people view the shower as extra special as the meteors are actually pieces of Comet 1P/Halley, famously known as Halley’s comet.

“The famous comet swings by the earth only once every 75 to 76 years but this annual shower provides some compensation for those who may miss that once in a lifetime event.”

The next predicted perihelion of Halley’s Comet is 28 July 2061.

The comet is expected to be better positioned for observation than during the 1985–1986 apparition, as it will be on the same side of the Sun as Earth.

Viewing tips for the Orionids 2019:

It is surprisingly simple to see the Orionids with the naked due to the intensity of the meteor shower.

However cityscapes, light pollution and cloudy weather can hinder your chances of catching a glimpse of the Orionids.

Heading away from urban areas to the countryside on a clear night, far away from nearby light will yield the best results.

The Royal Observatory Greenwich said: “They can be seen with the naked eye so there’s no need for binoculars or a telescope, though you will need to allow your eyes to adjust to the dark.

“The showers will continue at a reduced rate, so if the Moon obscures the peak, you may still be able to catch a few throughout the rest of October.”

The Orionids appear as though they originate from the Orion constellation.

Stargazers, however, will unlikely see them until they have moved from Orion in a random direction.

Orion consequently will not help onlookers spot the meteors, although they can trace meteors back to the constellation.

It is recommended to use an AR smartphone app like Night Sky to track down the constellation.