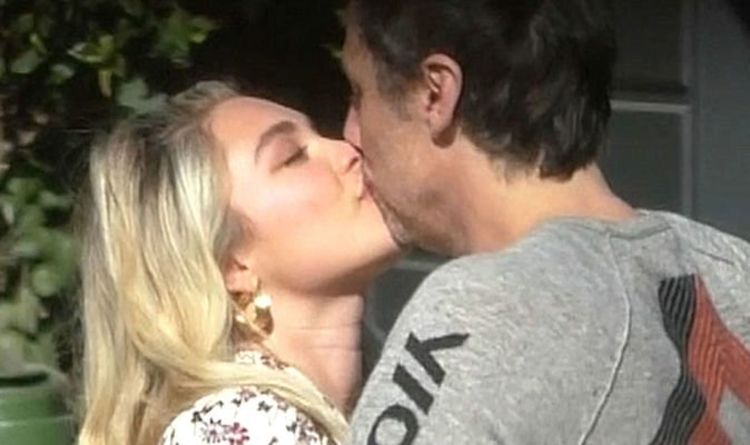 After a gruelling round of media appearances yesterday, she ran into the arms of her actor partner Zach Braff, 44, for some more celebrating at their West Hollywood hotel. Earlier, Florence – who has been nominated for her role as Amy March in Little Women – shared a photo of the moment she found out she was up for the gong. In the snap she is seen wearing nothing but a sheet and a huge smile in bed while looking at her phone. The caption reads: “#nominated #for a ******* oscar!!!!!!”

Florence Pugh heads off to celebrate her Oscar nomination, with her partner, Zach Braff (Image: SPLASH)

Florence Pugh is congratulated on her success by her partner, Zach Braff (Image: SPLASH)

Florence has been nominated for her role as Amy March in Little Women (Image: Getty)

She also exhibited her cheeky sense of humour the day before when online trolls made digs at her age difference with Zach.

Hitting back with sass, Florence wrote: “And yet he got it.”

The actress – who has been dating the Scrubs star since last April – will be up against stiff competition when Oscars night arrives next month.

But perhaps Florence won’t be so downhearted if she loses out to Scarlett – as the pair are co-starring in Black Widow later this year.

Florence, who plays a sister figure to Scarlet’s assassin lead, said: “I mean, the fact that I got to do a film with Scarlett was really magical.”

Whatever the result in Los Angeles on Oscars night – broadcast in Britain early on February 10 – there will no doubt be plenty of partying 5,000 miles away in Oxford.

Florence’s dad Clinton Pugh owns a restaurant there, while mum Deborah is a dancer.