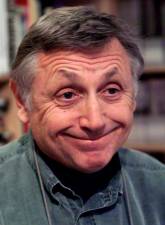 Menzel was part of the Czech New Wave of filmmakers of the 1960s that included One Flew Over the Cuckoo’s Nest and Amadeus director Milos Forman and avant-garde director Vera Chytilova.

He struggled with serious health problems and rarely appeared in public after brain surgery in 2017.

“Dearest Jirka, I thank you for each and single day I could spend with you. Each was extraordinary. I am also grateful to you for the last three years, as hard as they were,“ his wife wrote in her post.

She said Menzel died at home on Saturday.

It was based on a novel by Czech writer Bohumil Hrabal, whose works were a source of other Menzel films, including I Served the King of England in 2006.

“I had more luck than reason,“ he said in 2016, recalling his Oscar-winning movie. “More than all the prizes and medals I received for this movie, I valued the lifelong friendship with Hrabal.”

Like other directors of his generation, Menzel faced problems with Communist authorities.

His 1969 film, Larks on a String, depicting a group of politically persecuted people forced to work in a scrapyard, was not shown in his home country until 1990.

It went on to win the Golden Bear at the Berlin International Film Festival in 1990.

Menzel excelled in bittersweet depictions of life, with doses of humour and nostalgia. Many of his works are revered among Czech audiences.

Menzel’s 1985 film, My Sweet Little Village, was nominated for an Oscar and a number of his other movies have become classics for Czech film watchers and directors.

Menzel also acted in dozens of movies and plays. A bachelor late into life, he and Menzelova, a film producer, married in 2004.

“I thank him for everything he did for us. Goodbye, sir!” film director Jan Hrebejk, who was nominated for an Oscar for his 2000 film, Divided We Fall, wrote on Twitter.- Reuters

UP TO to 90 whales have died after becoming stranded in a remote bay in southern Australia, with rescuers warning Sept 22 the mission...
Read more
Entertainment

THE creators of big Emmy winner Watchmen, a timely blend of superheroes and political satire that confronts US racism, say they are proud to...
Read more
Entertainment

CHINESE tech giant Tencent’s WeChat messaging app has seen a surge in downloads in the United States since Sept 18 after Washington confirmed it...
Read more
Entertainment