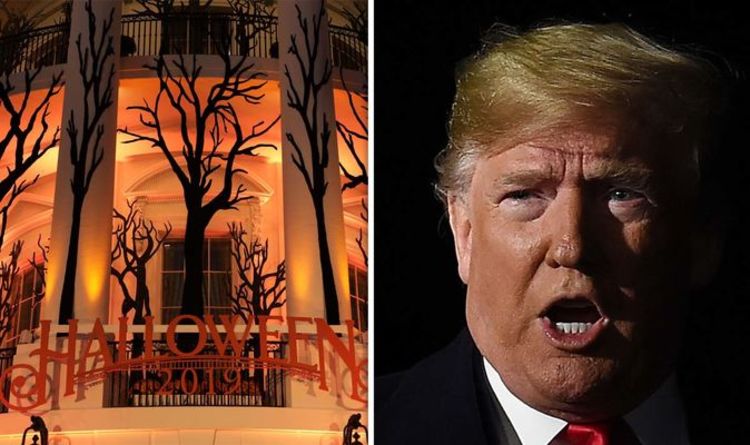 Photos of the mural were given to Yahoo News. The office building is used by White House Staff and the party included the families of government employees and VIP guests. One person who attended the October 25 party said: “Horrified.

The building is home to an office for the vice President of the US and hosts several support staff from the West Wing.

The West Wing of the White House contains the Oval Office, the Cabinet Room, the Situation Room and the Roosevelt Room, a meeting room.

The Eisenhower Executive Office Building stands across from the White House.

The mural in question was on the first floor, outside the speechwriter’s office and next to the digital strategy office.

It is understood children were given paper imitating bricks and told to write their name and place it on a marker on the wall.

Photos seemed to suggest Mike Pence was present for the party according to Yahoo News.

A spokesman for the vice-President said he did not go beyond his second floor office.

Since his election, some barriers have been replaced but work on extending barriers only began this year.

13 miles of new barrier has begun construction in the Texan Rio Grande Valley.

Trump gained extra budgetary funding for his wall by declaring a state of emergency.

In May this year, almost 133,000 people were detained for attempting to illegally cross the border.

This was the highest number in 13 years.

Trump is seeking re-election in next year’s Presidential election.

He is facing Mark Sanford, Joe Walsh and Bill Weld for the Republican nomination.

Trump is favourite to secure the nomination.

He is also favourite to win when the election comes according to Oddschecker.

Facebook
Twitter
Pinterest
WhatsApp
Linkedin
ReddIt
Email
Tumblr
VK
Previous articleXbox Live free games ALERT: Time running out to download THESE free Xbox One games
Next articleDeclan Donnelly: I’m a Celebrity host’s net worth – how much does he have in the bank?