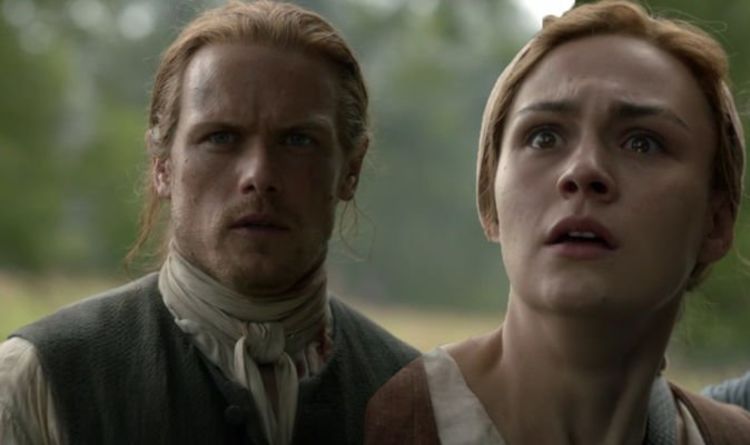 Outlander dropped a couple of enormous bombshells on Starz fans last weekend, as Murtagh Fitzgibbons (played by Duncan Lacroix) was killed off during a battle in an attempt to save Jamie Fraser (Sam Heughan). However, the final stinger of the episode was the reveal that Roger Mackenzie (Richard Rankin) had been hanged alongside some regulator rebels.

Obviously, Roger was attempting to tell the regulators to leave and save themselves, before being caught up in the madness of war.

Unfortunately for Roger, if he has been killed off, he leaves behind not only a wife, Brianna Fraser (Sophie Skelton), but his newborn son, Jemmy, as well.

Fans have not yet seen Brianna’s reaction to the show’s latest death, but they will surely see her grief continue in the upcoming episode this weekend.

Before that, however, Brianna star Sophie has now spoken out about filming that scene, and discussed how “brutal” it was to bring to screen.

Speaking to Collider about the show’s most harrowing scene of the season, she spoke vividly about the scene in question.

READ MORE: Outlander cancelled: Why is Outlander not on this week?

“As a wife,” she added. “As soon as I saw the bodies hanging from the tree, you’d be able to identify a husband.”

Unfortunately, viewers will have to wait until this weekend to see if Roger has survived the hanging.

Until then, Murtagh star Duncan has been speaking out about the death of his iconic character.

And during the latest interview, he explained Murtagh’s final words mirror that of his final words in the books.