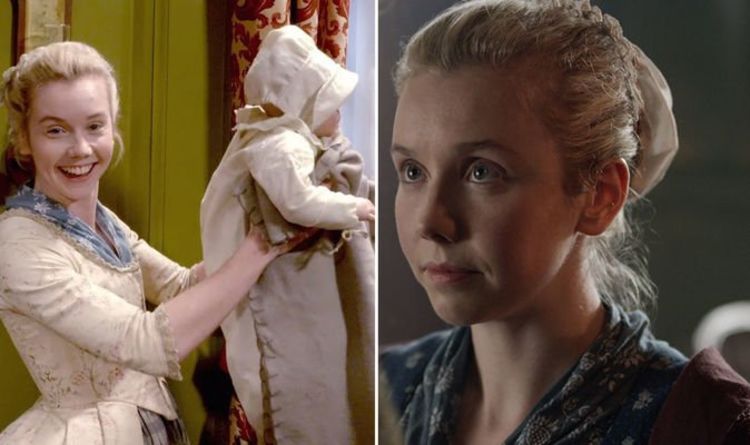 As the Starz series returns for its highly anticipated fifth season, fans are eagerly awaiting for the events of one of the bloodiest books in the series, The Fiery Cross, to get underway. For better or worse, some sequences won’t make it past Outlander’s cutting room.

The cult series follows the surprising life of Claire Randall (played by Caitriona Balfe), a nurse in the 1940s who is hurled backwards through time after surviving the Second World War.

She ends up in 18th Century Scotland, whereupon she meets and falls in love with the dashing Jamie Fraser (Sam Heughan).

Their romance is frequently interrupted by historical conflicts, but luckily Claire’s medical skills developed under the pressure of WWII help her and those around her survive.

During the third season, Claire took on Marsali (Lauren Lyle) as her protégé.

Speaking to Digital Spy she said: “Someone said to me… they tweeted me, they were like: ‘You know that the way you give birth in book five [The Fiery Cross] is post-coital?’ and I was like ‘What the f*** are you talking about?’”

During the interview she laughed jovially but the scene definitely would have been a shock to more sensitive viewers.

The television series has trimmed Marsali’s role as a mother somewhat, but she gives birth to her second daughter, Félicité in the fifth book.

In the adapted series, Marsali’s romance with husband Fergus (César Domboy) is certainly steamy, but Lauren was glad her role in the series wouldn’t push the boundaries that far.

She added: “They tried to tell me that we have sex and immediately I give birth straight away after that, and I was like ‘That’ll be awful!’

“‘If we were to watch that, that would just be… I don’t want to do that at all. I don’t want anyone to see that, that’s a messy process on both sides.'”

Pregnancy sex is certainly not unheard of in film and TV, with some projects trying their best to represent the procedure faithfully.

However, the effects and manoeuvres involved can be complicated and unpleasant for the actors so it was a win for Lauren when she decided she wasn’t up for it.