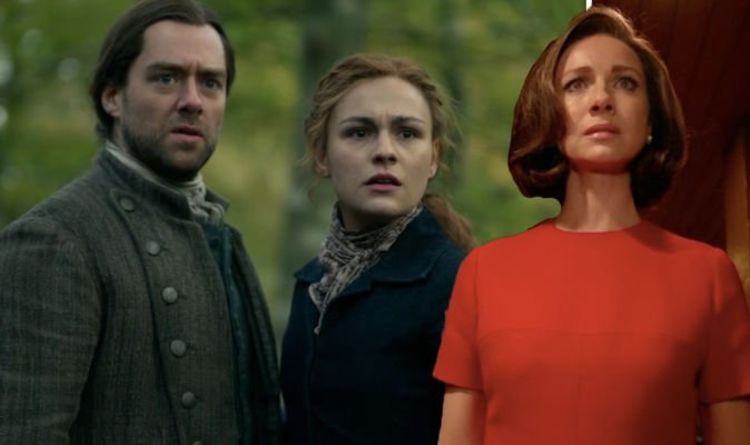 Outlander concluded its fifth season earlier this month with a dramatic turn of events. Claire Fraser (played by Caitriona Balfe) was horrifically captured by Lionel Brown (Ned Dennehy) and raped by his gang, leaving Starz viewers utterly devastated for their protagonist.

During this ordeal, Claire coped with her trauma by envisioning a stylised version of her life in her mind.

These dreams saw her and her husband, Jamie Fraser (Sam Heughan), living in a 1950s era world.

Brianna Fraser (Sophie Skelton) and Roger MacKenzie (Richard Rankin) were also present during these visions and illustrated their lives further.

However, during these visions, Claire saw Brianna and Roger being killed off in a tragic car crash.

Considering Claire has had odd visions and looks into the future before, could this vision she had during her time in captivity have been a glimpse into the future of her daughter for season six?

If this is the case, Claire may never even realise her daughter and son-in-law are dead, as they may venture back to the future, cutting all communication between them.

This would, of course, be a devastating turn of events for the character, as she would have to relive losing her loved-ones in a car crash.

But, considering Claire now has the fear of this event happening, could she somehow go on to prevent it?

Elsewhere in Outlander news, Sam Heughan, the actor who plays Sam was originally not well-liked by Outlander author Diana Gabaldon.

The writer recently explained in an interview that she wasn’t his biggest fan upon first seeing him.

She explained: “At this point he had relatively little film work and just a series of extremely bizarre still photos – his IMDb page is strange.

“Some of his photos are strange! I was sitting there typing, ‘this man is grotesque, what are you thinking?’”