Outrage after nurses forced to treat patients WITHOUT full protective... 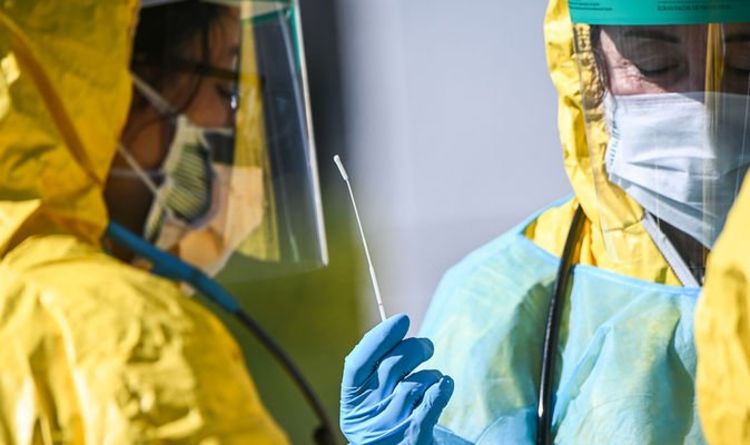 Public Health England reversed the decision over fears some hospitals were 24 hours away from running out.

In a tweet, NHS Providers CEO Chris Hopson said: “We have now reached the point where the national stock of fully fluid repellent gowns and long-sleeved laboratory coats will be exhausted in the next twenty-four to forty-eight hours.”

He added national leaders had left “no stone unturned” but gowns ordered weeks ago were only arriving in “fits and starts”.

Dr Harwood said: “I don’t think any healthcare worker should be expected to expose themselves to potential risks to their lives during the course of their work.

“It’s a real disappointment to us that the Government has been unable, even after a month to address this progressively worsening shortage of PPE.”

Host Kirsty Wark proceeded to ask whether workers would fear for their safety in this environment.

Dr Harwood replied: “All healthcare workers will feel torn about having made such a critically difficult decision such as this.

A Department of Health of Social Care spokesman said: “New clinical advice has been issued today to make sure that if there are shortages in one area, frontline staff know what PPE to wear instead to minimise risk.”

Health Secretary Matt Hancock blamed the revelation on a worldwide shortage of PPE.

Mr Hancock told MPs: “Given that we have a global situation in which there is less PPE in the world than the world needs, obviously it’s going to be a huge pressure point.”

He insisted he was trying to get PPE to staff by the weekend and the Government was doing all it could to get protective equipment to the frontline.

On Thursday, the Government confirmed there had been 27 verified deaths amongst NHS staff due to coronavirus.

Deaths of retired staff who still work within the NHS are not believed to be included in that toll.