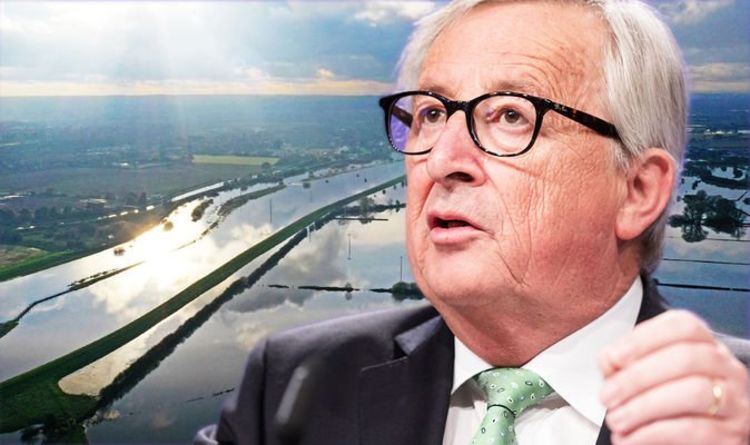 EU directives on “habitats”, “birds”, “water” and “floods” have dominated the UK’s river management strategy for nearly 20 years. The Government’s hands have been tied by a vast list of European Union directives, critics say. The Environment Agency must obey strict rules set in the EU Water Framework Directive to protect wildlife and plants when implementing its dredging strategy.

While the Government has the final decision on whether to clear water channels of silt build-ups, sources have told Express.co.uk that the process is severely hindered by EU rules protecting the “ecological health of rivers”.

The EU insists flood risk management “should work with nature, rather than against it”, according to a note released by the bloc’s environment department in 2011.

Work dredging the country’s waterways has been significantly scaled back because of the huge costs of disposing of silt under the EU Waste Framework directive.

The European Commission categorises dredged material as waste rather than a natural resource, making its disposal costly and time-consuming.

Britain has been blighted by flooding in recent days, with 34 more warnings still in place across England, from Somerset and East Sussex to the Lower River Nidd near Harrogate in Yorkshire, and seven across Wales.

Farmers argue that the recent floods in the East Midlands and Yorkshire could have been avoided if more preventative measures were rolled out.

Stuart Roberts, the vice-president of the National Farmers’ Union, has warned the Government it needs to be more proactive with its dredging strategy.

He said: “As has become abundantly clear over the past few days, it is essential that flooding and water management in river and coastal areas is properly funded and properly prioritised to protect urban and rural businesses, infrastructure and communities.

“With more extreme weather becoming ever more common, the Environment Agency must prioritise essential maintenance of flood defence assets and watercourses which have been neglected for decades.

“Crucially, the importance and value of our agricultural land must not be overlooked with food and farming contributing over £122 billion to the national economy and employing over four million people.”

MUST READ: River levels in YOUR area: Your home at risk of flooding? Track here