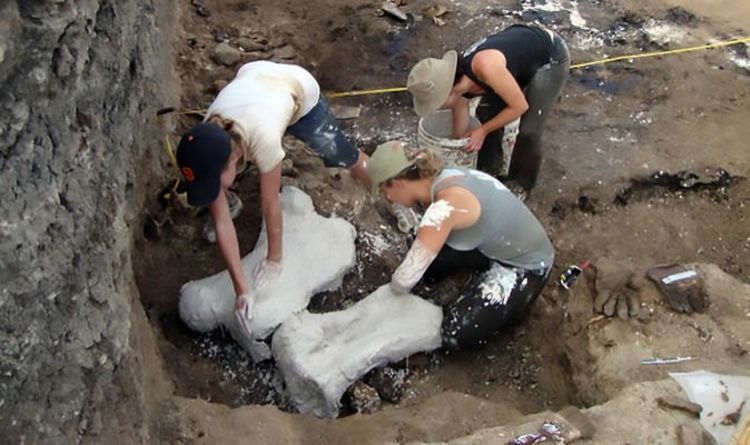 The fossilised remains of 22 elephant-sized sloths dating back to the Ice Age have been found. Palaeontologists made the grand discovery preserved in asphalt during a dig at the Tanque Loma site in the Santa Elena peninsula, western Ecuador.

The fossils of the Panamerican ground sloths, known as Eremotherium laurillardi, were spotted during this dig.

Experts believe these creatures roamed the Earth in modern-day Ecuador some 20,000 years ago.

Elephant-like in size, the sloths may have weighed several tonnes.

Dr Lindsey explained to Gizmodo: “For years, everyone has thought of the classic scenario at the La Brea Tar Pits, where a large herbivore would get stuck in asphalt, then a bunch of carnivores would be attracted to the trapped animal and get stuck.

“Nothing got stuck at Tanque Loma! The animals died in an aquatic setting like many other fossil sites, and the bones just fortuitously got preserved by seeping asphalt.”

A fossilised human footprint was found nestled inside a giant sloth footprint in April 2018.

Experts now believe the series of surprisingly well-preserved set of tracks describe the story of an ancient sloth hunt.

This was because inside the outline of the sloth’s 20-inch-long foot was a human footprint.

There were at least 10 of these tracks, all lined-up in a row.

Professor Matthew Bennett of Bournemouth University said in a statement: “It slowly dawned on me what was happening.

“Thousands of years ago, a ground sloth had walked along this site, and a person had followed it, carefully matching its every step.