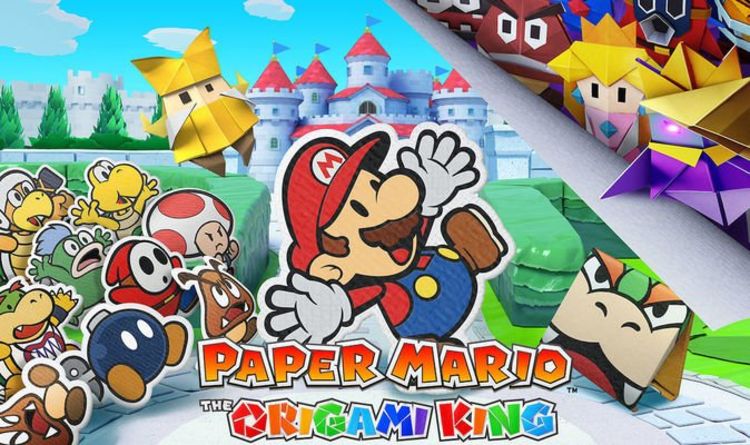 The problem with perfection – as I’ve pointed out previously with Bloodborne and The Last of Us – is that it’s really difficult to follow up with something on par or even better.

In the case of the Paper Mario series, Gamecube classic The Thousand Year Door is the gold standard in which all Paper Mario games – including Origami King on Nintendo Switch – will be judged.

The bad news is that Origami King doesn’t hit the same heights as its Gamecube forebear – very few games do – but it is a step in the right direction.

In fact, if you take away the arguably unfair comparisons to TTYD, this is one of the most entertaining games on Nintendo Switch, even if it does feel a little shallow.

In Mario’s latest adventure, Princess Peach hasn’t just been kidnapped, she’s been transformed into a mindless origami minion of the devious King Olly.

Not only that, but Princess Peach’s Castle has been completely uprooted and sealed shut with magical streamers.

Needless to say, it’s up to our moustachioed hero to save the day, only this time with the aid of King Olly’s sister Olivia.

The premise may be as paper thin as the world in which it’s set, but the script and storytelling is anything but one-dimensional.

Throw in a host of interesting and unique locations, not to mention a bright and vibrant colour scheme that practically burst out of the screen, and you have a game that’s as pleasing on the eye as it is on the funny bone.

Unfortunately, the shallow battle system and the under-baked RPG mechanics are where things begin to unfold.

The puzzle-like battles take place in circular arenas with our moustachioed hero Mario at the centre. Mario’s origami opponents surround the plumber on different rings that must be spun and shifted into the most advantageous position possible.

It’s an interesting twist on the traditional turn-based battle formula, where the aim is to line up Goombas for Mario to bounce on, or group them together for a hefty hammer smash.

Sadly, the novelty soon wears off and the battle system eventually runs out of steam, especially when there’s no real levelling up or party system to speak of.

You will occasionally meet supporting characters along the way, but their influence is short-lived and they don’t really add their own unique spin to battles.

Boss battles flip the script completely, as Mario works from the outside of the arena in, using arrows and items to close in on enemies such as coloured pencils, elastic bands and even a giant hole punch.

It’s a shame these epic battles are comparatively few and far between, because the enemy-specific attack and defence mechanics make them far more involved and interesting than regular encounters.

The boss fights also prove that the ring-based battle system has a lot of potential, but only when the stakes are high enough for the outcome to matter.

Still, while I would prefer a more traditional role-playing experience with party members and levelling up, I did thoroughly enjoy my time with Paper Mario: The Origami King.

It may be a bit on the shallow side, but even the most stony hearted and cynical will have a hard time resisting Paper Mario: The Origami King’s charms.