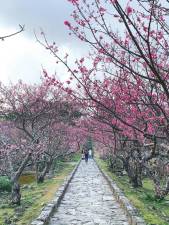 BEFORE embarking on this trip, I was told Okinawa is a paradise both to the locals as well as visitors. Indeed, I found myself wanting to stay on after my fabulous adventure.

For first timers and young children, visiting the Ryukyu Mura Cultural Theme Park is a fun way to brush up on the history of the island. While there are no rides here, the performances and activities are engaging.

We decided to join a treasure hunt around the park, where we collected stamps at various locations to redeem a prize upon completion.

Walking around the park exposes visitors to traditional architecture and building techniques, such as a ‘himpun’ wall in place of gates.

A himpun wall not only protects the main entrance of the house from strong winds, but it’s believed to deter evil spirits from entering. This stems from the belief that spirits cannot turn corners.

The highlight of the trip were the traditional performances such as Eisa Taiko drumming and the humorous Shishimai (Okinawan lion dance). Towards the end of the show, the crowd was encouraged to join the Kachashi folk dance by waving their hands in the air.

A visit to the Busena Marine Park blessed us with a peek into the underwater world. A glass-bottom boat ride and a journey down an underwater observatory let visitors closely admire the beautiful fish among the corals.

The Okinawa Churaumi Aquarium further showed the diversity of marine life here. At the touch-and-feel tank, visitors can feel the starfish and sea cucumbers.

I was surprised to discover that the spiky-looking sea cucumber is as soft as a fur scarf. Given its proximity to the ocean, families get to see large marine animals such as whale sharks, manatees and manta rays swimming in front of them.

Over at Nakijin Castle, a panoramic view of the coast and the beautiful Kanhi Sakura cherry blossom trees lining the pathways awaited us. Upon closer inspection, visitors may find ammonite fossils embedded in the castle walls, because the rocks come from primeval times!

Architecture enthusiasts will also relish that they can observe the various ways residents of the times stacked stones to form functional walls. The walls were rebuilt after the rocks were used as projectiles during battles.

A second vantage point can be found at Kouri Ocean Tower. The journey started with a self-driving buggy ride up the hill to the tower.

Split into several floors, the museum showcased the history of Kouri Island, as well as the seashells that can be found on it.

Kouri Island is also dubbed Love Island, and visitors can find heart-shaped shells to gift to their loved ones.

At the peak of the tower, visitors are greeted with a panoramic view of the Kouri Bridge and the glittering sea.

Head over to L Lota Restaurant nearby to further take in the stunning view with good food.

Romantics will enjoy spending time at Cape Manzamo, perfect for strolls by the coastal cliffs facing the East China Sea, and for spotting the elephant-like limestone formation.

Thanks to clear waters, you can see the corals underneath the surface.

Couples can continue their romantic photoshoot at the Heart-Shaped Rock, a formation of two coral rocks protruding from the sea. The waves crashing around both rocks presents a majestic photo opportunity for lovebirds.

The mighty trees at Bise-Fukugi Tree Street are another secret gem. These trees that protect houses from strong winds also double as shade along the serene pathway. Families can end the evening by following a path to the beach to catch the sunset.

Last but not least, the Senagajima Umikaji Terrace provides the best view of the air strip. Families can either dine at one of the many restaurants there, go for a slow walk, relax in hammocks, watch a Senaga Starry Night lightshow or soak in an onsen.

Okinawans are known to live long into old age. This stems from the local belief that food and medicine come from the same source.

As such, the regional cuisine passed down from their ancestors is perfectly balanced to ensure optimal health and longevity.

Surprisingly, Okinawans eat all parts of the pig, and the local Agu pork comes well recommended. Pork dishes are prepared ‘healthily’ by cooking until all the fats break down.

Throughout the trip, we were served sides of mozuku (kelp), goya (bittergourd) and shikwasa (a local lime variety).

Each has potent vitamins and antioxidants for the body.

An interesting dish I tried was umibudo (sea grapes). Umibudo goes well with sashimi, and gives a salty yet refreshing taste when it pops in the mouth.

While being health-conscious, the locals do enjoy their soul food, such as Okinawa soba. This hearty broth dish is usually accompanied by bonito flakes, pork and seaweed.

A sip of Awamori (liquor made from Thai rice and black Koji mold) doesn’t hurt, either.

There are two good places to shop till you drop in Okinawa, namely the new PARCO City, and Okinawa Outlet Mall Ashibinaa. Visitors can find familiar branded shops and Okinawan brands at both locations.