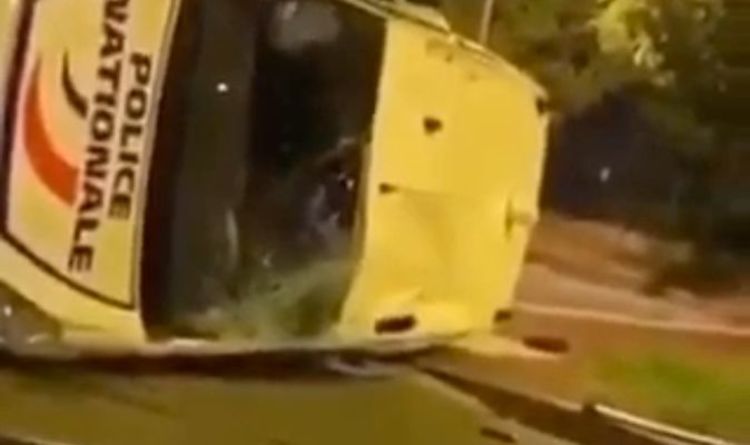 The video showed chaotic scenes of what appears to be a Strasbourg police station lit up in flames. Furious protesters fuel the fire by launching objects into the burning building in protest to police’s alleged “heavy-handedness” to ethnic minorities during the coronavirus lockdown in Villeuneuve La Garenne, Paris.

The caption read: “Police station on fire in Strasbourg in support of #VilleuneuveLaGarenne”

Some French social media users showed support of the footage, with one user commenting that they hope the fire brigade won’t make the “mistake” of extinguishing the flames.

Police appeared to have arrived on the scene.

One social media user claims a policeman seen at the incident threatened to shoot the next person to throw the flammable objects into the fire, although this was not confirmed.

Other videos showed several police cars and bins being set alight in protest to alleged police brutality on ethnic minorities during the coronavirus lockdown.

The series of protests followed prosecutors opening an enquiry after a 30-year-old motorcyclist, reportedly from an Arab Muslim background, was critically injured.

The man was injured after a collision with an unmarked police car in the suburb.

Residents claimed the incident was an example of police heavy-handedness against ethnic minority communities during the lockdown.

“Lots of fireworks fire this evening at #VilleneuveLaGarenne, tensions underway in several neighborhoods, notably in the northern suburbs,” he wrote.”

However, shortly after Parisian police were filmed manhandling Mr Bouhafs, who is from an Algerian background, and holding his arms behind his back.

A local police spokesman said: “Police and their reinforcements have been the target of rioters, who have thrown stones and fireworks.

“The violence started in Villeneuve-la-Garenne and has spread to other towns and estates nearby.”

The news comes after prosecutors in Béziers, in the south of France, announced that officers were facing criminal charges last week for a seperate incident.

They are facing charges after a father-of-three died while under arrest for breaching the coronavirus lockdown.

Three officers were videoed dragging Mohamed Gabsi, 33, along the ground during a curfew.

They are suspected of “intentional violence by a public official leading to manslaughter” and “non assistance of a person in danger”.

The offences come with a potential combined prison sentence of 15 years plus, said local prosecutors.

Mr Gabsi had suffered a heart attack by the time he arrived at a local police station.