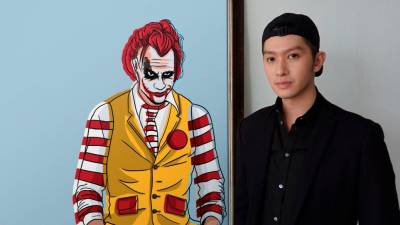 JAHOW SEE is particularly fond of dark humour. His satirical merging of pop culture and art is quirky and witty by nature, although some of his pieces can be morbid and sinister.

The 30-year-old illustrator created Parody Parlour in 2018, shortly after leaving his sister’s business in Shenzhen, China to pursue a passion he never thought he could realise.

He shares: “I would draw whenever I’m free. Over the years I’ve produced quite a number of artworks to finally launch Parody Parlour.”

His debut series, the Redirected collection, includes some of our favourite superheroes depicted in unexpected situations, such as The Flash taking on a new job as a pizza delivery guy. And have you ever wondered what is the secret to Thor’s lustrous hair? Introducing #Thoreal, because you’re worth it.

What spurred your interest to create a series of pop art parodies?

“I realised I have a lot of silly and funny thoughts; basically reenacting ‘what-if’ scenes in my mind whenever I watch a film, read a magazine or even speak to someone.

“It was hard for me to verbally express these scenes stuck in my head, so I figured the best way to do that is through art with dark humour.

“By exploring these comical thoughts, I also see them as ice-breakers, which people have come to appreciate thanks to platforms such as 9GAG and Comedy Central.”

What is the purpose of a parody?

“For the longest time, comical jokes and even parodies have been in our lives, you see them in magazines and in newspapers.

“I think it’s a form of entertainment; [and has] a great purpose, in fact, to be able to bring joy and make people laugh even if it’s just for a few seconds.

“On the flip side, some people do identify my work as being disrespectful and insensitive towards the characters, but that’s totally fine because art is not for everyone, I can’t expect everyone to understand and accept it.

“Art is all about being unique. I may be doing contemporary art but I’d hate to categorise my work and put labels on them. I’d like to keep Parody Parlour as casual as possible, creating artwork that is not confined under a specific set of rules, and is without any influence or pressure. Parodies should always be fun.”

What qualities make a public figure worthy of being parodied?

“The character has to be famous, [someone whom] the audience is familiar with and are interested in. The common adage of ‘art is subjective’ is quite on point. You may understand my interpretation of artwork, but others might not.

“I also don’t interpret [or] feel strongly for everything that I see. Everyone feels and perceives things differently, so it’s really a matter of finding a common ground from an artist’s standpoint, creating art that everyone can relate to without being biased.

“I guess you can say everything is by coincidence, where inspiration and thoughts come naturally and not forcefully; it’s very intuitive and instinctive.”

How can parodies with dark humour brighten the current times of social change and upheaval for the better?

“I have not thought of that. I don’t think my work holds the significance to influence any change at times like this.

“What I’m doing is just to entertain people through art, hopefully, that will bring joy even on the smallest scale.

“Turning art into parody with dark humour is an exceptional niche interest, hence, attempting to tap into the mass public is harder to achieve. There’s a gap in which I’m trying to fill through Parody Parlour, because there’s scarcity in value, to explore and expand.

“I’m just doing what I love, by sharing my kind of humour in an artsy approach.”

Where do you draw the line when creating work that might be too offensive and controversial?

“I try to stay within the grey space and be careful in my interpretation and appropriation of the characters.

“I have quite a few extreme artworks that I couldn’t share because they might be too sensitive, and obviously,

I don’t want to offend anyone, so for those artworks, I’ll put [them] inside my archive. Who knows, maybe one day I’ll release them.”