Pelosi warns Trump not to reopen country too soon 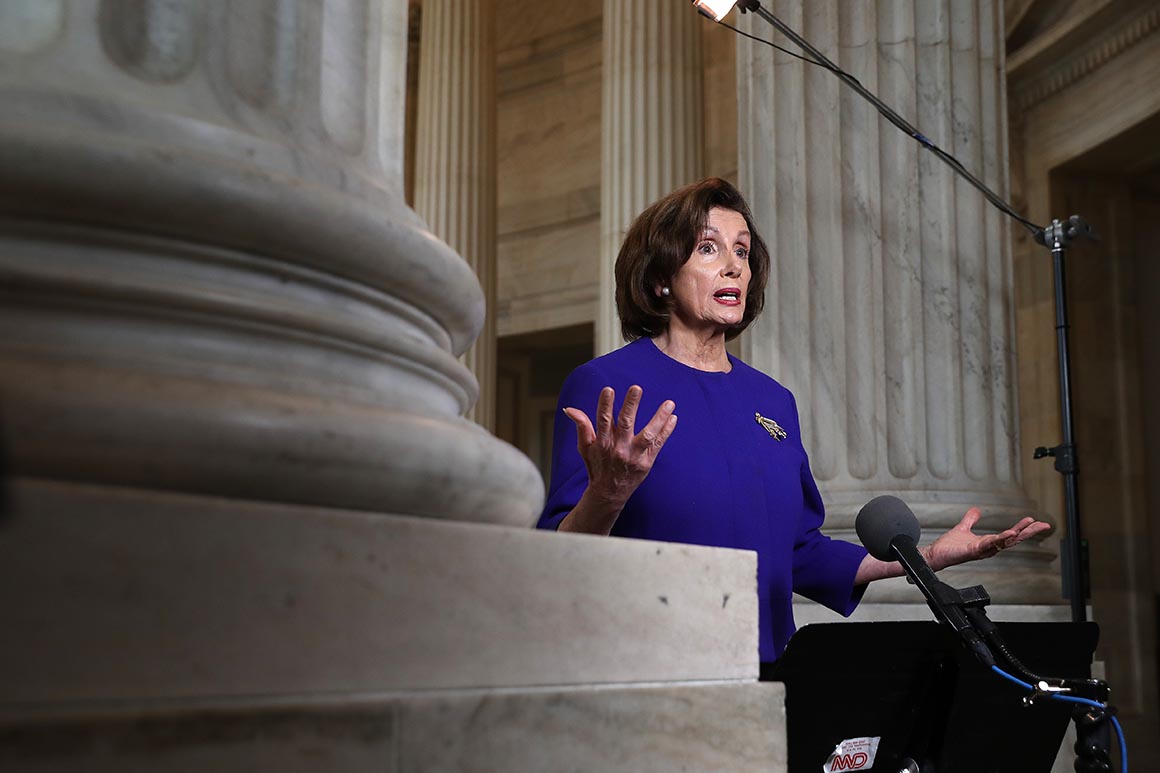 Speaker Nancy Pelosi signaled Thursday that the House is unlikely to return to session later this month, her clearest indication yet that Congress — like the rest of the country — could remain shuttered for weeks or even longer as the coronavirus crisis continues.

In a half-hour interview, Pelosi issued a stark warning to President Donald Trump, urging him not to prematurely reopen major segments of the country before the coronavirus is under control, which she said could further send the U.S. economy into a tailspin.

“Nobody can really tell you that and I would never venture a guess. I certainly don’t think we should do it sooner than we should,” Pelosi said when asked whether she still planned to bring the House back on April 20, which is the current target date.

“This has taken an acceleration from when we started this. … Little did we know then that at this point, we’d be further confined.”

The California Democrat’s comments come as the coronavirus continues to spread rapidly across the United States, with roughly 430,000 Americans diagnosed and at least 15,000 deaths. Even though some hard-hit areas such as Washington state have seen cases appearing to be leveling off, health officials have warned the numbers are going to increase dramatically in the coming weeks.

Trump, meanwhile, has done little to hide his impatience as the economy teeters while millions of Americans have been ordered to stay at home to further prevent the spread of the virus. Just Thursday, Trump — who faces reelection in just seven months — again expressed his desire to see Americans get back to work quickly.

But the nation’s governors, not Trump, exercise enormous control over such decisions, complicating the timing of restarting the economy. And CEOs and other business leaders will face hugely complex questions of when they can start safely bringing employees back to work, all of which will challenge a president who goes before voters this fall even as unemployment rates skyrocket to levels not seen since the Depression.

“I would hope that the scientific community would weigh in and say, ‘You can’t do this, it is only going to make matters worse if you go out too soon,’” Pelosi said when asked whether she was worried Trump, with an eye on a second term in the White House, would try to reopen the country too soon.

Pelosi suggested there are numerous factors that would need to be assessed in making such decisions, including the possibility of secondary infections.

“What is it? Is it testing so that we know what we’re dealing with? Is it some standard as to how someone else would be received into a workplace?” Pelosi said. “We have to know. It’s data. And that’s something that I haven’t seen as the basis for any decision-making. In fact, I’ve seen the opposite.”

Pelosi also said she hasn’t watched Trump’s daily briefings, in which the president often contradicts himself or offers false or inaccurate statements that his own team of health officials then have to rebut in real time.

“I don’t watch them. I sometimes see inadvertently or just by accident some of the news reporting on it,” Pelosi said of the briefings, which sometimes stretch for more than two hours. “But I just don’t have time for that. I am a busy person. I have a day job, and it’s not to watch the president contradict himself on TV.”

Still, the speaker has been a media tour de force of her own in recent weeks. Pelosi has appeared on cable news shows at least once a day, sometimes more, during this period. That’s in addition to multiple radio and print interviews she’s held as high-stakes negotiations with Republicans over a multitrillion dollar coronavirus rescue effort continue.

Pelosi and Senate Minority Leader Chuck Schumer (D-N.Y.) wanted a portion of those funds guaranteed for minority- and women-owned businesses in addition to delivering another $ 250 billion for hospitals and state and local governments. Republicans objected, leading to a standoff on the Senate floor earlier Thursday.

The House will meet in its own pro forma session Friday but Pelosi, who is in California, downplayed the chance of any last-minute drama. Pelosi, a devout Catholic, said those negotiations will essentially be on hold this weekend as many Americans celebrate Easter. The Senate convenes again Monday, making it unlikely congressional leaders will have agreed to a deal by then.

“We have put our marker down for a negotiation,” Pelosi said.

Pelosi and Schumer are also working on the next major relief package, which the speaker earlier this week said could “easily” top $ 1 trillion. Republicans have been loath to embrace her swift push for another deficit-busting bill, saying lawmakers still haven’t seen data on how the government is implementing the $ 2 trillion worth of rescue funds signed into law late last month.

Pelosi and other congressional leaders have said they will almost certainly have to approve more funds to address the crisis, which could go on for months and has already caused at least 16 million Americans to file unemployment claims. Pelosi didn’t rule out coronavirus dominating the election in November, despite experts’ hopes that American life will have mostly returned to normal by then.

“That is the big question of everything,” Pelosi said, telling the story of how she was certain Democrats would win back the House in 2014 promising to protect Medicare until the Ebola outbreak became a worldwide emergency, consuming the national consciousness heading into the election.

“Any subject can upend any subject in all of this. But I feel very confident that elections are about the future,” Pelosi said. “This may have an impact in terms of eclipsing any messaging … [but] we will be having an agenda as we go forward that opens up opportunities for people.”

Pelosi also praised former Vice President Joe Biden, who has emerged as the Democrats’ presidential nominee for November after Bernie Sanders suspended his campaign this week. Pelosi — like Schumer — stayed neutral during the primary, but with Biden emerging as the presumptive nominee, Pelosi praised the choice.

“I think he’s fabulous. He’s a person of great values, great patriotism,” Pelosi said of Biden. The two served for several decades together in Congress, and then had extensive interactions during Biden’s tenure as vice president.

“He knows the role of government — that we don’t want more than we want or than we need, but we need to have as much as required to do the job and meet the needs of the American people.”

“I think he’ll be a great nominee, and an even greater president of the United States,” Pelosi added.