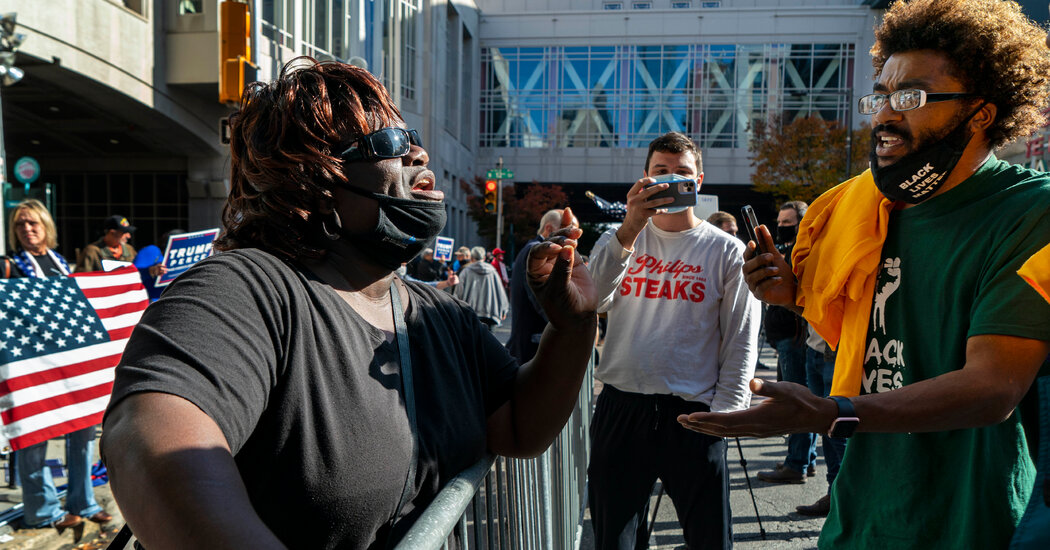 Ask anyone from Pennsylvania and they’ll tell you — they’re from Pennsylvania: the fifth largest state by population; second state admitted to the union; one of only four states that is actually a commonwealth, which is the same as being a state, except it’s actually a commonwealth; longtime home of Benjamin Franklin (not technically his birthplace but definitely his main thing that he loved); the birthplace of Patti LaBelle, Sharon Stone and others; a place that is wider, geographically wider, than you think (roughly 300 miles east to west).

For whatever reason, that portion of the United States that is not Pennsylvania tends not to find Pennsylvania riveting.

But now, as the anxious nation awaits the final tally of votes in the 2020 presidential election, all eyes are glued to Georgia, Nevada, Pennsylvania and Arizona — or, as people from Pennsylvania interpret it: to Pennsylvania.

Although Pennsylvania (home state of Meek Mill and James Stewart) has long been regarded as an election swing state due to the heterogenous political composition of its residents, the extra attention paid to Pennsylvania this election cycle is the result of an imbroglio of its own design: a prolonged ballot-counting period brought about by the Republican-led state legislature’s refusal to allow mail ballot tallying to begin earlier than usual, despite what was expected to be (and turned out to be) an extraordinarily high number of mail ballots.

While in Georgia, vote totals for Donald J. Trump and Joseph R. Biden Jr. are expected to be separated by a hair’s-width margin, government officials in Pennsylvania have been predicting a comfortable win for Mr. Biden for days. It’s just taking a long time to note it. (Philadelphia’s mayor, Jim Kenney, referred to Mr. Biden on Friday morning as the “winner.”)

Understandably, many Americans have been frustrated at the slow trickle of results. “The human body was not made to expend this much energy thinking about Pennsylvania,” Stephen Colbert tweeted at 7:13 p.m. Pennsylvania time on Election Day — with still days of counting left to come.

Then, days into the national election effectively being held hostage (in part) by Pennsylvania, social media users — or at least those rooting for the democratic candidate — suddenly gave in to Stockholm syndrome. They gleefully warned of the foolhardiness of anyone who would travel to Philadelphia to start trouble, swapping tales and impressions of the seemingly deranged conduct of its residents under normal circumstances.

“With everyone all interested in Pennsylvania,” tweeted the state’s lieutenant governor, John Fetterman, as bleary, fraying Americans prepared for another sleepless night of waiting for Pennsylvania to finish counting votes, “I wanted to remind you that one crackerjack LG had 500 pounds of delicious PA butter crafted into a fitting tribute for Gritty this year. #ButterGritty.”

The text was accompanied by a photo of him posing with a monstrous butter sculpture of the demented Philadelphia Flyers hockey mascot — a mascot people in Philadelphia mocked when it debuted in 2018, until people outside Philadelphia began to join in, at which point the City Council passed a resolution officially honoring “the spirit and passion that Gritty has brought to the City of Philadelphia.”

Earlier in the week, conservative political commentators had encouraged supporters of President Trump to travel to Philadelphia to demonstrate their displeasure with the continued ballot-counting that appeared poised to deliver a victory to Democrats.

“The great thing about Philadelphia is you literally can’t insult them,” declared one Twitter user on Thursday afternoon. “They take any attempt at insult as either a compliment or an offer to fight which is also a compliment in Philly.” Judging from social media response to the commentators’ scrutiny, that sentiment could well be extrapolated to describe the entire state where, as you likely know, “Rocky,” “Rocky II,” “Rocky III” and “Rocky V,” as well as all of the big M. Night Shyamalan movies, were filmed.

Philadelphia election officials announced on Friday that they would release the results of another 2,000 to 3,000 ballots before the day’s end. These updated tallies will leave still tens of thousands of ballots left to be counted, ensuring that, for just a while longer, Americans will continue to view goings-on in Pennsylvania the way Pennsylvanians always have: as interesting and notable events.