Pentagon releases video of US troops destroying compound in al-Baghdadi... 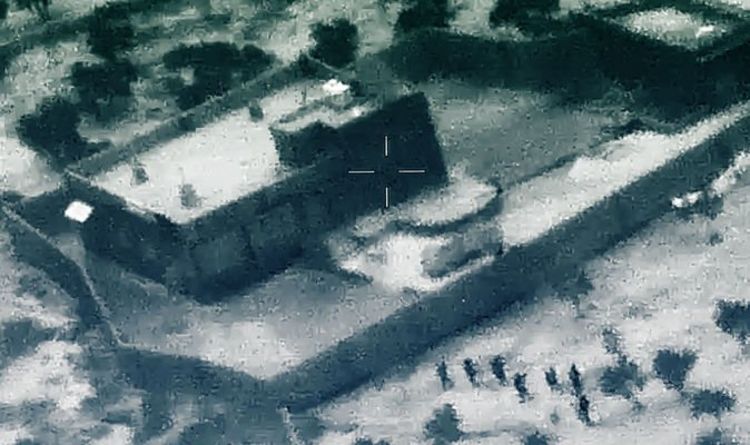 The video shows an aerial view of the Delta Force raid, which resulted in the death of ISIS leader Abu Bakr al-Baghdadi. The footage was released by Marine Corps General Kenneth F. McKenzie Jr, commander of US Central Command at a press conference on Wednesday. In the video, special forces can be seen raiding the compound before the explosion.

Before and after pictures are also shown of the compound.

The commander of US Central Command said: “This is a video of the assault force actually closing up to the compound.

“Those who came out of the building were checked for weapons and explosives and moved area from the immediate area. US forces detained and later released the nine combatants. The group was treated humanely at all times and included 11 children.

“I want to make it clear that despite the violent nature of the raid, in the high-profile nature of this assault, every effort was made to avoid civilian casualties and to protect the children that we suspected would be at the compound.

“5 ISIS members inside the compound presented a threat to the force.”

A Washington spokesman has warned that the fight against the extremist jihadist group is far from over despite the US military’s successful raid on Sunday which led to the death of ISIS leader Abu Bakr al-Baghdadi.

The US State Department said in a statement following the raid: “The United States is determined to prevent a resurgence of ISIS in Syria and Iraq and continues to work with the Global Coalition to destroy ISIS remnants and thwart its global ambitions.”

The US Government official said that President Trump, by announcing the withdrawal of US forces from northern Syria on October 6, did not suggest that Washington was abandoning the fight against ISIS.

It was confirmed by a Washington official on Tuesday that the body of al-Baghdadi was disposed at sea in a secret location, a similar burial to that of Osama bin Laden, the former leader and founder of al-Qaeda.

Security officials in the US apparently decided it was risky to have a known grave in case it became a shrine to the world’s best-known terrorist.

Foreign Ministers will arrive in Washington on November 14 to discuss the mission in-depth.

French President Emmanuel Macron said al-Baghdadi’s death was a major blow against ISIS, but “the fight continues to finally defeat this terrorist organisation”.

British Prime Minister Boris Johnson said: “We will work with our coalition partners to bring an end to the murderous, barbaric activities of Daesh (ISIS) once and for all.”