Peter Crouch, 39, who is the host of his new BBC show Save Our Summer, has opened up about his meeting with Prince William. The former professional footballer admitted he “didn’t say anything” to the Duke of Cambridge on the two occasions he met him.

Speaking in a new interview, the podcast host opened up about meeting Prince William and added he was “taken aback”.

“I had so many things I should have said back,” Peter told Radio Times. “But I was so taken aback I didn’t say anything.

“I’ve met him a couple of times, and Prince William. And they were both great. Really down-to-earth normal fellas.”

His remarks come after Peter met with the Duke of Cambridge last year, to have a conversation about mental health.

Sitting in a dressing room among other players, past and present, including Peter Crouch, Thierry Henry and Jermaine Jenas, Prince William prompted them to open up about their own experiences to show men across the country they needn’t suffer in silence.

Peter, who is 6ft 7in, told the group he struggled with body image particularly as a teenager.

“I had these hang-ups and I always used to cry,” he said.

Elsewhere, the former Liverpool striker also recalled the moment he met Prince Harry at a UNICEF charity match in 2015 when speaking to Radio Times.

Peter was cheekily quizzed by the former royal how he “bagged” his wife Abbey which he admitted was “hilarious”.

He added his wife was “over the moon” about the compliment.

The Save Our Summer host and Abbey, 34, have been married nine years after tying the knot in 2011.

Speaking about the moment the pair first met on The Chris Moyles Show on Radio X, he said: “She gave me her number – amazingly – she went away, and I just carried on with my evening, and I should have known then, but I was talking to someone else who was also female.

“She came over and said ‘Look at you! Who do you think you are?’ as if we were married already.

“She went mental! And I was like ‘I’m only talking’. I should have known then!”

Elsewhere, Peter’s new Save Our Summer which featured presenter Maya Jama and comedian Alex Horne aired on the weekend. 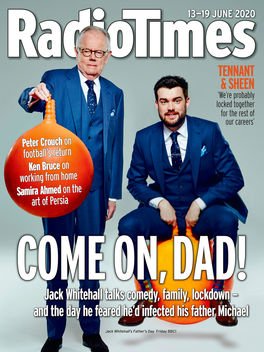 The programme was originally intended to be a post-match series for Euro 2020 but it has since been transformed into a wider entertainment show.

“So we thought we needed to bring smiles to people’s faces, so instead of it being around the Euros, we tried to make it around all those things.”

You can read the full interview with Peter Crouch in this week’s Radio Times – out now.