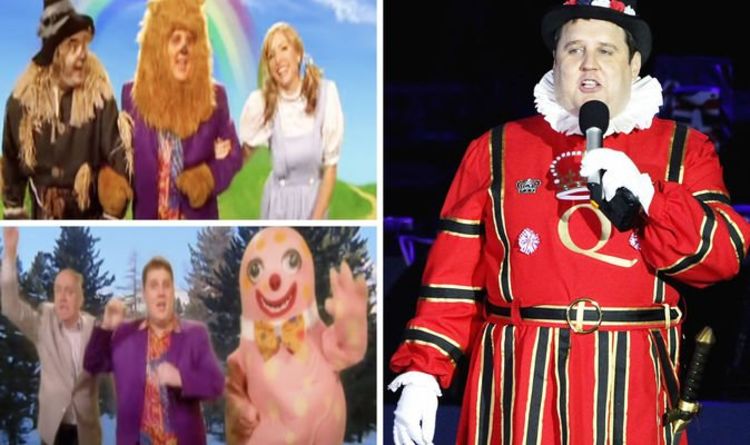 Peter Kay’s version of ‘Amarillo’ would go on to become the most popular Comic Relief single of all time. It sold more than 1.28 million copies after it was released in 2005. The accompanying music video showed the star lip-sync the song while walking on the spot alongside a star studded line-up of comedians, musicians and actors. The song won over audiences up and down the country and quickly became a karaoke go-to for many. But behind Peter Kay’s decision to release the big hit was a sweet story from his childhood and early days on the comedy circuit.

The song, originally released by Tony Christie, tells the tale of a young man marching his way to ‘Amarillo’, a city in Texas, US, to be reunited with his doting girlfriend Marie.

In the background, greenscreen footage showed hills, deserts and an array of amusing scenes as well as another surprise – cameos from Mahatma Gandhi and Cliff Richard lookalikes.

While the performance was a hit, it was not the first time Peter had used the song in his act and originally he had taken the idea for it from his childhood.

The star, who will feature in BBC show ‘The Big Night In’ this Thursday, explained more in his 2010 book ‘Peter Kay: Saturday Night Peter’.

Growing-up the performer had taken influence from some of the comedy greats, including Ronnie Barker who he established an unusual friendship with.

He adored the way some comics were able to “paint the whole picture” and admitted: “That’s what’s what I wanted to be able to do.”

Peter listed some of those favourites he admired for their “anecdotal style” of comedy including Jasper Carrott, Billy Connolly and Dave Allen.

He said: “When Billy Connolly talks about going to a church dance at school, I can actually see the dance, the windows, the people in the room.”